Following an acclaimed premiere at the Klein Karoo Nasionale Kunstefees, a new production of Athol Fugard’s powerful classic – Statements after an arrest under the immorality act comes to The Fugard Studio Theatre from 17 September for a limited season. 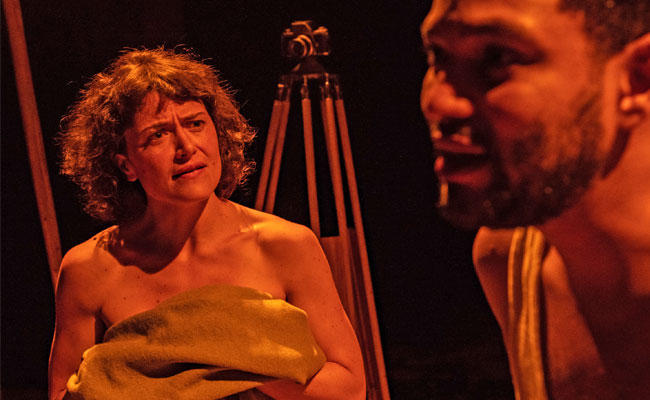 Liezl de Kock and Marlo Minnaar in Statements after an arrest under the immorality act. (Photo credit: Claude Barnardo)

Presented by Eric Abraham and The Fugard Theatre in partnership with the Klein Karoo Nasionale Kunstefees, this compelling new co-production directed by Greg Karvellas opened to rapturous responses at the recent KKNK, with praise including, “Marlo en Liezl lewer ’n onvergeetlike vertolking”, and was nominated for five Kanna Awards.

This year marked the 25th anniversary of the KKNK and Kunste Onbeperk, which presents the Festival, and that recently awarded Athol Fugard with its Kunste Onbeperk Lifetime Achievement Award for Theatre.

Other acclaim for the production included comments such as:

Written in 1972, Statements after an arrest under the immorality act is set in apartheid South Africa, where relationships across the colour bar were a criminal offence.

Two lovers – a coloured man and white woman meet secretly in the library where the woman works to make love and share their hopes and fears. A neighbour reports them to the police who secretly photograph them from the informant’s backyard and eventually break in and arrest the couple under the then inhuman and universally pilloried Immorality Act.

The play is a compelling and deeply moving love story in which the physically and emotionally naked lovers expose not only their bodies but also their deepest longings for personal and emotional freedom.

“It was an honour to bring this classic play to life as part of the KKNK’s 25th birthday celebrations,” says Daniel Galloway, Managing Director of The Fugard Theatre. “We thank Hugo Theatre and his team for their vision, professionalism and creative excellence in partnering with us on this production. We can’t wait to present it to our Cape Town audiences.”

Athol Fugard was born in 1932 in Middelburg in the Karoo. An internationally acclaimed playwright director and occasional actor, for over half a century he has written almost forty soul-searing plays with roles for all South Africans which have moved audiences in South Africa and around the world to laughter and tears as they reflected the inhumanity of apartheid.

“The play is a compelling and deeply moving love story in which the physically and emotionally naked lovers expose not only their bodies but also their deepest longings for personal and emotional freedom.”

His plays champion truth and a fundamental universal humanity. In 2011 he received the ultimate recognition from the world’s most prestigious theatre community – a Tony Award for Lifetime Achievement in Theatre. He is also the author of four books and several screenplays.

His plays include Blood Knot, Boesman and Lena,Master Harold and the Boys, The Train Driver, The Blue Iris and The Shadow of the Hummingbird.

A number of his works have been turned into films with director Gavin Hood’s Tsotsi, based on his 1980 short story of the same name winning the 2005 Academy Award for Best Foreign Language Film – South Africa’s first Academy award in this category.

Athol’s work spans the period of apartheid in South Africa, through the first democratic elections, to Nelson Mandela’s presidency and into present-day, post-apartheid South Africa.

The recipient of numerous honorary doctorates and awards, Athol was awarded the prestigious Praemium Imperiale global arts prize for Theatre/Film by the Japan Art Association in 2014.

One of the most performed playwrights in the world, he continues to direct and write plays. He shares his life with his wife the writer and academic Paula Fourie and their dog Jakkals.