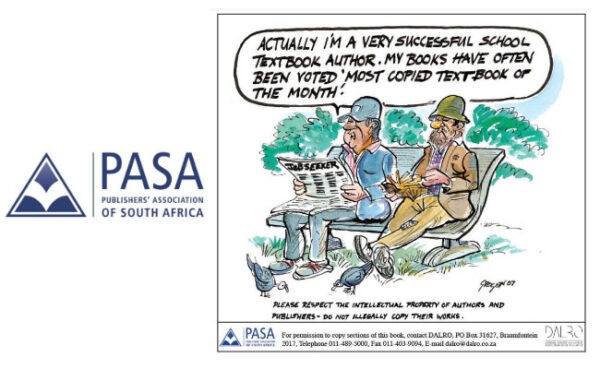 PwC estimated that the bill will lead to a 33% reduction in booksales with 30% of the industry losing their jobs.

The Publishers’ Association of South Africa (PASA) is concerned that the National Assembly is about to pass the controversial Copyright Amendment Bill for a second time, with only minor changes to the version that the President had referred back to Parliament in 2020 for reservations about its constitutionality and compliance with international treaties.

PASA has, since the Bill was introduced in 2017, together with other professional and industry associations repeatedly attempted to lay bare the deep-rooted flaws in the Bill, not least the devasting impact it will have on the South African economy for generations to come, should it be passed into law.

An investigation undertaken by PASA, with the Academic and Non-Fiction Authors’ Association of South Africa (ANFASA) and Dramatic Artistic and Literary Rights Organisation (Pty) Ltd (DALRO), brought to light that the Bill has undergone no associated impact assessment of its economic or other consequences.

A regulatory impact assessment promised by Government in 2015 never materialised. The reason given to PASA in 2016 was that the regulatory impact assessment procedure had been replaced by Government’s Socio-Economic Impact Assessment System (SEIAS). However, an unsigned and undated document tabled with Parliament in 2017 as a SEIAS report does not appear to have been properly compiled under the SEIAS Guidelines, and there is no other Government-backed study or research that assesses the economic impact that the Bill will have on South Africa.

According to Mpuka Radinku, PASA’s Executive Director, “The absence of an assessment on the economic impact of the Bill is a material deficiency in the legislative process, considering the Bill’s threatened detrimental impact on creative professions and businesses. In 2017, PASA commissioned PwC to undertake a study on some key provisions of the Bill, which concluded ‘that it would impose significant negative consequences on the South African publishing industry’.” The report can be found at: https://publishsa.co.za/pwc-report-on-copyright-bill-31-july-2017/.

PwC estimated that the bill will lead to a 33% reduction in booksales with 30% of the industry losing their jobs.

PASA and other South African associations representing creative professions and businesses have again called on the Portfolio Committee to recommend to the National Assembly that the Bill be rejected by Parliament on the basis that it is so defective that it cannot be corrected, and that the DTIC redraft the legislation with proper impact assessment.