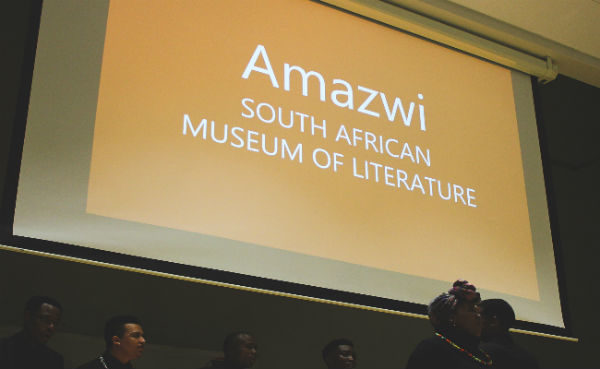 The principal custodian of literary heritage in South African, the National English Literature Museum (NELM) in Makhanda, has formally rebranded as the Amazwi South African Museum of Literature.

However, the Museum recently embarked on an exciting new journey of linguistic and cultural inclusivity, which will see the organisation expand its extensive literature collections to also include important literary works in indigenous languages.

Amazwi – meaning voices or words – has been adopted as the new name to more accurately reflect this broader, multilinguistic focus.

The Amazwi South African Museum of Literature's new identity and vision was unveiled by the National Department of Arts and Culture in Makhanda, at a ceremony which also marked the official opening of its new custom-built, state-of-the-art museum complex.

Speaking at the launch event, Deputy Director-General: Institutional Governance in the Department of Art and Culture, Kelebogile Sethibelo, stressed the importance of literature in recording the evolution of society.

"The decision to broaden the scope and the mandate of this institution to include all South African official languages was the correct one and needs to be applauded. This is an important step in deepening the social transformation of our country."

The Amazwi rebranding initiative dovetails with the Museum's wider vision of promoting social cohesion and national identity by sharing its diverse collections through exemplary research, exhibitions and public programmes.

Pivotal to this new mandate has been the development a new, community-centric Museum complex which is fully culturally, socially and educationally inclusive.

"The new building has sufficient collections' storage and exhibition space, as well as offices for additional staff – experts in the literatures of indigenous languages – to develop, curate and present exhibitions and educational programmes on an expanded mandate."

Credited as South Africa's very first "green" museum, the impressive, custom-built complex is the first of its kind in to be awarded a 5-Star Rating from the Green Building Council of South Africa, in recognition of its progressive energy- and water-saving innovations. (Read more about this impressive new facility at  http://bit.ly/2WvYnvY.)

While it is envisioned that Amazwiwill eventually incorporate literary works in all indigenous languages, the Museum will start by incorporating one language, IsiXhosa, as a pilot project.

"IsiXhosa has a long literary tradition linked to missionary education in the Eastern Cape and we are aware of collections of literary and documentary artefacts which can be purchased to form the nucleus of a new collection," Ms Dido noted.