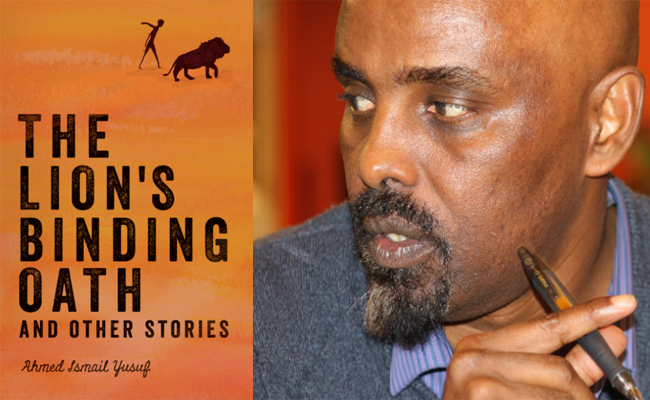 Ahmed Ismail Yusuf: The man without a birthdate

After fleeing Somalia, Ahmed Ismail Yusuf lived in several states but has lived in Minneapolis, Minnesota since 1997. He did not speak English when he arrived, he was a high-school dropout, and he was not sure what his actual age was. Today he has two college degrees and is the author of Somalis in Minnesota, published by the Minnesota Historical Society Press, and Gorgorkii Yimi, a collection of stories in Somali, published by Ponte Invisible. In February 2018, The History Theatre of St Paul, Minnesota produced his play, A Crack in the Sky, a memoir about how Yusuf found inspiration in Maya Angelou and Malcolm X during his early days as an immigrant to the USA.

The lion's binding oath and other stories

This collection of short stories, written by the Somali author Ahmed Ismail Yusuf, takes the reader into the heart of the Somali caste system. If one has read Arundhati Roy, one would now about the devastation caused by civil wars that had had their roots in a system of casts and religion. Yet, how many people know of the events on our continent that are so chillingly similar?

These stories are deceptively simple. They combine folk tales with everyday events – boys and girls who develop crushes, boys who play soccer and girls who adore poetry … Yet, underneath these storylines lies a web of inter- and intratextual references that combine seemingly haphazard narratives into a tightly-knit unity.

The first story is of a boy who has to face up to wild animals in order to protect his family’s goats and sheep. Then the scene changes: We are transported into the heart of the ongoing caste system in Somalia and we experience first-hand how people conduct themselves worse than any predator ever would, for the ills in Somali society gave way to a civil war that to this day has not been resolved. The stories remain personal, though: A mother tries to save her twin boys on the eve of Somalia’s collapsed state; a newlywed woman tries to save her sister from being raped by soldiers…

Yet, despite the horrors, the author finds beauty in simple, everyday moments. Boys and girls still fall in love. A teacher who has endured the shameful legacy of her outcast heritage encourages a young scholar to understand Somali poetry.

Somali folklore flows freely in and out of the fibres of these stories.

In the last story a boy, who flees from the civil war, befriends a lion. Not only does it complete the story cycle, it yet again draws on an old folktale.

Ahmed Ismail Yusuf’s simple narratives belie the fact that he is a masterful storyteller. This book is a must for all those who have appreciated Arundhati Roy’s novel The ministry of utmost happiness.

Catalyst Press is an independent publishing company founded in 2017. They seek to publish books that reveal the world from different perspectives, tilting or reversing or tweaking our own understanding of what’s real, true, necessary, or beautiful.

Catalyst’s publishing program will emphasize books emerging from the African continent. They aim to publish literature that exposes the truth and pursues justice and peace.

LAPA Publishers proudly returns these stories to our own continent. We will cherish them as our own.

The Lion’s Binding Oath and Other Stories is from leading retailers and direct from LAPA Publishers. Contact LAPA on 012 401 0700 or visit our website: www.lapa.co.za.