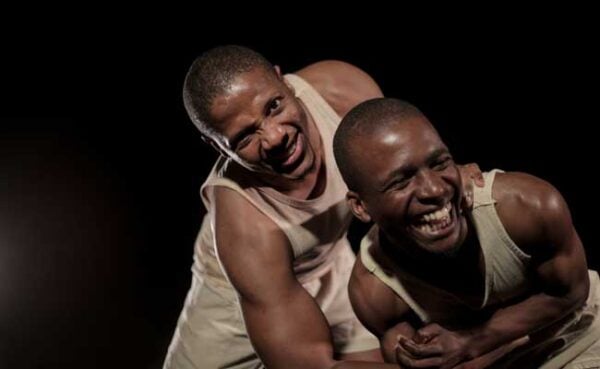 A brand new South African play, Four Fathers: Bananas for the Baboons, which explores black fatherhood and absent fathers in the country, premieres at the Baxter Golden Arrow Studio, from 3 to 20 August 2022 at 7:30pm nightly, with Saturday matinees at 2:30pm.

With this production, emerging young writer and director, Kitso Seti, makes his debut as a director. He is a theatre-maker, musician and blogger who holds a master’s degree in Politics at the University of Cape Town and his research is focused on how black (consciousness) theatre can be used to conscientise people and make sense of black positionality in the world.

“I use my art as a time machine, to travel back into the past, to where we think the destitution and disarray of Africa stems from,” explains Seti. “The idea is to make sense of the times we live in and our current standing in the world. In a quest to bettering the future, we need to retrace and investigate the steps that led us here. Africa is reeling from a long list of effects of colonialism, and the collapse of the black family is one of them. This production is my submission to the continual search for black voices in the telling of black stories, in a way we deem possible.”

The two-hander stars Buhle Qinga (Thank you for your Service) and Sivuyile Dunjwa (Heart of Redness), who take on the roles of two young boys in search of their father and their journey of discovery along the way.

Qinga was seen in the award-winning play, Thank You for your Service, which he co-wrote, co-directed and performed in and which won the Best of Baxter Zabalaza Theatre Festival award in 2021. Buhle is a versatile artist who trained in dance and theatre stage practice, and he holds a certificate in Community Arts and Culture Development from the Northwest University.

Dunjwa is a graduate from New Africa Theatre Academy and Magnet Theatre and as a trainee in Magnet Theatre’s Fulltime Training and Job Creation programme he performed in productions such as Running with Goldfish, Gift-Wrapping the Sea, Heart of Redness, the award-winning Tree/Boom/Umthi and Thabo Mbeki and Other Nightmares.

Four Fathers: Bananas for the Baboons, is one of two plays selected from The Baxter Masambe Playlab, where a cohort of 10 creatives attended a four-month long, writing residency, which was held at The Baxter last year and which offered writers time, space, peer-to-peer mentoring and financial resources to create new work. It forms part of The Baxter’s Platform for Special Talent programme which is made possible by the City of Cape Town.

Using different theatrical styles, the play follows two young boys who are on a quest to find their father and on their journey, they encounter surreal, ‘out of this world’ events that they never thought existed. They find themselves inside an exploration of South African history: a present visitation of the past as a contribution to improving the future. Their imagination takes them on a journey through three periods in time: the first 15 years of apartheid, from 1948 to the late 1960s; the 1906 Bambatha Rebellions and the Cattle Killing Movement of 1856, represented by Prophetess Nongqawuse.

The narrators of the play visit these three periods, to make sense of the current landscape and to learn from the past. At the core, they discover that men are at the forefront of these battles, begging the question: where are the fathers? And how has colonialism, with its offspring of apartheid and migrant labour, contributed to the absence of black fathers?

Set design is by Wayne Jacobs and Chris Spogter, lighting by Franky Steyn and costumes by Marisa Steenkamp, with music by Kitso Seti.

Performed in English, isXhosa and Zulu with English surtitles, Four Fathers: Bananas for the Baboons, runs at the Baxter Golden Arrow Studio, from 3 to 20 August 2022 at 7.30pm nightly, with Saturday matinees at 2.30pm. Tickets are R120 and booking is through Webtickets online at www.webtickets.co.za or at Pick n Pay stores. For discounted block or schools’ bookings, charities or fundraisers contact Carmen Kearns on email camen.kearns@uct.ac.za or call 021 680 3993.