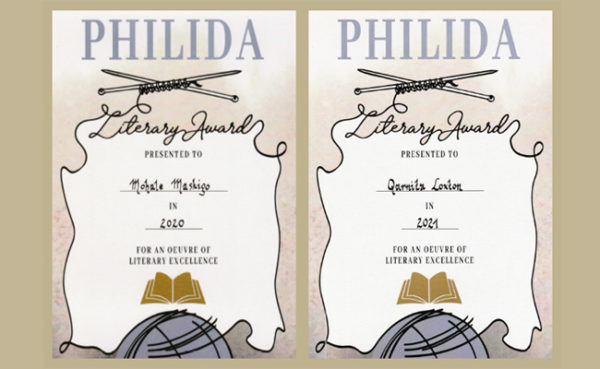 On the sixth anniversary of André Brink’s death, we pay tribute to his life and work and announce that the Philida Literary Award, established in his memory last year, goes to Qarnita Loxton and is awarded to her for an oeuvre of literary excellence.

Qarnita Loxton was born and lives in Cape Town. She has practised as an attorney in the financial services industry. Her first novel, Being Kari (Kwela, 2017), was longlisted for the 2018 9mobile Prize for Literature and shortlisted for the 2018 Charles Bosman Prize. Being Lily (Kwela) followed in 2018, and Being Shelley (Kwela), the third book in the series, a year later.

The Philida Literary Award is awarded annually to a writer mid-career for an oeuvre of between three and five books of any genre. Established in 2020 by Karina M Brink (writing under her maiden name Szczurek) in memory of her late husband, renowned author André Brink, the award recognises a writer with a consistent record of publishing works of excellence and aims to encourage them further in their pursuit of a literary career.

The award announcement takes place annually on the anniversary of André’s death, 6 February.

The award is named after a historical figure, the slave woman Philida van de Caab, a knitting woman, who entered South Africa’s archival records because of laying an official complaint against her masters, Francois and Cornelius Brink, distant relatives of André’s. She became the protagonist of André’s last published novel, Philida (2012). André’s rendition of her courage and resilience continues to inspire readers and writers around the world.

Each winner receives an award certificate designed by Debbie Minné and an amount of money that was first determined by the royalties earned from the sales of You Make Me Possible: The Love Letters of Karina M. Szczurek and André Brink (Protea Book House, 2018). As Karina wrote in her Note on the publication, with André’s encouragement and support she was able to acknowledge the fact that she was a writer; he was an inspiration to many other writers and was always generous with his time and expertise in furthering the literary careers of others. The Philida Literary Award continues this legacy.