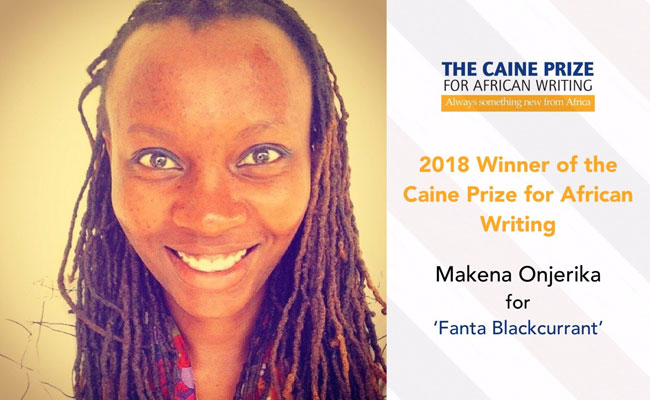 Kenyan writer Makena Onjerika has won the 2018 Caine Prize for African Writing – often described as Africa’s leading literary award, for her short story entitled “Fanta Blackcurrant”, published in Wasafiri (2017). The Chair of the Caine Prize judging panel, award winning Ethiopian-American novelist and writer, Dinaw Mengestu, announced Makena as the winner of the £10,000 prize at an award dinner on Monday, 2 July. The ceremony was held for the second time in Senate House, in partnership with SOAS and the Centre for African Studies.

Narrated in the first person plural, "Fanta Blackcurrant" follows Meri, a street child of Nairobi, who makes a living using her natural intelligence and charisma, but wants nothing more than "a big Fanta Blackcurrant for her to drink every day and it never finish". While it seems Meri's natural wit may enable her to escape the streets, days follow days and years follow years, and having turned to the sex trade, she finds herself pregnant. Her success stealing from Nairobi’s business women attracts the attention of local criminals, who beat her and leave her for dead. After a long recovery, Meri "crossed the river and then we do not know where she went".

Dinaw Mengestu praised the story in his remarks, saying “the winner of this year’s Caine Prize is as fierce as they come – a narrative forged but not defined by the streets of Nairobi, a story that stands as more than just witness. Makena Onjerika’s ‘Fanta Blackcurrant’ presides over a grammar and architecture of its own making, one that eschews any trace of sentimentality in favour of a narrative that is haunting in its humour, sorrow and intimacy”.

Makena is a graduate of the MFA Creative Writing programme at New York University, and has been published in Urban Confustions and Wasifiri. She lives in Nairobi, Kenya, and is currently working on a fantasy novel.
Makena was joined on the shortlist by:

The panel of judges was chaired by Dinaw Mengestu – a graduate of Georgetown University and of Columbia University’s MFA programme in fiction. In 2007 the National Book Foundation named him a “5 under 35” honouree, and in 2012 he was selected as a MacArthur Fellow. Dinaw has written four novels: The Beautiful Things that Heaven Bears (2007); Children of the Revolution (2007); How to Read the Air (2010); and All Our Names (2014).

Alongside Dinaw on the panel of judges are: Henrietta Rose-Innes, South African author and winner of the 2008 Caine Prize; Lola Shoneyin, award winning author and Director of the Ake Arts and Books Festival; and Ahmed Rajab, a Zanzibar-born international journalist, political analyst and essayist.

As in previous years, the winner of the Caine Prize will be given an opportunity to take up residence at Georgetown University at the Lannan Center for Poetics and Social Practice. The winner will also be invited to speak at the Library of Congress. The winner is invited to take part in the Open Book Festival in Cape Town, Storymoja in Nairobi and Ake Festival in Abeokuta, Nigeria.

Last year the Caine Prize was won by Sudanese writer Bushra al-Fadil for his short story “The Story of the Girl Whose Birds Flew Away” from The Book of Khartoum (Comma Press, 2016) – translated from Arabic by Max Schmookkler with support from Najila Osman Eltom.

The New Internationalist 2018 anthology, Redemption Song and Other Stories, is now published and it includes all of the shortlisted stories along with 12 other short stories written at the Caine Prize 2018 workshop in Rwanda. You can buy the anthology at https://newint.org/books/fiction/caine-prize-2018/. The anthology is also available from 11 African co-publishers who receive the print ready PDF free of charge.