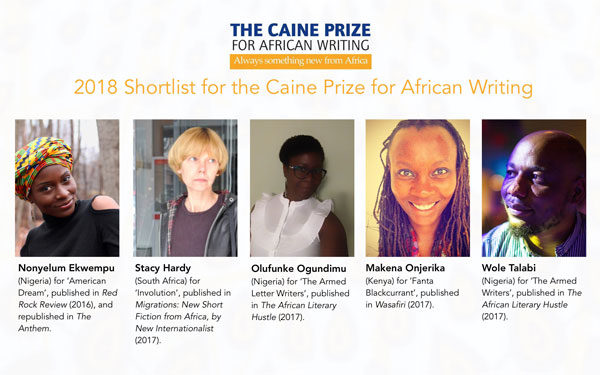 The shortlist for the 2018 Caine Prize for African Writing has been announced, showcasing a diversity of themes and a wealth of literary talent. The five-writer shortlist was unveiled by this year’s Chair of judges, award-winning Ethiopian-American author, Dinaw Mengestu.

Dinaw Mengestu, former Lannan Foundation Chair in Poetics at Georgetown University, said: “The best short stories have a subtle, almost magical quality to them. They can contain through the rigour of their imagination and the care of their prose more than just a glimpse into the complicated emotional, political, and social fabric of their characters’ lives. The stories submitted for this year’s Caine Prize contained worlds within them, and nothing was perhaps as remarkable as finding that in story after story, writers across the continent and in the diaspora had laid waste to the idea that certain narratives belonged in the margins.

“The politics and aesthetics of gender, sexuality, corruption and silence were a constant presence throughout many of the stories submitted, particularly those on our shortlist. These five remarkable narratives are proof that nowhere is the complexity and diversity of Africa and African lives more evident than in the stories we tell.”

The shortlisted writers for the 2018 Caine Prize are:

Biographies of each shortlisted author can be found on the Caine Prize website.

Joining Dinaw Mengestu on the 2018 judging panel are: Henrietta Rose-Innes, South African author and winner of the 2008 Caine Prize; Lola Shoneyin, award-winning author and Director of the Ake Arts and Books Festival; and Ahmed Rajab, a Zanzibar-born international journalist, political analyst and essayist.

The winner of the £10,000 prize will be announced at an award ceremony and dinner in the Beveridge Hall at Senate House, SOAS, on Monday 2 July 2018 – in partnership with the Centre for African Studies. Each shortlisted writer will also receive £500.

The shortlisted stories will be published in June in New Internationalist’s 2018 Caine Prize anthology, Redemption Song, and through co-publishers in 16 African countries who receive a print-ready PDF free of charge.