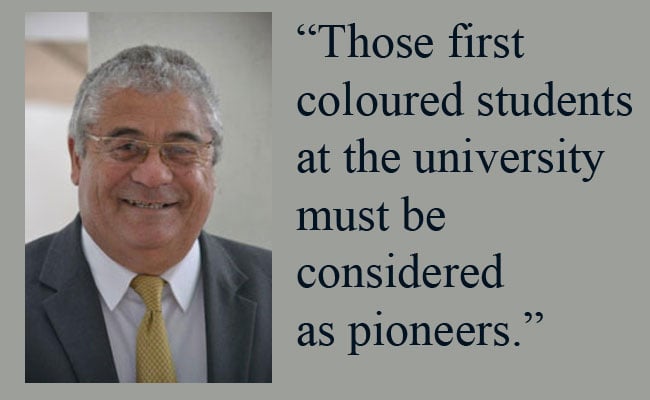 “Language has been a continuous barrier to access and success in higher education, both in the sense that African languages have not been developed as academic or scientific mediums of instruction and in so far as the majority of students entering higher education are not fully proficient in English and Afrikaans.”

Open Stellenbosch describes itself as an organisation committed to transforming the University of Stellenbosch and is a predominantly black student movement. Opposed to Afrikaans as a language of instruction and the slow pace of transformation, in their view, they have the support of black students and individual members of staff. They claim that management have failed them as they did in the past because of a lack political will to implement their much-lauded strategic, employment equity, quality development plans and a list of other documents and policies. The closure of the Centre for Inclusivity was a major mistake, as its aim was to facilitate institutional transformation at the campus. The Centre was disbanded shortly after the death of former rector and vice-chancellor Russel Botman.

To understand the problem at the University of Stellenbosch one should also take the history of the university into consideration, given the enrolment of Afrikaans-speaking coloured students at the campus for the first time in 1979. Before that, coloured students were barred from access to the University of Stellenbosch because of the apartheid laws on higher education. Initially these students had no access to the university residences and could not participate in any sport or cultural activities. They felt the brunt of discrimination and racism on and off campus.

All they had in common with their fellow white Maties was Afrikaans, their mother tongue. They had no platform at their disposal where they could air their concerns. Most of them came from poor backgrounds and were dependent on the goodwill of the coloured community in Idas Valley or Cloetesville and surrounding areas. They became known as student boarders. Some had to travel by train from the Cape Flats and were often not allowed into the lecture room when they were late due to the train delays.

Those first coloured students at the university must be considered as pioneers. Their presence at the university opened up possibilities for other disadvantaged students. The system did not do them any favours, but they soared above their circumstances. Many of them became successful.

The old ways and the old days also had humorous moments. Some of the so-called coloured students' surnames caused confusion. The Van der Merwes, Van Schalkwyks, Van Wyks and even Du Toits surprised many lecturers and white fellow students.

Also: remember that non-white students could study at Maties only if the specific course did not exist at the University of the Western Cape, like medicine or engineering. The door was not fully open. Second-class citizenship continued alongside second-class treatment on campus.

Their struggle then was not the language issue, but accommodation and access to finance in the form of bursaries. At that stage the door to the University of Stellenbosch was slightly ajar. They experienced difficulties unknown by their white fellow students.

That dismal situation still exists today, albeit on another level. Students still experience discrimination and racism. The university management are failing them because they fail to rise to the occasion. The impression is created that they are silencing and suppressing the conversation they need to be leading. We need cool heads as we engage in these discussions, which at times will be painful. Management need to enter into conversation with these aggrieved students. The Open Stellenbosch Collective should be seen as an opportunity to listen to them and act decisively on their demands and not through a #luister video or the media.

The university should not postpone this debate any longer. Students are being failed by the university system. The University of Stellenbosch should become the vehicle for change of tertiary education in South Africa and should embrace a multicultural and multilingual environment on campus.

The language issue is an important one. Not only does it affect learning and teaching, but it also has an influence on how grievances can be tabled. Afrikaans should be seen and accepted by non-Afrikaans students as a language spoken by the majority of people in the Western Cape. There are more Afrikaans-medium schools in the Western Cape than in the rest of the country combined. Surely this is a fact that cannot simply be ignored. Those students, the majority of whom are coloured/black Afrikaans mother-tongue speakers, have a right to be taught in the language of their choice – Afrikaans. The abandonment of Afrikaans as a medium of instruction at universities will have an effect on the entire Afrikaans community in South Africa.

Access to higher education has always been and will always be a thorny issue given the inequality of South African society in general and the battle between the haves and the have-nots as well as language and culture. There seems to be no lasting solution to this problem that is plaguing universities, and especially historically Afrikaans universities. Government was aware of this problem that would face us sooner rather than later, hence the Gerwel Commission in 2011.

Former President the late Nelson Mandela addressed this issue on the occasion of the acceptance of an honorary doctorate of the University of Stellenbosch on 26 October 1996 (the speech was originally delivered in Afrikaans):

The real issue is not the extermination of or the preservation of Afrikaans as an academic medium. Rather, the question is this: Amongst ourselves, how are we to negotiate a dispensation for the South African university system that meets the following three criteria? Firstly, that a milieu should be created and maintained for Afrikaans to continue growing as a language of scholarship and science. At the same time, that non-speakers of Afrikaans should not be linguistically deprived of access within the system. And, moreover, that the use and development of no single language medium should – either intentionally or unintentionally – be made the basis for the furtherance of racial, ethnic or narrowly cultural separation.

Open Stellenbosch seems not to be fully informed about the previous struggles at the university. The language issue should be addressed in a different way. There should be acknowledgement of students who were previously disadvantaged and now would be disadvantaged again if they have no access to learning in Afrikaans. These students can't lose their human rights a second time. According to Winston Churchill, "Jaw, jaw is better than War, war." It is in everybody's best interest to discuss all the matters as soon as possible.

I would urge Open Stellenbosch to read the Language Policy for Higher Education: Ministry of Education: November 1992. This policy was based on the recommendations of the Gerwel Commission which recognised the linguistic diversity of our country and aimed to build a common sense of nationhood.

The door is open and doesn’t need to be kicked down. Open Stellenbosch, please enter and engage. Management, luister asseblief.