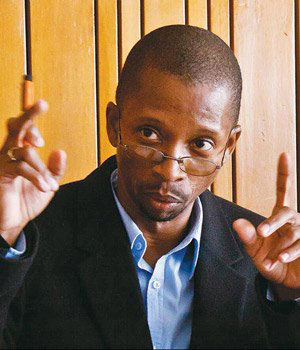 I must confess, the first time I arrived at Stellenbosch it looked like a strange place that I had seen in the movies. I left South Africa to study at Kampen Theological Seminary in the Netherlands, then it reminded me of the Stellenbosch set-up or architecture. I therefore reminded myself that Stellenbosch remains the symbol of imperialism and colonialism. In these past two years I met a group of black young ladies studying at Stellenbosch University and they told me that their medium of instruction was Afrikaans and not because it was optional but compulsory.

Of course, this was nothing new to hear, as the University of South Africa (Unisa), where I am working, and where I studied and am still studying, used Afrikaans together with English as a medium of instruction. I had the same experience when I was studying at the University of Pretoria. This is an injustice and a mockery on Africa. But the question and answer is: “Who is to blame for all this injustice? Actually, it’s our fault. Yes, it is black people’s fault all over the world. We give these whites control over us and space in the black territory.

I must confess, I have never been comfortable with this arrangement as I was even expected, as a lecturer, to send my English study material and examination question papers to an Afrikaans colleague for translation into Afrikaans. This arrangement meant that whites had an advantage to use either language, while blacks of whom none of the said languages was their mother tongue, had no option to use the African indigenous language.

When I asked why, I was told it was the policy of the University. Mind you, the minister of education was black and from the former liberation movement, the ANC. As a reminder: all ministers of education from 1994 to date have been black. By implication, all these black ministers of education have done nothing except maintain Afrikaans and English as dominant languages.

Karl Marx was correct: “The oppressed are allowed once every few years to decide which particular representatives of the oppressing class are to represent and repress them.”

For the most part the words imperialism and colonialism are used to mean the same thing, although they are sometimes differentiated. Irrespective, the agenda is to pursue and protect the white interest. CK Raju in his paper titled “Ending academic imperialism: a beginning” exposes that “Western education has been promoted on the grounds that it would help to ‘catch up with the West’ in science and technology and thus obtain parity with the West in hard power. This belief makes the non-West imitate the West.” The question would be where are our black professors in this whole scenario?

Lenin was correct to state, “Whenever the cause of the people is entrusted to professors, it is lost.” Muzi Kuzwayo is correct: “We are so obsessed with being accepted and loved by white people that we have stopped thinking.”

Historically, and even today, in the midst of black professors the medium of instruction to “catch up with the West” in South Africa has been Afrikaans and English. This is called linguistic imperialism, the imposition of one language on speakers of other languages. In our case, white languages (Afrikaans, English, etc) have been utilised to colonise us through language for the following two reasons: first, Franz Fanon exposes that “(t)o speak a language is to take on a world, a culture”. Secondly, we must be mindful that “language disguises thought” (Ludwig Wittgenstein). It must be clear, then, that language is more than just a means of communication; it influences our culture and even our thought processes.

Cultural terminologies reflect that culture’s interests and concerns. The interest is to dominate through the political, economic or cultural life of another. Usually, this domination happens through a process called integration. Integration is that breaking down of national communities, languages, etc, and their assimilation. Usually this integration “requires a material and class basis: for an oppressed nationality to be integrated, its class structure has to integrate with the ‘host’ class structure” (Klaas, V, Imperialism and the integration of oppressed nations: some comments).

In all of the cases of higher and basic education, blacks are forced by law to integrate into Afrikaans and/or English. And this integration is usually called multiculturalism. Multiracialism was aimed at being a concept or ideology that promotes a society composed of various races, while accepting and respecting different cultural, linguistic, etc backgrounds, but we know that in Stellenbosch, or any institution of higher learning, it will mean being integrated into Afrikaans and/or English. The implication for blacks to be in a “multiracial” context would mean: “It’s just like you’ve got some coffee that’s too black, which means it’s too strong. What do you do? You integrate it with cream, you make it weak. But if you pour too much cream in it, you won’t even know you ever had had coffee. It used to be strong, it becomes weak. It used to wake you up, now it puts you to sleep” (Malcolm X).

If you ask me what should happen about Afrikaans and English as mediums of instruction or about the policy of language in higher and basic education I would say, let us create a radical Act and Policy of Language for South Africa.  In that policy, the indigenous languages become compulsory. And on top of that each academic institution determines one or two indigenous languages as a medium of instruction. Decolonisation and de-imperialism without linguistic tools are questionable, problematic and tricky.

In short, Afrikaans and English are the languages of the imperial and the coloniser, therefore I concur with CK Raju that “The point about academic imperialism is not just to talk about it, but to end it. Talking about it is useful only in so far as it helps to understand the key causes and remedies.” In short, I would propose that Afrikaans and English as the languages of the oppressor and the conqueror must be ended. Actually this is a light note; what I am trying to say is that they must be erased even in the Constitution of the Republic of South Africa.

I therefore recommend the following general principles as a way forward: