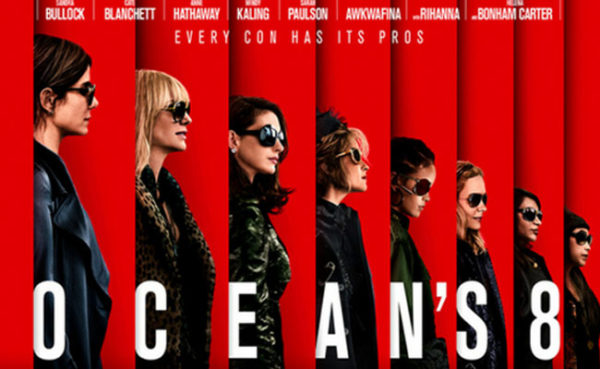 Upon her release from prison, Debbie, the estranged sister of legendary con man Danny Ocean, puts together a team of unstoppable crooks to pull off the heist of the century. Their goal is New York City's annual Met Gala, and a necklace worth in excess of 150 million dollars.

A great cast rarely guarantees a great film (and a lot has been made of this film’s cast). Yet, I was hopeful that the ginormous ensemble of highly talented women in Ocean’s 8 would prove to be a slick, exhilarating and entertaining combination. It was all in vain.

The women have a nice enough chemistry, and some of the banter is lovely, but the film never goes beyond that. The characters never fully bloom. I was waiting for Helena Bonham Carter to go all Sweeney Todd, for Cate Blanchett quietly to eviscerate someone with a look, or for Sarah Paulson to slip into the batshit craziness of Sally, or any of her varied American horror story characters. It never happens. You get a glimpse here and there of what could have been, of what Mindy Kaling or Awkwafina could have brought to the production, but the film ultimately plays it too safe.

The heist is not much more exciting than the characters. Robbing the Met Gala, or rather one attendee at the Met Gala, is not all that exciting. How they pull it off hardly raises your pulse. This is the most unoriginal instalment in the franchise.

At least the marketing campaign has led to a plethora of hilarious, and sometimes riotous, interviews with the all-women cast. They certainly are way more entertaining than the film. Perhaps they should have left the scriptwriting to the cast. Imagine that.