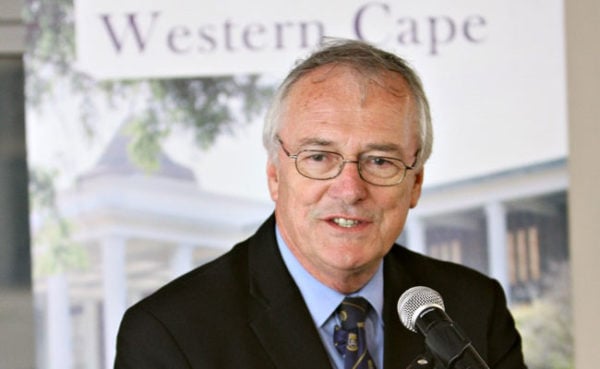 Stanley GM Ridge, or Stan, as we all knew him, passed away too soon, on Tuesday 30 January. He was not only a man of letters in the widest understanding of the term, but a contemporary equivalent of the Renaissance man in the sense of an Uomo Universale, one who has a plethora of talents and who embraces all aspects of knowledge – someone who can put not only their mind, but also their hand, to almost anything. As was to be expected from someone with such extensive talents, Stan was a man of astounding energy, and though he had been battling cancer for some time, it is still hard to believe that his forceful presence and exuberant intellect are no longer palpably here with us.

Those who knew him will recall his prodigious knowledge of topics ranging from the scientific names for our local flora and fauna, to a familiarity with several languages of this land, including Zulu and Afrikaans. As a lecturer and teacher, his passion for the topic, plus his apparently bottomless reservoir of knowledge on the subject at hand, left a lasting impression on those who were taught by him, as well as those who worked with him. His scholarly standing, both locally and internationally, is evident in his more than fifty academic publications, covering a wide area of research interests, ranging from language and education policy to regional and period literary studies, as well as translation studies and publishing history across languages. In addition, he held many leadership positions, including two terms as dean of arts, then acting vice-rector (academic), and finally pro-vice-chancellor of UWC. He also served as chair of the council of the National English Literary Museum in Grahamstown, and was past president of the English Academy of Southern Africa, as well as trustee of the Babette Taute Trust, which has enabled many young scholars from UWC and elsewhere to further their academic careers.

Stan’s nearly 40 year long involvement with UWC coincided with a period of intense challenge and transition on a number of fronts, and his forthright leadership was undoubtedly a major stabilising influence during often turbulent times, and UWC has much to thank Stan for. There were also, nevertheless, some moments during student protests of the 1980s which, looked at in the context of the recent #FeesMustFall protests, seem oddly benign, if not incongruous, and Stan would remind us of this from time to time. One such memorable incident involved a group of students marching to the main gate (or “Hek toe!”) to confront riot police, chanting, “An injury to one is an injury to all.” But, when one of the students spotted a group of us from the English department sheltering ineffectually behind a scrubby bush to escape tear gas, he interrupted his chant and ran back to us to ask, “Is the Chaucer worksheet ready yet?”

A couple of things stand out which put some flesh onto the bare bones of Stan’s many accomplishments. To this day, I can still vividly recall, as a student, his tour de force reading of the passage from Milton’s Paradise lost describing Satan’s expulsion from heaven. Stan always had a commanding stage presence, very useful for this purpose, which was to demonstrate the skill of Milton’s use of the English language to dramatise the event, so that one felt transported into the moment itself. Stan’s impressively sonorous cadences as he reached the end of Satan’s plummeting journey, evoked by the run-on lines of the final sentence, have become an iconic memory for many of us who experienced the tongue-in-cheek dramatic relish with which he delivered these lines in one long, impressively single breath!

Him the Almighty Power
Hurld headlong flaming from th’ Ethereal Skie
With hideous ruine and combustion down
To bottomless perdition, there to dwell
In Adamantine Chains and penal Fire
Who durst defie th’ Omnipotent to Arms.

Secondly, despite being deeply involved in high-level policy making matters, as member of the university executive, Stan still found time to teach and to supervise, and, to his credit, to teach not only at postgraduate level, but also first year students. My fondest memories of his time as a colleague at UWC stem from the period about ten years ago where he co-taught in the interdisciplinary first year humanities course, which drew on the input of colleagues from English, history, philosophy, Arabic, and religion and theology. Clearly, such a course was ideally suited to a polymath like Stan, and his input during the planning stages for the course involved intensely stimulating intellectual exchanges, reminding those of us involved in the course why we had originally chosen to do what we do as academics. I recall his stimulating interactive lectures on the origins of writing, involving pictograms, ideograms and the like, during the course of which he included some exercises where students had to decipher a sentence in the Greek alphabet, only to discover, to their delight, that the words read, “I am learning fast.” At the same time, this lecture included a lively discussion on orality, where Stan both impressed and confounded students by fluently code-switching between English, Afrikaans, Zulu and Xhosa. As one can imagine, these lectures introduced students to worlds of knowledge not available in other courses.

As mentioned earlier, Stan’s designation as Uomo Universale is borne out in the wide scope of his publishing and research interests. At the same time, the combination of erudite administrator, visionary policy maker, excellent scholar and passionate teacher is rare, since one usually finds a leaning towards one at the expense of the others. This, coupled with the unstinting generosity of spirit characterising Stan’s interactions with all of us, colleagues and students alike, makes it hard to quantify his commitment to the study and celebration of our literatures and languages. It is thus fitting that the English Academy of Southern Africa presented him with the Fellowship Award in November of last year in recognition of his deep and many-faceted contribution. I feel I speak for colleagues, students and friends alike in saying simply: “Stan, you have broadened our knowledge horizons by example, your intellectual energy has been infectious and you have changed and shaped those you have taught and worked with. Rest in peace, dear friend.”

(Extracts taken from the citation delivered on 22 November 2017 for the Fellowship Award presented to him by the English Academy.)