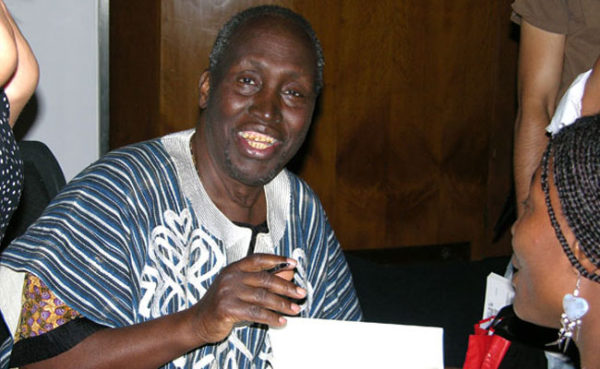 Before Ngũgĩ wa Thiong’o entered, the hall was filled with the crowd singing struggle songs, stamping feet, ululating and clapping hands, and the anticipation built up. The crowd then sang what is known among the Fallist movement as the “decolonised national anthem”, and Ngũgĩ wa Thiong’o was greeted with great respect.

The audience had settled down for wa Thiong’o to start his lecture, when a young female student stood up and interrupted the lecture with a message, in which she asked wa Thiong’o to set the tone and ask the oppressor to leave. She asked him how the students could sit in the Baxter, which is part of the University of Cape Town, after everything that had happened to marginalised groups of students, especially poor black students. She wanted to know how the lecture could continue in the presence of the oppressor. For this young student, the oppressor needed to leave so that the oppressed could listen to the lecture in peace. Professor Xolela Mangcu addressed the audience, and said it would be disrespectful if wa Thiong’o, who had come all this way, could not continue with his prepared lecture.

Student movements, decolonisation of the mind, black consciousness, Steve Biko’s role in the ’60s and what the students had gone through over the past few years during protest action on campuses, were mentioned before wa Thiong’o started his lecture.

He mentioned how, a few years ago on a visit to Cape Town, he had seen a statue of Cecil John Rhodes, and it had seemed weird to him that Rhodes was “standing at the gate” of the university. The removal of the statue, and how it links with decolonisation, is what is at the heart of the Rhodes Must Fall movement.

Ngũgĩ wa Thiong’o spoke on the importance of mother tongue education, and also why it is so important to learn other African languages. He said, "If you know all the languages of the world, but not your mother tongue, that is enslavement. Knowing your mother tongue, and all other languages too, is empowerment." We can thus empower ourselves by being strong in our mother tongue, regardless of what other speakers feel toward our language. In South Africa, we see how languages are treated unequally because of the history of the people speaking those specific languages. The challenge comes in when we need to distinguish between people, cultures and what comes out of the people’s mouths. Parents are starting to send their children to English schools, because the topic of mother tongue education has not reached everyone yet, and wa Thiong’o says we must reverse the trend of African parents not wanting to teach their children in their mother tongue.

This, however, does not discard the use of English in schools or universities; however, people express themselves best in their mother tongue, and, therefore, we must make it our mission to educate everyone on the importance thereof.

Africa is rich in minerals, and wa Thiong’o pointed out how European countries rely on Africa for their riches. Africa needs more recognition, and Africans need to claim ownership of what is happening on their continent.

Social media was buzzing after Ngũgĩ wa Thiong’o’s lectures at Wits, UCT and Fort Hare. Here are a few tweets from the lectures:

By saying this, wa Thiong’o had reflected on how language was used as an instrument of oppression, but also how language needs to fix the problems of the past.

KokeletsoLefutswe‏ @Keletsolefutswe: "You laugh when your own speaks broken English but clap when a white speaks broken Zulu" #ngugipubliclecture

Busisiwe Seabe‏ @Ms_BSeabe: “Ngugi says the mistake made by African public policy-makers is to pamper European languages and pauperise our own” #ngugipubliclecture

NIHSS‏ @iNIHSS: “Prof. Ngũgĩ wa Thiong'o says Africa must claim ownership of the continent, as well as ownership of its resources.” #ngugipubliclecture

My question at the end of the evening was: Should wa Thiong’o have asked the oppressor to leave the building after the female student had stood up and spoken on the oppressive behaviour toward black students...?

I think that whenever we are gathered in a space that we find oppressive, that is the ideal opportunity to educate the oppressor, and make him aware of his oppressive behaviour. It is also an ideal opportunity to act in the role that history has prescribed to us, because, from our past, we can move forward to the future and avoid the mistakes that crippled us.

The importance of mother tongue education and learning other languages will also open us up to ourselves and to the world. The misconception that “proper” English prepares us for international success, and will help us be world-class citizens, needs to be broken down in order for us to take ownership of our own language and our position in other languages.