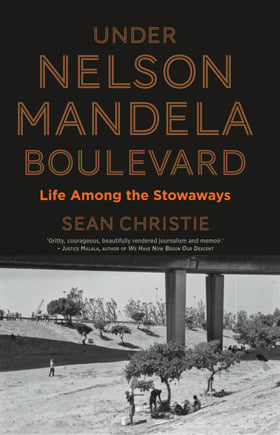 Under Nelson Mandela Boulevard – life among the stowaways is an insightful, engaging and important book written by Zimbabwean-born Sean Christie. In it, he recounts his experiences with a small group of Tanzanians who come and go as stowaways and live rough on Cape Town’s foreshore.

The work that later resulted in the book saw the author awarded the special Taco Kuiper Award for his journalism in 2015, a year after he was a category winner at the CNN MultiChoice African Journalist of the Year Awards. He also won the Recht Malan Prize at the Media24 Book Awards in 2017.

He himself describes the book as “part history, part ethnography, and part biography, with a measure of memoir mixed in”. Some of it has the feel of Ivan Vladislavić’s Portrait with keys about Johannesburg.

But, it is also about a community that hides in plain sight and is notoriously suspicious of strangers. After he was introduced by photographer David Southwood, Christie developed a close relationship with one Tanzanian in particular – the charismatic Adam Bashili. The friendship meant Christie (and the reader) would be given a privileged glimpse into Sea Power – a traveller’s code broadly shared by similar communities of “Beachboys” in port cities around the world.

The book’s simplicity is its strength. It couldn’t be more topical on global themes of human migration, geopolitics and socio-economic upheaval, but Christie only barely mentions them. This is the story of individuals, including himself, whose lives spill messily across the lines we are biologically programmed to draw – often to our own detriment.

Life in the shadows of the bridges and skyscrapers is as hard as one can imagine. Drugs, crime and disease are common currency. “And yet, I sit around the fire at The Kitchen [one of the gathering places], fascinated by their tales and impressed by their ingenuity, their forbearance,” he writes. “I don’t see their crimes stacked up behind them ...

Christie skilfully weaves historical and social context into the retelling of day-to-day events, from his early encounters with the Beachboys through to his introduction to the slums of Dar es Salaam. His own participation is inevitable. Christie is no longer a mere narrator. His experiences lead to occasional reflections on his own life’s journey.

The answers to the questions of how the Beachboys arrived here and what motivates them are answered, but these are shifting sands. At least halfway through, the reader becomes aware that the featured characters one now seeks along the byways have moved on; that the marching city was somehow pipped at the post by Christie’s immortalisation of its ghosts.

Under Nelson Mandela Boulevard – life among the stowaways makes a valuable contribution to the African and South African narrative. It is more than just a journey into someone else’s view of the world; it is a journey into our own as well. You’ll be telling people about it long after you’ve closed the final chapter.