Love of the stranger in Leviticus 19: different views of strangers in the Holiness Legislation

The article engages with the figure of the stranger (גֵּר) in the book of Leviticus in general and Leviticus 19:33–34 in particular. References to the גֵּר are found mostly in what is traditionally known as the Holiness Legislation, which is understood as a post-Priestly text which was created as a result of an inner-biblical discussion. The Holiness Legislation came into being in the Persian period.

The article starts by presenting an overview of the different occurrences of the term גֵּר in Leviticus 16–26. It attempts to show which laws are applied to the גֵּרִים, what protection they are given and how they are to be treated in general. Two cases of an earlier view of the גֵּר in 19:10 and 23:22 are also pointed out, since they express a similar view of the גֵּר as the older law codes. Especially important are examples where obedience to the same laws is expected of both the גֵּרִים and the Israelites, including Leviticus 16:29; 17;25; 18:26; 19:34; 24:16, 22. The article then presents an overview of the current state of the debate on the position of the גֵּר. The first issue addressed is the old argument going back to Bertholet (1896), and still very much prevalent in current scholarship, that the גֵּר was a proselyte, in other words, somebody who came from the outside and who was assimilated into the Israelite community, including the cult. The cases mentioned above of where the same thing is expected of both the אֶזְרָח and the גֵּר are good examples of texts used in the proselyte argument.

The article then presents the contribution by Milgrom (1982, 2000) as a critique of the proselyte argument. For Milgrom the reason the גֵּרִים were included in some laws was not really for the benefit of the גֵּרִים themselves, but actually to protect the relationship between the land, the addressees and YHWH. The fear was that the גֵּרִים could contaminate the land by not following certain prohibitive commandments and thus pose a threat to the relationship between Israel and the land. Although Milgrom’s argument is generally persuasive and clearly undermines the earlier arguments about proselytes, it still leaves some things unexplained. Milgrom does not explain why the sojourner (תּוֹשָׁב) is not included in the prohibitive commandments. Furthermore it does not explain the command to love the גֵּר “as yourself” (כָּמֹ֔וךָ) in Leviticus 19:33–34. How could loving the גֵּר protect the land? Christophe Nihan provides a partial answer to the first unanswered question.

The discussion of Leviticus 19:33–34 addresses issues such as the meaning of love (אהב) and the problem of the structure of Leviticus 19. In terms of the understanding of אהב the insights of Hieke (2014b) are used to argue that the term does not refer to an emotion, but more to an inner attitude towards fellow human beings which expresses itself through certain deeds. The concept is also discussed in terms of its broader use in the Ancient Near East to express “loyalty”. With regard to the structure of the chapter, the article draws on an earlier insight from Nihan (2007), based on the views of Otto (1999), that the chapter consists of two parallel parts. In this structure both verses 11–18 and 26–36 are smaller collections of laws with the central theme of loyalty to fellow Israelites (vv. 11–18) and loyalty to YHWH and the fellow Israelite (vv. 26–36). Leviticus 19 is also understood as a case of inner-biblical exegesis where earlier legal codes (especially the Decalogue) are reinterpreted in the light of the Holiness Legislation’s quest for holiness (Hieke 2014b).

With regard to the command to love the גֵּר in verses 33–34, the earlier texts used in this process of inner-biblical exegesis are Exodus 22:20-21 and Deuteronomy 10:18-19. All three texts make use of the motivational clause that “[Y]ou were strangers in the land of Egypt.” When Leviticus 19:33–34 is compared with Exodus 22:20–21 it is clear that the former goes much further than the latter. In Exodus 22 the issue is simply about not abusing the גֵּר, but in Leviticus 19 love/loyalty is expected. When Leviticus 19:33–34 is compared with Deuteronomy 10:18–19, other differences become apparent. Deuteronomy 10 makes use of imitatio dei and shows that God himself takes care of the strangers and therefore the addressees should love them. Yet the main difference with Leviticus 19:34 remains the fact that the latter adds “like yourself” (כָּמֹ֔וךָ). When read as a parallel text to 19:18, then it is clear that the authors of chapter 19 do not only go well beyond texts such as Exodus 22:20-21 and Deuteronomy 10:18–19, but also go well beyond the other cases of the גֵּרִים in the Holiness Legislation where they are supposed to obey the prohibitive commandments.

The article concludes by showing that there are at least three different views of the גֵּרִים which developed out of one another. In the older view (19:10 and 23:22) the גֵּר is a vulnerable person who needs charity, a similar view to the one found in the older law codes. The second view of the גֵּר is the one described by Milgrom and Nihan as one who has to obey the prohibitive commandments and who, according to Nihan, reached this position through growing economic independence. But then the article argues that Leviticus 19:33–34 goes beyond even this second position. It asks of the addressees to show the same loyalty to strangers as they would to fellow Israelites. This is still not a case of inclusion or of something like proselytes, but it clearly is a step in that direction.

The article concludes by asking which of the ancient views of the גֵּר could be regarded as laudable and which ones as disappointing when judged from a modern-day perspective informed by the idea of human rights. The author finds the pragmatism of the ancient authors impressive. There is no attempt to get rid of the גֵּר, but the texts simply try to cope with the reality of their presence. The fact that the גֵּרִים were not proselytes, but were still offered some protection is also laudable. The most disappointing aspect of the treatment of the גֵּרִים is the fact that they gained their elevated status by means of economic upliftment. In other words, the “free market” liberated them, not YHWH. Still, the fact that Leviticus 19:33–34 goes beyond this view of the גֵּר and takes a step closer to treating the גֵּר and the Israelites as equals is to be applauded.

While it is said in Lev 19:33–34 that the גֵּר must not be “oppressed” by Israelites and must be “loved” like a fellow citizen (Lev 19:33–34), the תּוֹשָׁב, on the other hand, may legitimately be forced to sell his children as debt-slaves if his economic situation requires it.

Nonetheless, because the gēr resides in the land alongside the Israelites, and is considered in principle as a free person, he is also subject to a series of requirements at the level of H’s sacral legislation. These requirements are united by the concern to prevent the possibility that the gēr, like the Israelite, may provoke the wrath of the patron deity either by profaning the sanctuary or by polluting the land. [skuinsgedruk in oorspronklike]

All in all, therefore, this survey of the passages where the גֵּר is included in H’s sacral laws confirms the theory according to which the predominant concern in these passages is that the גֵּר might either profane the sanctuary or pollute the land. 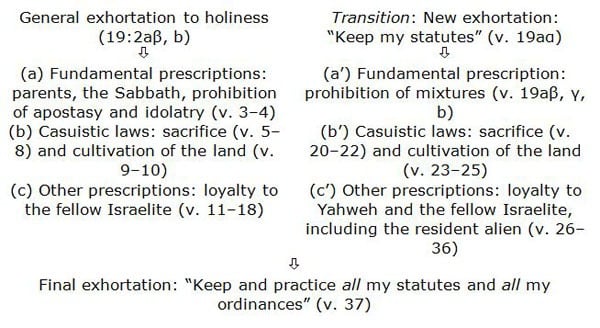 In this respect, Lev 19 stands as a remarkable case of inner-biblical legal exegesis: that is, it takes up several earlier laws regarded as exemplary in order to build a compendium of sorts illustrating the requirements of a holy life. [skuinsgedruk in oorspronklike]

The focus, in H, is no longer on the enemy specifically; rather, this issue has been transformed into a rule for interpersonal conflicts in general, which offers a fitting conclusion to the entire section formed by v. 11–18.

The opening prohibition in v. 33 (לֹ֥א תֹונ֖וּ אֹתֹֽו, “you shall not exploit him”) takes up Ex 22:20; the commandment to love the resident alien is already found in Deut 10:19 (albeit without the specification כָּמֹ֔וךָ), where it is also motivated by reference to Israel’s sojourn in Egypt, as in v. 34a. H’s innovation consists of the motivation given for this commandment in v. 34aα identifying the resident alien (גֵּר) with the native (אֶזְרָח). This considerable innovation justifies in turn the addition of the phrase כָּמֹ֔וךָ over D: because the resident alien is like a (full) citizen, he legitimately deserves the same loyalty as “yourself”, i.e., as a full-born Israelite.

A closer examination of Exod. 22.20–26 (ET 21–27) reveals an appeal to the empathic capacity of the recipients, or, if some of these rules are taken as reflections of customary law, they suggest an empathic explanation of and motivation for such practices.

Achenbach, R., R. Albertz en J. Wöhrle (reds.). 2011. The foreigner and the law: Perspectives from the Hebrew Bible and the Ancient Near East. Wiesbaden: Harrassowitz. (BZAR 16.)

Joosten, J. 1996. People and land in the Holiness Code. An exegetical study of the ideational framework of the law in Leviticus 17–26. Leiden, New York, Keulen: Brill. (VTS 67.)

Knohl, I. 1995. The sanctuary of silence: The Priestly Torah and the Holiness School. Minneapolis: Fortress.

Nihan, C. 2007. From priestly Torah to Pentateuch: A study in the composition of the book of Leviticus. Tübingen: Mohr Siebeck. (FAT II/25.)

Sparks, K.L. 1998. Ethnicity and identity in ancient Israel. Prolegomena to the study of ethnic sentiments and their expression in the Hebrew Bible. Winona Lake: Eisenbrauns.