Karin Schimke is the winner of the Ingrid Jonker prize for her debut collection of poetry, Bare & Breaking. She spoke to Carine Janse van Rensburg about her writing.

What started you writing poetry? Is poetry is a calling. How do you know when something is a calling?

The first poem I wrote was when my best friend immigrated to Canada with her family. I was about ten. My friend was older and had a boyfriend. I wrote the poem to him. Not for him. It was about how he and I were suddenly connected because we were so sad about Pavlina leaving. One particularly revolting line remains embarrassingly embedded in my brain. I'm very glad I never showed anyone.

But perhaps this anecdote is demonstrative of my impulse for poetry. Huge, almost unmanageable feelings make more sense to me once I've worded them. But "feeling" isn't the reason I write. "Understanding" is probably a closer answer to "why".

I'm not sure about the word "calling" and whether I am "called". Or whether poetry is the thing that calls. If anything calls me at all, it's ink and paper, because ink and paper give the inconceivable, the incomprehensible, the unimaginable, the unbearable and the fleeting three dimensions in the world so that I can examine it better.

Poetry is a tactile thing before it is an intellectual thing or a feeling thing. And I hesitate to call it a "calling" because it imbues the whole endeavour with a sheen of the magical and other-worldly. I am too much in the world for that (to horribly misquote Rainer Maria Rilke).

And yes, I write with a pen on paper when I write poetry. I like how poetry feels in my hands. 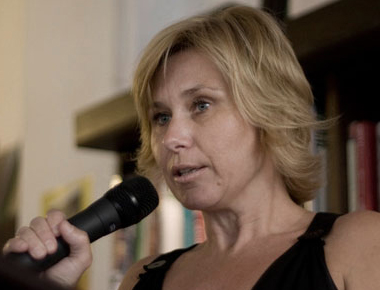 Did the Ingrid Jonker Prize come as a surprise to you? Did you have any hopes or aspirations towards becoming an award-winning poet? Do you think winning the Ingrid Jonker prize will change your life in some ways?

One of my life narratives has always been "I'm not a prize winner". I'm a plodder. A workhorse. The first time I got any sense of how exciting it could be to win a prize was when I was a finalist in the South African Literary Awards for poetry last year. I didn't think I had any chance of winning because the other finalist was Petra Müller. She did win it, and I was glad because she is so much more experienced than I am and her book was better than mine. But for the first time I got excited about how it might feel to be recognised and rewarded out in the world.

Having been a journalist all my life, I am quite unimpressed by power, prizes and money. Kindness and humour, grace and authenticity – those are the things that make me value people.

I've never felt like getting a prize was important though I understand how very important it is out in the world. But to make as though this prize means little to me would be disingenuous. I was on a high for 24 hours after I found out. To have one's name linked to Ingrid Jonker's poetic legacy in this way is – well. It's just. It's. (It's speechless-making, apparently. I can't find the right word.)

Also, it came at a really good time for long and boring reasons that have to do with work and career and life decisions, so it has been a strange combination of encouragement, injunction and reward.

What does it mean to you to be a poet?

Does it take bravery to write about personal “bares and breakings”?

People often say "You're so brave." I don't feel brave.

Readers forget that while the impetus for a poem lies in the personal and intimate, a poem is no objective way to measure fact and every poem I write is not necessarily about my own direct experience, though of course much of it is.

One appropriates, one adopts, one advances. One reveals both more and less than the reader thinks. Poetry "lies like the truth". The truth is in the frisson between the words on the page and what they evoke in the reader – not in literal meaning.

I don't think I need to feel brave because between the spark and the end poem lies a piece of work. The poem has become its own new thing, often almost entirely apart from me. It's like relationship between a piano and hands: a third thing is created – music – which is neither piano, nor hands, but is entirely dependent on them, and comes from them.

People speak about bravery very often when it comes to writing, particularly writing poetry or columns, which I do a lot of too. But I never think of bravery when I am writing. I never have to steel myself. When I’m writing I’m thinking about difficult things and how to make them easier for myself by giving them a shape in the world.

Do you have an ideal reader in mind when you write? And, if so, who is this reader?

With all the writing I do I always have a reader in mind, but not with poetry. I really had to think about this question and then realised that if I had to find one or two words to describe my ideal reader they would probably lie in the cheesy realm of "kind" and "empathetic". If you're a nasty type, I'm sure you'd have lots of rude things to think about me after reading Bare & Breaking, but then you'd also be missing the point altogether.

Do you experience so-called “writer’s block” from time to time? Who/what is your muse for writing?

Yes, I do sometimes stop writing poetry, but it’s not a block, it’s an avoidance of some sort. As for muses, I always pick up poems on long drives, so maybe the road's my muse.

And, most unoriginally, since many writers feel this: being outside and in nature - walking where the sky is big and there's an edge of wildness, with your muscles pushing and your shoes crunching and birds fussing – makes my chest feel open and my voice less constricted. And I love floating in water. And running. And dancing. There really is something about the open air and a sense of the muscles under my skin that makes the poetry work.

My partner's poetry and our conversations also often spur me to poetry – or a poetic way of thinking. It feels like a form of play; we toss words and thoughts across the net of our different selves. I'm going to stop there, because I'm going to start sounding mawkish and sentimental, when I don't mean it like that at all. What I mean is that it is a rare and exciting pleasure to be in a close relationship with someone who understands the impetus to make shapes from the abstract, or make abstract what is concrete.

What about writers who have influenced you? Who are your favourite poets? Writers? Books? May I presume that Sheila Cussons is one of them? You use an extract from one her poems (“Ses op ’n tema”, Die swart kombuis) as a sort of motto, or leitmotiv for Bare and Breaking.

I like Sheila Cussons very, very much, but she’s not one I would single out. It’s always difficult to narrow your focus down to a few writers when you read a lot, but I suppose my list of “favourites” are thus: When I read Otters in Bronslaai (Antjie Krog) at university lights went on in dark places: you’re allowed to write like this? About the wild stuff? About the ordinary stuff? You can make beauty from the prosaic? Wowzer. So that was a collection that stands out.

I always return to Sylvia Plath, mostly for the odd and fabulous words I find there. Like “Mud-sump, happy sty face.” I love that line for its oddness, percussion and simplicity. (It’s from "The Beast"). I read "The Lovesong of J Alfred Prufrock" aloud at least once a year and I read "Snake" probably three or four times a year.

Billy Collins for his humour. Sharon Olds for the shape of her poems. I’ll have to stop now. One can get carried away.

Do you “design” your poems to be read aloud? Do you think it is an essential ingredient of a good poem?

I don’t think a poem can work on the page if, when read aloud, the tongue lolls around and the words trip themselves up. How it sounds on the ear and moves in the mouth is integral to the poem’s success. Now and again I write poems which I know work better performed than they do on the page. But I write mostly for the page, with the assumption that at some point a poem might be heard. Even if it’s never heard, the poem must sing itself well.

Do you follow a strict writing schedule or just write when the spirit hits you?

One day when I grow up I would like to be the sort of poet who sits down 5am religiously to write a poem or several, simply because I’d like to see myself improve at the craft and practise is how that’s done. But my relationship to writing poetry is more chaotic than that.

What about rewriting? How long does a poem stay in draft-form? Are you ever completely satisfied with the final product or do you go back to your poems after they had been published and think there are still some things that you would like to change?

I like things to be right and good, but perfect poetry doesn’t exist. I have a newspaper journalist’s attitude to almost everything I write: I did it the best I could at the time and then I had to let it go.

I do tinker, but not obsessively or to the point of paralysis. Too many writers hobble themselves that way.