Title: Letters to My Children 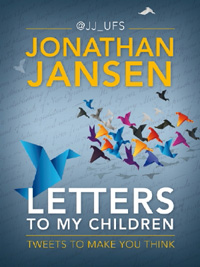 Click here to buy Letters to My Children at Kalahari.com.

Professor Jonathan Jansen, Vice-Chancellor of the University of the Free State, has written a new book, Letters to my children, which was recently published. The book contains thoughts posted by Jansen on Twitter as "letters" to his children and/or students. Henry Cloete asked him a few questions about his book.

In letter #4 you say, "Never, ever become a politician; rather choose public service." Yet you make several statements in the letters that can be construed or interpreted as political – for example, one of the letters reads: "Always remember that no single political party or movement or ethnic group achieved freedom for your country." Would you say the book contains not only life lessons for your children/students, but also statements that politicians should consider? If so, are there specific politicians you feel should learn to follow these pieces of advice? Who are they?

All my letters actually contain political commentary in so far as politics has to do with the exercise of power or authority. All our actions are political, too, in that they involve choices or preferences based on values about the good life. It is sad that in our country politics takes on only negative meanings and is referenced only in relation to political parties. It is in relation to the latter – organised politics – that I hope my children do not become part of the parade of power that overwhelms us daily and realise that there are other and better ways of serving, hence the tongue-in-cheek commentary on party politics being about something other than service. But no, my criticism is levelled at organised politics in general, but of course the ruling party is the one in power, so much of my commentary falls on them.

Letter #10 reads: "I only have one assignment for you: ignore those four race boxes on forms and write the word HUMAN." In your experience, are young people, or South Africans in general, ready to distance themselves from what makes them either ashamed or proud of their skin colour, especially in a society like ours, where race is constantly brought up?

Young people will follow the categories given to them unless they hear and feel otherwise. Slowly they understand that in a normal society where interactions, socially and educationally, are no longer regulated by law, these historical categories are a joke. But political youth often see advantage in these categories which can be mobilised to secure resources or to protest the lack of access to resources based on categories. Our task as teachers and parents and leaders is to build solidarity across these apartheid categories and give young people new identities (such as ecological and internationalist ones) around which to secure meaning.

"You are not coloured, we all are – as you can expect after 350 years of sleeping together," reads letter #14. Furthermore, letter #127 reads: "The chance that you have black/white blood in your veins, is more than 90 percent." Do statements like these typically bring you closer to or push you further away from your followers, and why?

I find a quiet acquiescence to these kinds of statements, from across the old colour lines. People intuitively know this is true, and since racial purity does not matter to this generation of youth, it is non-controversial at least to them. I have no doubt that some omies and tannies squirm when they read this, but I do not get negative feedback on this line of writing.

You also encourage your followers not to accept a job if they suspect they got the job only because of their skin colour. This elicited some vehement reaction. How does the attitude of those who grew up after 1994 differ in this regard from that of those who are older?

Of course it depends on whether you're white or black, in terms of experiences associated with colour discrimination. Black folk react vehemently, especially those who believe, like the white nationalists once did, that colour should be wielded to your advantage if you're in power. We never seem to learn. White folk like this because they have short memories and respond to perceptions of being left out in the current political economy because they are white. Then and now I stand by the position that merit should matter, not pigmentation. We have caused huge damage already.

In letter #3 you say, "Condoms tear", and in letter #35 you say, "Sex is for marriage." This seems to be indicative of a more 'conservative' approach from you regarding this subject, while you are otherwise regarded as challenging and free-thinking. Why do you take this stance and do your followers mostly agree with you or differ from you concerning these issues?

I am socially conservative in many respects, but socially radical in other respects. I am not easily boxed, ideologically, and I like that. I believe in children respecting teachers and parents, but I am vehemently opposed to corporal punishment. I believe in redistribution, but I also believe in reconciliation. I am the child of evangelical parents, but my best friends are Muslims, Jews and non-believers. People find this hard to accept because of the ideological commitment to pure types.

In letter #76 you say, "Make wide turns around people who use the word transformation when they really mean domination." It sounds like you have experience with these kinds of people. Does the sentiment you are fighting against also come to the fore among students and young people? If so, to what degree, and to what would you attribute this?

More and more people, including youth, are beginning to sense the meaning of an otherwise good word, “transformation”, as used by the ruling party to impose a narrow, Africanist meaning to it – who can forget the frequent reminder of the struggle being about Africans in particular? And how the top six exclude anyone who does not fit the ethnic profile? We need to reinvest the word “transformation” with a much broader, inclusive set of meanings rather than allow it to be ethnicised by those in power.

Lastly, you conclude your introduction by mentioning that the exchanging of thoughts on social networks indicates that many discussions still need to take place and that the conversation should continue. Is the kind of discourse that generally takes place in the South African media constructive or destructive by nature? How does one find a balance between challenging and criticising that which is bad and celebrating that which is good, considering the impact opinion pieces have on the discourse?

We do not talk; we insult. We do not exchange ideas; we impose our own. We do not listen; we shout. The media is a culprit in this respect. I read Afrikaans and English newspapers on the same day; it is as if you are in a completely different country. An overweight not-so-young man dominates the headlines daily when he should be ignored. A youth league leader makes a provocative statement, and we give it credence in the media. We exaggerate bad things in the media and return over and over again to images of trauma, whether it is the skin of a burnt child or the beating of a student in a school or video sex among teenagers – as if to feed an insatiable appetite for the gross and the unspeakable. We do not encourage thought, only reaction. We march when we should pray. We hurt when we should heal. We scream when we should meditate. We are a wounded country.