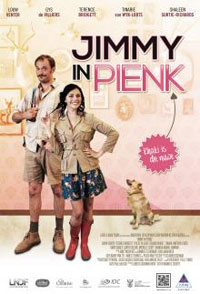 What starts out as a freaking funny spoof of backward plaasmense, flaming queens and lefty hippies soon turns into a heartfelt exploration of the insecurities and the heartaches felt by all. And it does not become soppy!

Spoof
Jimmy has cracked heels, packs boiled eggs as padkos, calls every female tannie, kisses everyone on the lips and takes his time with drukkies. He wears two-tone shirts, a necktie with his fleece and a Leatherman on the hip!

Rika, Jimmy’s love interest and lefty hippie, will eat only fruit that has fallen off the tree by itself. She faints every five minutes.

Dialogue
The dialogue flows, it is sharp and almost never unnecessary.

Balance between humour and drama
Even though the film stays funny and light-hearted throughout, it deals with some complex issues.

Jimmy tries to live up to his father’s expectations. He wants to be a sheep shearer, but that is too creative according to his dad, and men are not creative! Funny, but sad.

Frederique is still hurting from being chased off the family farm because he is gay. He tries to destroy Jimmy, the symbol of his heartache, but yet paints a beautiful landscape of the farm. He longs to be accepted.

Bunny, a hilarious Terence Bridget, confuses hunger pains with loss, and when he coaches Jimmy on how to succeed in reality TV (and life, actually) he tells him to pretend to be super-gay, because everyone loves an ougat mof. Funny, but sad.

One of the most poignant scenes was Jimmy’s mom “moving in” with her dead husband by sleeping next to his grave. The scene is, however, immediately made hilarious by the hapless debt collectors spying on her. In fact, they provide a lot of the humour throughout the film.

The moral of the story?
Jimmy breaks down the stereotypes and shows we are all human. The film also points to our solitary lives removed from one another and from nature – Jimmy has to hide his creative side on the farm; in the big city people no longer hug one another and they carry their dogs in little handbags; Bunny thinks he needs to be super-gay to be accepted; Frederique can’t deal with aging, so he hides away; Jimmy initially thinks being gay is unnatural and a choice, etc, etc.

Conclusion
Jimmy in Pienk is funny, moving and a must-see South African film.