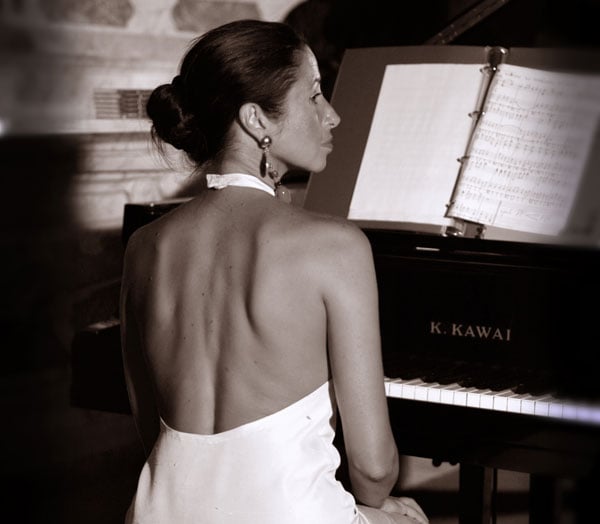 The Italian pianist Silvia Belfiore has a special infinity for New Music. She will perform a special programme focussing on music by African composers on Sunday 28 July at 16:00 in the Enoch Sontonga Hall at Unisa.

Among the works are Nonyana (The ceremonial dancer) and two pieces from Images from Africa by the celebrated South African composer Stefans Grové. Prof. Grové, who has dedicated compositions to her, celebrated his 91st birthday on Tuesday 23 July. Ms. Belfiore has performed his music all over the world, including North and South America and Europe.

The only American composer represented on the programme is John Cage. His Mysterious adventure for prepared piano will open the concert.

Other works on the programme are by Kwabena Nketia and Fred Onovwerosuoke from Ghana, Akin Euba from Nigeria, Gamal Abdel Rahim from Egypt and Joshua Uzoigwe from Nigeria.

The piece Beri by Giovanni Sollima will represent Ms Belfiore’s homeland on the programme.

Silvia Belfiore completed her music studies at the University of Bologna. She was granted a scholarship in Darmstadt, Germany to further her studies in new music.

In her career she has taught piano and music history in several conservatories of music in Italy and Portugal, and is currently a member of the faculty of the Pavia Conservatory of Music.

In addition to her teaching, she maintains a busy schedule of performing and recording. Silvia Belfiore has given more than 440 concerts as soloist and as a chamber performer in Italy, Switzerland, Germany, France, Greece, Rumania, Hungary, Poland, Portugal, Spain, Mexico, USA, Brazil, Moldavia,Togo and India.

She has been a participant in the famous "Ferienkurse für neue Musik" (Summer Courses for New Music) held in Darmstadt, Germany in 1986, 1990 and 1992. She was granted a scholarship from this institute in 1990 and 1992.

Ms Belfiore has also received various awards for her artistic achievements including “Laboratorio Lirico” for contemporary music in 1989, awarded by the Teatro Alessandria.

In addition to her teaching, performing and recording, she is also the artistic director of “Omaggio a ...”, an international festival of contemporary music in Acqui Terme (Italy).

Silvia Belfiore’s discography is varied, spanning diverse periods of music. She has recorded contemporary music for viola and piano (Music Worx label); compositions of Respighi, Petrassi and Perosi for violin and piano (VideoRadio Recordings): Luigi Perrachio’s music for violin and piano; Francesco Molino’s music with the Accademia Domino (on this recording she performs on a fortepiano); two CDs “La musica di Napoleone”; and a DVD Warner Brothers for piano and percussion. She has appeared on various television and radio broadcasts in Italy, Moldavia, Germany, and Brazil.

Tickets are sold at the door for R90 (adults) and R70 (students and pensioners).