Is illness God’s punishment? Theological perspectives from the Bible and the Apocrypha

The purpose of this article is to analyse the relationship between illness and divine punishment in the Bible and the Apocrypha. What are the perspectives of the Bible regarding this issue, and how did these perspectives develop within the various biblical traditions? The overview of the problem of illness and punishment begins with the Hebrew Bible, as well as the Old Testament Apocrypha. Special attention is given to the concept of illness in the development of the doctrine of retributive justice in the Hebrew Bible, especially with the Deuteronomist (and the Deuteronomistic history). The article emphasises the variety of voices about illness and punishment in the Hebrew Bible and Apocrypha, with special reference to figures like Job and Tobit, who challenge the doctrine of retributive justice. Thereafter, the various perspectives from the New Testament are examined, also emphasising the variety of views about the theme of illness and divine punishment. Finally, it is asked what the possible impact of these biblical views might be on society today, especially in light of the COVID-19 pandemic and its aftermath.

In December 2019 the COVID-19 pandemic struck the world, dramatically changing the way of life for billions of people across the globe. As the pandemic worsened, some individuals said that this disease is a form of divine punishment. For instance, according to Eyewitness News and the New York Times, Zimbabwe’s minster of defence, Oppah Muchinguri, made a public statement on 15 March 2020 saying COVID-19 was God’s punishment of the West for the sanctions against Zimbabwe. On 27 March 2020 the Pope stated explicitly that COVID-19 was not divine punishment. Al Jazeera reported similar sentiments among the Muslim population, especially since the cancellation of Nowruz (the Persian new year) celebrations. Others felt that the virus had a demonic origin. This resulted in many pastors’ calling on Christians to “wage a spiritual war” against the virus, and some unfortunately proclaimed that they will not stop gathering in their numbers. Locally, in South Africa, bishop Bheki Ngcobo of the South African Zionist Church said that they planned still to gather for Easter services, despite the lockdown period that was instituted in South Africa at the end of March 2020. Fortunately, the majority of religious leaders did cancel their gatherings, and sought alternative ways to minister to their members. The problem of illness and disease as possible divine punishment is clearly still on the minds of many people in our contemporary society.

We find various views about this problem in the Hebrew Bible. In the Torah there are several traditions that grapple with the problem. On the one hand we have the early plague tradition in Exodus 7–12. In this tradition, however, illness and disease do not actually play a major role. While we often speak of “plagues” in this regard, the correct terminology is more in the line of “signs” or “wonders”. It is only with the tenth plague, which was probably added later in the tradition, that we see a more pronounced plague tradition in Exodus. In this sense, then, illness is not so much divine punishment as it is a divine sign or wonder, of which the purpose is to convey God’s power and sovereignty as the God of Israel. The notion of illness as divine punishment is much more prevalent in the Deuteronomistic literature. Deuteronomy 7:15 reads: “The Lord will turn away from you every illness; all the dread diseases of Egypt that you experienced, he will not inflict on you, but he will lay them on all who hate you” (New Revised Standard Version [NRSV]); and Deuteronomy 28:59–60: “Then the Lord will overwhelm both you and your offspring with severe and lasting afflictions and grievous and lasting maladies. He will bring back upon you all the diseases of Egypt, of which you were in dread, and they shall cling to you” (NRSV). In the Deuteronomistic tradition we clearly see an illness tradition (rather than a plague tradition) that is associated with the events in Egypt. In these texts, illness functions as retribution for disobedience against God. In the framework of the doctrine of retributive justice in the Hebrew Bible, illness plays a key role in the context of the Deuteronomist. Moreover, the nature of the illness in this framework of retributive justice has a very pervasive ethnic element. God does not simply punish with illness, but he punishes with the dreaded and even evil (r[a]‘) diseases associated with Egypt. This dangerous kind of rhetoric sounds very similar to the rhetoric employed by Donald Trump, who called COVID-19 a “Chinese” virus. This type of punishment is also prevalent in the so-called Deuteronomistic history, especially in Samuel and Kings (with various retellings in Chronicles later).

In the Deuteronomistic history (and some prophetic traditions) God punishes people especially with skin diseases, known as “leprosy” (but not modern-day leprosy). This is true despite the fact that a text like Leviticus nowhere speaks of leprosy as the result of sin (impurity in itself is not necessarily sinful). Examples of people punished with leprosy include Elisha’s servant Gehazi (2 Ki. 5:27), and Abner (2 Sam. 3:28–9). Most famous, perhaps, is Miriam, who is also punished with temporary leprosy after showing insolence toward Moses (Num. 12). The Deuteronomist develops this tradition even further into a legal prescription in Deuteronomy 24:8–9: “Guard against an outbreak of a leprous skin disease by being very careful; you shall carefully observe whatever the levitical priests instruct you, just as I have commanded them. Remember what the Lord your God did to Miriam on your journey out of Egypt” (NRSV).

There are also dissonant voices in the Hebrew Bible and Apocrypha with regard to illness as a punishment for sin. The most prominent figure in this regard is Job. The Book of Job, in fact, challenges the traditional teaching of retributive justice. Although Job is not sinful or disobedient, it appears that God severely punishes him, also with sickness. In the Apocrypha the figure of Tobit is similar to Job. Tobit is also described as a righteous person, but becomes blind, almost by fate, and is only later healed of his blindness. However, some texts in the Apocrypha, like 2 Maccabees and the Wisdom of Ben Sirach, still accept illness as an aspect of retributive justice.

The New Testament also exhibits a variety of voices with regard to illness as punishment. A text like John 5:14, where Jesus says to the man who was healed at Bethesda, “See, you have been made well! Do not sin any more, so that nothing worse happens to you” (NRSV), seems to confirm the teaching of illness as retributive justice. Yet in the same book, in John 9:1–3 (the story of the man who was born blind) and John 11:4 (about the death of Lazarus), the author seems to imply that illness is not always punishment for sin. The same author can, therefore, have a complex view of illness – some illnesses might be punishment, but others might be signs. James 5:15–6 is equally ambiguous. Paul, too, seems to hold a complex view about illness as punishment (compare 1 Cor. 11:27–31 with 2 Cor. 12:7–10, for instance). In the New Testament we also find the novel idea of illness being caused by demons.

In conclusion, the Hebrew Bible, the Apocrypha and the New Testament do not have one uniform answer on the question of whether illness is divine punishment. There are differing views about the topic in the Bible. Rather than asking whether illness is divine punishment, the biblical texts should rather help us to ask responsibly how we may construct and define the “sick” in opposition to the “healthy” in our society. COVID-19 has suddenly made us realise that we are not alone in this world, and through social distancing we are even more aware of the “other”, of our “neighbour”. When we are all vulnerable to getting the same virus we should become more aware of our shared humanity. This article argues that in the age of COVID-19 there is no place for “Egyptian disease” as we read in Deuteronomy. The communal experience of vulnerability to disease should be used to bring people together in new and different ways. 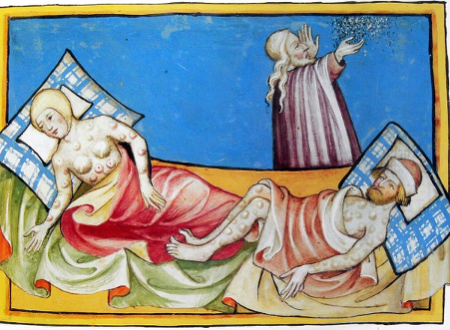 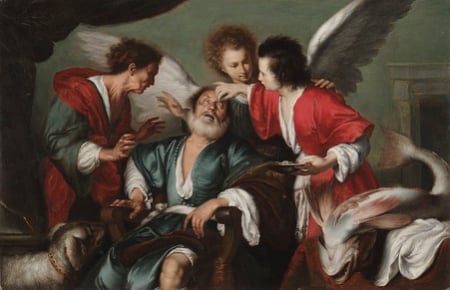 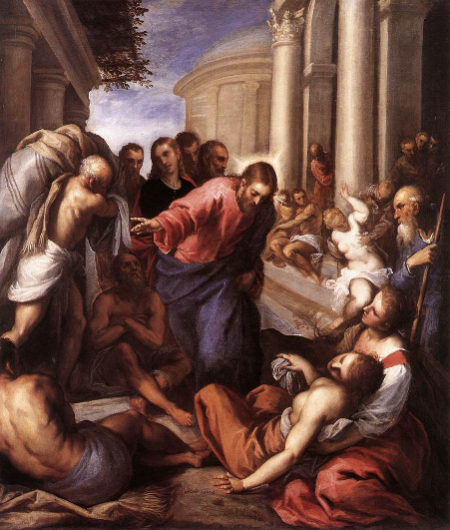 Attia, A. 2018. Disease and healing in the Book of Tobit and in Mesopotamian medicine. In Panayotov en Vacín (reds.) 2018.

Avalos, H. 1995. Illness and health care in the ancient near East. The role of the temple in Greece, Mesopotamia, and Israel. Atlanta: Scholars Press.

Beentjes, P.C. 1997. Book of Ben Sira in Hebrew. A text edition of all extant Hebrew manuscripts and a synopsis of all parallel Hebrew Ben Sira texts. Leiden: Brill.

Brodie, T.L. 1993. The Gospel according to John. A literary and theological commentary. Oxford: Oxford University Press.

Coetzer, E. 2018. The supernatural in the theomachy of 2 Maccabees 9:1–29 and its role in the communicative strategy. A syntactical, semantic and pragmatic analysis. HTS Teologiese Studies, 74(3):1–7.

Cohen, S.J.D. 2006. From the Maccabees to the Mishnah. Louisville, KY: Westminster John Knox.

Crislip, A. 2005. From monastery to hospital. Christian monasticism and the transformation of health care in late antiquity. Ann Arbor: University of Michigan Press.

De Wet, C.L. 2018. The leprous body as ethical-theological strategy. John Chrysostom’s interpretation of the cleansing of the leper in Matthew 8:1–4. Neotestamentica, 52(2):471–88.

Fokkelman, J.P. 2012. The Book of Job in form. A literary translation with commentary. Leiden: Brill.

Frisch, A. 2012. Worms, rotting flesh, and falling bowels. The power of disgust in a motif of kingly death in early Jewish literature. Dine Israel, 29:33–56.

—. 2006. Purity, sacrifice, and the temple. Symbolism and supersessionism in the study of ancient Judaism. Oxford: Oxford University Press.

Zucconi, L.M. 2010. Can no physician be found? The influence of religion on medical pluralism in ancient Egypt, Mesopotamia and Israel. Piscataway, NJ: Gorgias.