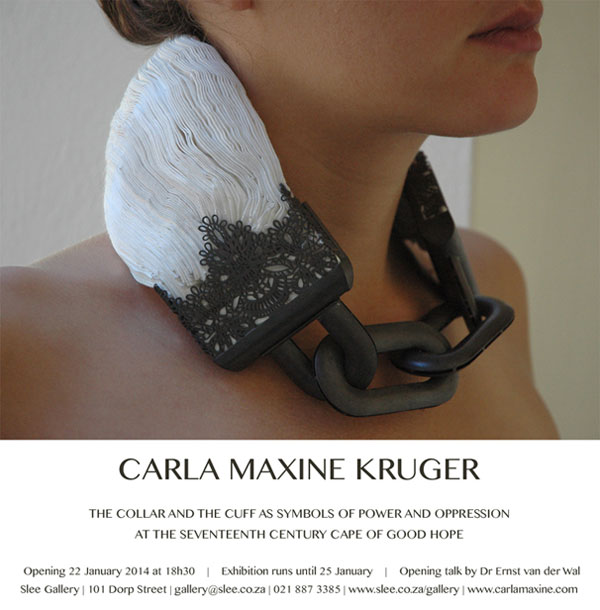 The Collar and the Cuff: a Contemporary Representation of Symbols of Power and Oppression at the Seventeenth Century Cape of Good Hope opens at the Slee gallery in Dorp Street, Stellenbosch on 22 January 2014 at 18h30. The exhibition runs until the 25th of January.

Carla Kruger’s masters exhibition is influenced by South Africa’s turbulent past, and especially the relationship between master and slave at the Cape in the 1650’s as a model
for many cultural dynamics and relationships at the Cape after that. She investigates what Homi Bhabha calls the ‘hybrid’ effect of colonialism and slavery on the culture and identity of a colony:

If the effect of colonial power is seen to be the production of hybridization rather than the noisy command of colonialist authority or the silent repression of native traditions, then an important change of perspective occurs. It reveals the ambivalence at the source of traditional discourses on authority and enables a form of subversion, founded on that uncertainty, that turns the discursive conditions of dominance into the grounds of intervention. (Ashcroft, Griffiths& Tiffin 1995: 35)

Carla aims to create pieces of contemporary art jewellery that invokes critique and investigation into this hybrid effect and subversion of authority that Bhabha explains in
the quote above. She creates a juxtaposition of the signs she claims symbolises the relationship of power and oppression at the Cape - the collar and the cuff. The white
collars and ruffs the Europeans used to wear to signify power at the Cape, and the shackles and restraints the slaves were subjected to in order to reiterate their state of
bondage are used as visual aesthetic narratives in Carla’s work to create an amalgamation of domination/submission. This amalgamation is created in order to offer a
platform to contest the power and oppression dynamic at the Cape, and on a larger scale − South Africa.