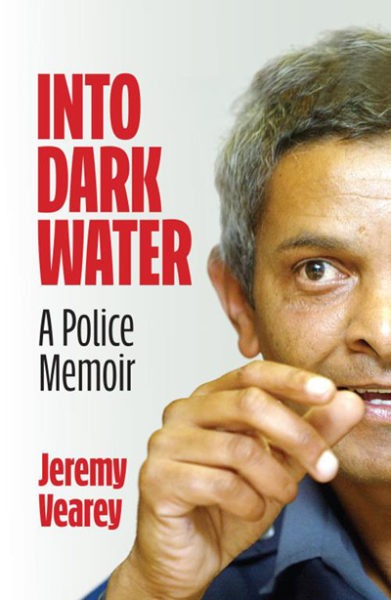 General Jeremy Vearey is something of an enigma. Even within the police service, there are two camps: those who swear he is the only straight cop in a senior position, and those who will tell you with a straight face that he has gang tattoos on his arms and answers to the leader of the Americans. And we’re not talking Joe Biden here.

There seems to be no one who holds an opinion in the middle ground.

Vearey’s new book, Into dark water: A police memoir, is as murky and uncertain as the reputation of the man himself. And its readers are likely to be as divided.

Vearey’s new book, Into dark water: A police memoir, is as murky and uncertain as the reputation of the man himself. And its readers are likely to be as divided.

There is no doubt that Vearey has stories to tell. They flow forth from him like a Cape river in winter, verily bursting the banks of the manuscript. Vearey has had an extraordinary career in the police; his life has been a hell ride of highs and lows, failures and successes. Having started adulthood as a member of uMkhonto we Sizwe and being jailed for his militancy, Vearey determinedly climbed the ladder within the new combined South African Police Service. But in this particular board game, there are as many ladders leading upwards as there are snakes demoting you back down again. As I write this, he is in the High Court fighting for his career.

There are startling disclosures and memories that jump unexpectedly from the pages. For me personally, the account of Colonel Gordon Brookbanks’s involvement as commander of the Security Branch’s covert intelligence operation in the Western Cape was particularly arresting. Brookbanks teaches history at Westerford High School, and though he has disclosed his security police past, his seniority and significance in that fascist institution was a revelation. Vearey’s description of the heavy-drinking senior apartheid intelligence officer left me reassessing my previously sanguine attitude towards the man.

There is also the reminder of Lieutenant Colonel Petros’s ongoing denial that there was any gang problem in the Western Cape. This bizarre, ostrich-like attitude from the leadership of SAPS was self-serving and viciously detrimental to good policing. Much of the internal resistance towards Vearey appears to come from his insistence that the Western Cape was the victim of organised gangs, and that these were not simply street thugs looking for a quick fix. It wasn’t a message the police management wanted to hear.

It is hard to keep track of Vearey’s various positions, as he doesn’t seem to keep any title or management position for longer than a few chapters (and in this book, a chapter is often only two pages). He ping-pongs between station commands (Elsie’s River, Nyanga, Mitchells Plain, Claremont) and senior management positions (Gang Unit, Detective Unit, Intelligence Unit). It is a bewildering journey that keeps him on the move, unable to rest his feet in any one place for long. It seems that he was regarded by some in national policing as a Mister Fixit, sent to wherever there was a crisis or the need for strong leadership. But as many positions were imposed on him as a punishment, as a silencing demotion. It is bureaucracy on steroids.

The writing is as staccato as the narrative is short. But the flavour is authentic Vearey. There is no sense that this book has been ghostwritten to make it more palatable. The perspective is that of the author, the vocabulary is genuine, the confessions are his alone. As are the accusations.

The whirlwind of stories and characters keep this book interesting, but ultimately it is a frustrating read. There is no doubt that General Jeremy Vearey knows things; he is privy to secrets, ghosts, dirt. But like with any good intelligence officer, it is disclosed on a miserly need-to-know basis.

The whirlwind of stories and characters keep this book interesting, but ultimately it is a frustrating read. There is no doubt that General Jeremy Vearey knows things; he is privy to secrets, ghosts, dirt. But like with any good intelligence officer, it is disclosed on a miserly need-to-know basis. Vearey touches on a myriad of scandals, all of them news headlines at the time, but imparts little more analysis or understanding than the Argus or Die Son did at the time. Advocate Pete Mihalik, Lieutenant Colonel Charl Kinnear, Mark Lifman, the Booysen brothers: having read Into dark water, I have no greater insights. It is probably because the author is covering 30 years of his life in under 200 pages, but the result is unsatisfying. The entire Rhodes Must Fall movement is dealt with in two pages and with a pat on the back for Vearey. Marikana is retold with searing honesty, the police held accountable in Vearey’s rendition, but again the single most shameful incident of the new police service is over in a page and a half.

This is a fascinating book. But ultimately it is the victim of its own ego. It attempts too much and provides only a superficial gloss of the events that continue to intrigue and unsettle us as a nation.

Vearey maintains that he (and Kinnear) is the victim of a “rogue crime intelligence unit” led by, inter alia, one Colonel Barker. But the book provides no insight into why this unit exists at all – whether it is “rogue” in that it is entirely above all governance, or whether it still has the approval of national management. Vearey is instrumental in securing the conviction of Colonel Prinsloo for selling hundreds of firearms that were supposed to be destroyed – whereafter he is promptly demoted. But the book provides no explanation as to why his seeming success was not applauded by the upper echelons of power. One is again left simply speculating.

And this is perhaps why so many ultimately remain ambivalent about Vearey’s credentials – the allegations may come thick and fast, the exculpation may be attractively presented, but there is a superficiality to the explanations. Either because Vearey is simply not prepared to share, or, more worryingly, because there is no foundation.

This is a fascinating book. But ultimately it is the victim of its own ego. It attempts too much and provides only a superficial gloss of the events that continue to intrigue and unsettle us as a nation.

Are property owners, or their security personnel, allowed to use force?