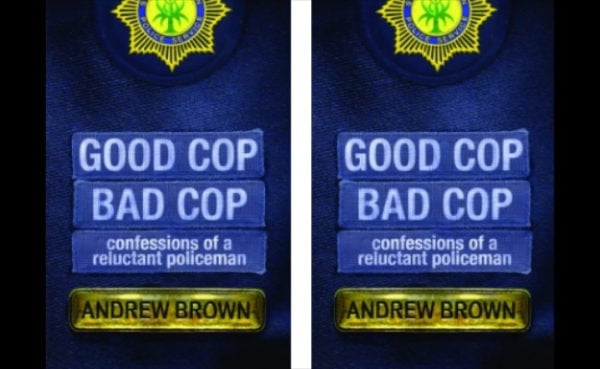 Brown has authored several books. The latest on his own journey in the police is called Good cop, bad cop.

We have recently seen disturbing scenes on television and the social media about mobs freely entering and stealing from shops – often with no police in sight.

In academic and practical terms, there are several questions that need to be asked about the social contract that ordinary citizens now have regarding their rights, because normally one would assume that the police should be able to protect us.

There are people who now act in order to protect their own, since they fear the police cannot or will not.

You are a highly trained legal expert, but you also have years of practical experience as a police reservist. You have walked the walk and done the duty.

My first question is about the right and the duty of the police to protect property. “Policing is about the thin, blue line,” is how a policeman with many years of riot control experience described it to me this afternoon. On social media, I have now seen more than one person who says things like, “Shoot the blighters,” which in itself is illegal. Please tell the ordinary, anguished citizen when the police are allowed, or even obliged, to use force to protect private or state property. May I be blunt in saying that the ordinary citizen has the idea that police have simply walked away from their duties.

Policing is a complex task at the best of times. Policing a nation in which such massive socio-economic divides are pervasive, in the middle of a pandemic, is an extraordinarily difficult undertaking. Gone are the days when a police officer could shoot a thief in the back for running away with a loaf of bread. May those days never return.

A police officer is now entitled to use force (including deadly force as the last resort) to protect his/her life or the life or well-being of anyone else. On a small scale, once it is only property that is at risk, an officer may not resort to force. Thus, if an officer sees someone stealing a car, he/she cannot shoot him. The officer must try and apprehend the suspect; if the suspect resists, the dynamic changes, as the officer is now being threatened. A degree of force may be allowed. However, when this is on a much larger scale, the police are automatically under threat. Unless they flee the scene, they will be at risk by a large mob. Increasing levels of force (tear gas, water cannons, rubber bullets) may become warranted. But live ammunition may never be used unless an officer’s life or that of someone else is under direct threat. Sharpeville and Marikana will remain stains on this country’s soul.

So, we must be careful about judging police officers who may have taken a decision that to avoid loss of life, it was better to withdraw.

The invasion of Capitol Hill by the Trump mob is a good example. Hundreds of people could have lost their lives if the letter of the law had been invoked by the guards on duty. The better course was to let the riot run its course.

Policing is a fluid, dangerous and changing situation. Not every decision will be perfect. But ultimately, everyone – even a Trump supporter – has the right to live. How much more someone seizing an opportunity to alleviate some of their poverty.

In the light of the large-scale looting taking place at present and the fact that the police seem to be overwhelmed, I’d like to understand the rights that property owners have when they are faced with a mob. We have all seen videos of looters simply smashing glass and taking whatever they want. Are property owners, or their security personnel, allowed to use force when mobs break and enter, and if so, when?

The scenes showing members of the public blasting protesters with shotgun rounds are a different matter (if the video was true). Vigilantism is not acceptable; self-defence is. And that’s not always an easy distinction to work out.

Very limited – this is a police matter. I am aware of some neighbourhood watches where members cruise the streets with weapons. My view as a lawyer and a police officer is that this is asking for trouble. The moment that a weapon is used to intimidate, threaten or hurt another person, a crime is committed. Neighbourhood watches are not private security forces, and they do not have the right to police public spaces.

That said, if a mob genuinely invades a neighbourhood and the police are not present, residents may be entitled to resist that invasion with force – but it would have to be a very specific threat and a considered response.

In many towns in KwaZulu-Natal, neighbourhood watches have set up visible guard posts with vehicles and personnel at all entrances to the neighbourhood to scare off potential looters. Technically, they are breaking the lockdown rules during the night, but are these (otherwise) legal and would they have the right to act against anyone whom they may not want to enter their town, or neighbourhood, should groups want to do that in the suburbs?

No. No one owns a public space, and the idea that “undesirables” can be harassed is contrary to our Constitution. White suburbs have a habit of reporting a “black male walking” and suggesting that the person is not entitled to be there. “Bin pickers” are targeted by neighbourhood watches – that person has as much right to be on the street as anyone else. Your bank balance does not determine your rights. The Constitution does.

Would property owners whose shops have been looted be in a position to sue the government for not protecting their assets?

That would be very difficult to prove. It has been tried in relation to other rights (right to housing, right to health), and the courts have reiterated that rights are not absolute. A right may give rise to an obligation on the part of the state, but that is qualified by resources, ability and reasonableness. The police cannot be everywhere, and they cannot anticipate every looting spree.

If the government issued a statement saying that looting is just redistribution of wealth and the police will not be interfering, that would be different. But clearly, SAPS and the government are doing their level best to get this back under control. This is why you have insurance.