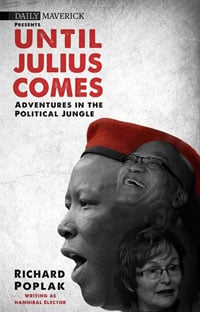 Buy Until Julius comes from Kalahari.com

Richard Poplak talks to Naomi Meyer about his book Until Julius Comes.

Rian Malan describes you as “a Joburg boykie whose parents dragged him off to Canada in his teens”. Would you also describe yourself as an outsider insider, or would you describe yourself in a different way? And if so, how?

I don’t put much stock in self-description, mostly because Life with a capital L tends to laugh at shit like that. I do know that I would have made a lousy writer and useless observer had I stayed in South Africa for my university years. Something about the interregnum in Canada (and then the Middle East) offered me a perspective that allows my writing a widescreen flavour that is authentic to my inner voice. I remember growing up in Johannesburg, reading back issues of Mad magazine and feeling totally cut off from the rest of the world, knowing that were I ever to venture forth, I’d probably return with increased powers – like Superman ditching Krypton just as it exploded. That was true of me when I was 16, and I think it’s true of me now.

You wrote this book (and, in other words, your Daily Maverick column "Hannibal Elector") about many aspects of the South African political landscape. Yet you chose Julius Malema as the central figure. Why?

I would not say I chose Julius Malema. He chose me. All I did was wander into the maelstrom with my notebooks, and this is what it spat back. You have to remember that this book’s narrative was never defined before the election, but was defined by the election itself. Had Julius Malema and his EFF fizzled out, and had Zille and Mamphele remained in a happy, healthy and successful political marriage, then perhaps the book would’ve been called something else. Oh, I know what Janet Malcolm would say about authorial choice and all that crap, but the truth is this: Malema made himself the story. I simply took notes.

Is Julius Malema still the central figure of the country’s political jungle?

Yup. The EFF brain trust were very clear with me on the eve of the election: “If we just sit in parliament and behave,” they told me, “then we lose all this momentum.” Everything we’re seeing now, all the disruptions and theatre in parliament, are very much by design. They’ve done an exceptional job of keeping the narrative ball in their court. For this I probably owe them a chunk of my royalties.

What do you see in your crystal ball regarding Julius Malema in the future of the ever-changing country South Africa?

Julius Malema is 33. Now, other famous prophets have died at 33, and while Juju’s diet, namely salted chops and Coke, may kill him, there’s every chance that he has a long, fruitful life ahead of him. If he retires at the grand old age of 75, that’s still 42 years of fun. I did all that with a calculator. Now I’ll pull out the crystal ball: he’ll be the president of this country within 15 years. 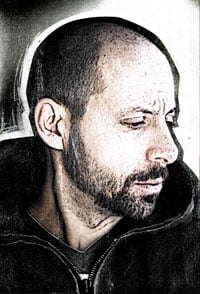 Your book is as funny as it is difficult to read from time to time. I couldn't stop reading, but sometimes wished I wasn’t living in a country where such a circus is going on most of the time. How did you feel when writing your columns?

I felt the same way you did reading them. My experiences were often funny, always enjoyable, and I love travelling around this asylum and hanging out with my fellow inmates. But when do we get some stability? When do we get a chance to heal? When do we get some down time? This stuff is disturbing, no doubt about it, and the speed of South African political life can sometimes seem like a manufactured distraction, a means of keeping us befuddled so that we keep making the wrong choices. And yes, sometimes I get saddened by it all. Guess that makes me human.

In which I ask you about the role of the journalist. No, I didn’t get that right. “In which the Helen Zille’s Democratic Alliance marries the prefect Black Presidential Candidate, only for it to go all Britney Spears-in-Vegas after four days” is a much better version than my question. But please do answer and help me with your summary of what a journalist in South Africa should do – and be.

I can only speak for myself: I want to write at the speed of South African life. My aesthetic is as true as I can make it, and in being true, is the only moral way I know how to write. If this doesn’t seem anything like any other journalist’s work, that’s not because I dislike the state of modern journalism. There are lots of stars out there. But the mandate with this work was to strip away all of the inhibiting factors that can make journalism dull, which dulls us to insanities of political life. No walls, no filters, no gloves. Journalism as bare-knuckle fighting.

Is there hope for South Africa?

Absolutely. Until Julius Comes is a hopeful book, because it’s a closely reported, rigorous investigation into the South African political process – and no one shot me for writing it. I am not in prison. Many of our politicians would like to watch me dragged behind a bakkie until my face falls off, but there ain’t much they can do about it. If we can write and talk and argue, we can fight. And if we can fight, there’s hope.

In the beginning was Marikana ... No, where did it start? What do you think were the main factors which caused a strike of this magnitude to happen?

All one needs to do to understand Marikana is go to Marikana. On one side of a field a shiny mine with big steel pipes. On the other side of the field a shitty shack town with open sewerage. I know, I know – that’s how capital works, and it’s tough, and some will get rich first, etc etc. But this country’s unfairness is written into its mining towns, which speak to the divisions – of race, of class, of outlook – that have separated us for four centuries. It isn’t sustainable, and what surprises me is not Marikana, but that Marikana remains – for the meantime, at least – a unique and terrible event in our country’s history. How this doesn’t happen every day, I don’t know.

What did you do when there was no inspiration on a particular day – or did this not happen?

When there was no story, I went looking for the deeper story. I just rooted around, and I think what makes the reporting in Until Julius Comes unique is that so much of it comes at the election sideways. I wanted the voices that don’t often get to speak. I wanted to interview the un-interviewables. I wanted to write the secret South Africa. Slow news days were my favourite. That’s when I rode the unused mine shafts.

Which was your favourite of all the columns in the book? And which was the most difficult to write?

I don’t like to play favourites. All of them were written in the fire, and it seems unfair to have a bestie when they all gave it a shot. I wrote them quickly, which means when I read them they still seem fresh to me – but don’t get me wrong, the whole process was difficult. It burned up a lot of energy, and I have a suspicion that energy is finite. I’m moving a little slower these days. Heavy is the head that wears the red beret; heavier the head that writes about it.