South African children may have watched Triggerfish productions, like the multilingual movie Khumba.

But they may not know that Triggerfish also has links with the Walt Disney Studio.

Carina, please tell our readers how you became involved with a Story Lab in 2015?

I have a friend of 20 years, Matthys Boshoff, who is busy scripting my book Wildvreemd for purposes of turning it into a movie (together with Piet de Jager). When I saw the call for entries to create an animated film by Triggerfish under mentorship of Disney, I asked my eight-year old son for ideas and he came up this the concept. I then phoned Matthys, told him about my son's idea and he helped to shape the concept into a story.

This was the basic idea:

A curious ten-year-old boy who is afraid of water and yearns for companionship, illegally raises and befriends an impulsive kraken and attempts to lead a society of sea creatures that migrated to land back to the ocean by overthrowing the mine that’s poisoning the sea.

(Disclaimer: In our story a kraken follows the interpretation of myth and legend and resembles a giant octopus as opposed to a giant squid.)

Do elaborate on the story submission?

200 years ago the ocean became so polluted that all marine creatures migrated to an island called Eden Valley. The mine’s genius scientists integrated the sea animals into society by employing their natural gifts in inventive ways. Ever since then the mine has owned the rights on all sea creatures. When ten-year-old Finn Wilds discovers a gelatinous egg in a rock pool he hides it under his bed. A kraken is born and Finn decides to raise it secretly.

After baby Blush falls ill, Finn looks for help in a supposedly dangerous yet jazzy ghetto where mine-working sea creatures live. Fish Town’s guardians take Finn and Blush captive, but Finn uses his quick wit and sensitivity to win the trust of the inhabitants of Fish Town. Soon Blush grows so big that Finn can’t keep him hidden anywhere on the island. He realises that only a healed ocean can give his friend the freedom and space to thrive – and ultimately to survive.

Mr Goldmann, the mine owner, learns that there is a kraken in Fish Town. He plans to turn it into a mega mining machine. His forces capture Blush. Finn and his new friends must overthrow the mine and rescue Blush or he will lose his best friend to a life of slavery in the deepest, darkest pits of the earth.

After you submitted your entry to Disney and Triggerfish, what happened?

Once in a blood moon you receive a letter that seems like a bridge, a passage across a river or ravine you would never have been able to cross in any other way. After the international success of its feature films Khumba and Zambezia (distributed in 50 countries and dubbed into 27 languages), Cape Town-based Triggerfish Animation Studios together with Walt Disney invited African storytellers to pitch a 4-page story outline for an animated film. When I asked my eight-year-old son Aden to brainstorm with me for the pitch, he said without hesitation: “What if the ocean becomes so polluted by the gold mines that the sea animals begin to migrate to land ...?” Director Matthys Boshoff and I developed this weird and wonderful concept into a story outline, "Fish out of water" – a narrative about an eco-sensitive, scientific whizz-kid called Finn Wilds.

Our Skype calls and most of my writing took place in the deep hours of the night when my boys were fast asleep, all during those hectic last ten day of August when our house almost got flooded by rain, the engine of our car had to be replaced, dear Gerrit got swine fever, Aden had his birthday party with 20 friends and trays filled with home-made treats on the beach, and we prepared for the annual school concert where I lent a little helping hand. For ten days writing between 2 and 5 in the morning was the norm.

Triggerfish received an incredible 1 378 entries from 30 countries across Africa. The entries were evaluated by industry experts like the writer of The Lion King and the co-founder of Aardman Animations, the four-time Oscar-winning studio.

And guess what we've received, fresh from the Story Lab oven? "We are pleased to announce that Triggerfish, with the support of Disney and the Department of Trade and Industry, have selected your project for the next phase of the Story Lab. Congratulations! As one of the top 35 projects short-listed, you are invited to attend an exclusive workshop in Cape Town held by international script consultants. After the workshop, where you will have time to finesse your submitted documents, the short-listed participants will pitch their projects again. They will be evaluated by a panel of local and international experts and up to three feature films will be selected."

In November we fine-tuned our pitch at the workshop in Cape Town. We heard that if our story was selected, we stood the chance to go on an all-expenses-paid trip to Los Angeles for two weeks in January in mentorship at Disney. During the development of the script (9–18 months) the selected pitch would be paid for each milestone and first projects could come to screens in 4–8 years.

But let's not count the fish before they are hatched, I told myself. It was extremely inspiring and humbling to have been included in the next phase of the Story Lab.

Please tell us about the workshop? 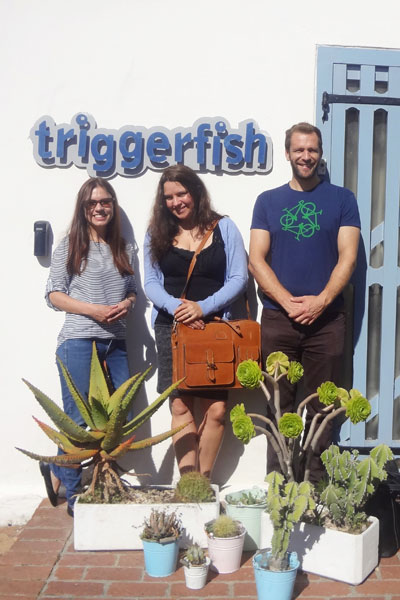 One of the most life-changing, awe-inspiring, mind-blowing weeks of my entire life. Being mentored at the Triggerfish Story Lab in Cape Town by Pilar Alessandra, senior story analyst for DreamWorks and Disney. What a delight to be spending time with some of the top storytellers from across Africa and the fab development team from Triggerfish Animation Studios. Have been brainstorming and writing on our workshop pages every day from at least 10 am to 10 pm, fine-tuning the character's voice, turning conversation into game and flaws into skill, playing with tone and story intention. Pure bliss!!!

At that point we were waiting for early December, when six of the 35 projects were going to be selected for the Story Lab.

What happened during that week?

An amazing week. In the company of gentle giants – a true story. By far the strictest animation competition on the continent, yet such a non-competitive bunch of creatives. All down-to-earth and highly professional. Amazing energy and synergy. Sad to say goodbye after a week at Triggerfish Animation. 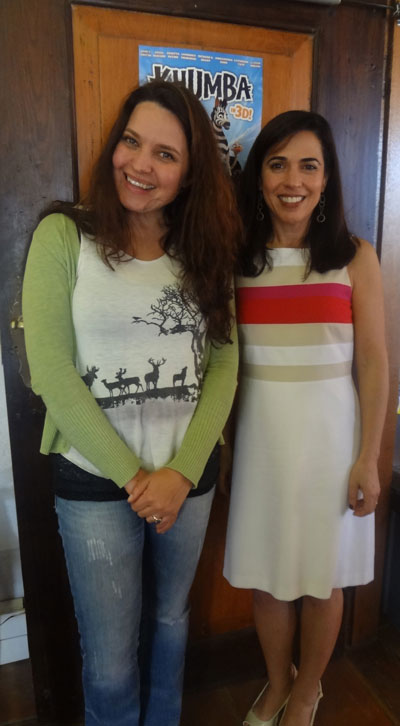 And after you knew the outcome?

Naturally it is sad not to have made The List, but I sincerely thank team Triggerfish for pulling the trigger that turned all of us into very lucky fish! What a delight to have spent time with Pilar Alessandra and the fab Storylabbers. I'd already decided at the Story Lab that I wouldn't abandon this baby, but would like to raise it to full maturity, turning it into an illustrated children's book in 2016. Hopefully animation will follow after that – we will look at possibilities.

On a personal level, boogie-boarding with Aden in the mornings and playing with the kids in the glowing algae on the beach at night, I just feel our story is a unique, enjoyable, yet important story to tell, especially in the light of the recent global eco-gathering in Paris that revealed marine life will be destroyed in 50 years if people don't take action. The ocean is a bit of a hot topic at the moment – pun intended – so I would like to stir the waters soon.

I often think about the Story Lab with great fondness.

PS Great news! The story analist of Dreamworks/Disney, who was one of the lecturers at Triggerfish, offered her mentor assistance to me in the American spring of this year.