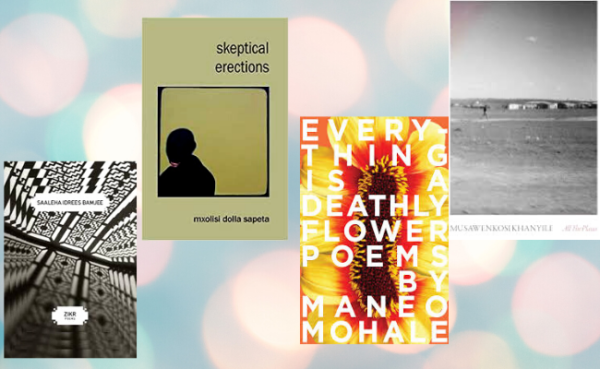 The shortlist for the Ingrid Jonker Prize for debut volumes of poetry in English published in 2018 and 2019 has been announced. The prize is alternately awarded on an annual basis to a first volume of poetry in Afrikaans or English – the two languages in which Ingrid Jonker herself wrote.

Eleven entries were received by the committee for this year’s award. The following four titles, in alphabetical order, have made it to the 2020 shortlist: All the Places by Musawenkosi Khanyile, Everything is a Deathly Flower by Maneo Mohale, Skeptical Erections by Mxolisi Dolla Sapeta, and Zikr by Saaleha Idrees Bamjee.

According to the rules of the prize the judges have to be published poets, since it is a prize from poets to poets. This year the judges were Vonani Bila, Wendy Woodward and Sindiswa Busuku.

Ronel de Goede convenes the Ingrid Jonker Committee. Finuala Dowling is the convenor of the English prize. The other committee members are Vincent Oliphant, Kobus Moolman and Marius Crous. A former chairperson Danie Marais acts as advisor to the committee.

The details of the finalists are as follows:

Saaleha Idrees Bamjee is a photographer and writer based in Johannesburg. She has an MA in Creative Writing and her first poetry collection, Zikr, was published by uHlanga Press in 2018 .

Musawenkosi Khanyile was born in 1991 in Nseleni, KwaZulu-Natal. He is the author of All the Places, a debut collection of poems published by uHlanga Press in 2019. He lives in Cape Town.

Maneo Mohale was born in 1992 in Benoni. Their work has appeared in Jalada, Prufrock, the New York Times, the Mail & Guardian, spectrum.za, and others. They are a 2016 Bitch Media Global Feminism Fellow, and have been longlisted twice for the Sol Plaatje European Union Poetry Award.

Mxolisi Dolla Sapeta, born 1967, is a full time painter, sculptor, poet, and art teacher, who lives in New Brighton, Port Elizabeth. His work has been widely exhibited in South Africa and overseas. Sapeta taught art for six years at Port Elizabeth College, and now runs art classes in local schools. In 2016 he completed an MA in Creative Writing at Rhodes University.