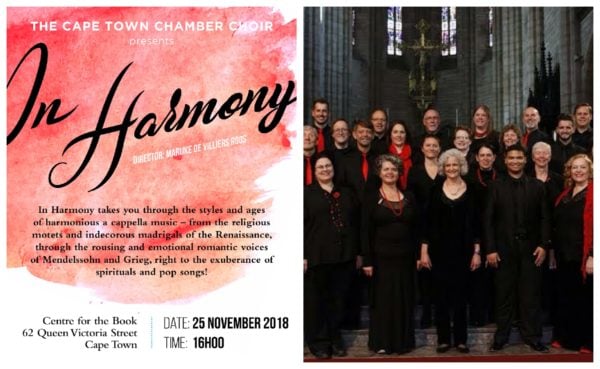 You are invited to the Cape Town Chamber Choir's In Harmony on Sunday the 25th of November 2018 at the Centre of the Book in Cape Town.

In its short existence the Cape Town Chamber Choir has established itself as one of the most distinguished a cappella adult choirs in the Cape. Its 30 members are all experienced choristers, many of whom sang in the preeminent university choirs of the country, and come from the greater Cape Town area – from Melkbos to Muizenberg, from Somerset West to Sea Point.

The choir was founded in 2010 by Leon Starker and in the same year performed and recorded Rachmaninoff’s Vespers in Afrikaans. In 2011 and 2012 Margaret Barlow was the choir leader and under her direction the choir won the Open Category at the 2011 Tygerberg International Eisteddfod. Marijke de Villiers Roos has been at the helm since April 2013.

Always eager to learn, the choir has worked with renowned conductors and singers like Kåre Hanken, Awie van Wyk, Acáma Fick, Scott Leithead and Frank Havrøy. The choir has also shared the stage with choirs from the United Kingdom, Canada, Zimbabwe, Norway, the United States and other South African choirs. The Cape Town Chamber Choir strives to present a varied and accessible choral programme of outstanding quality.

In 2015 the choir collaborated with the Cape Soloists Choir to present a programme of Bach motets, conducted by the Norwegian maestro Kåre Hanken. A year later Maestro Hanken led the choir in a programme of choral works by Brahms and Mendelssohn. During 2018 the Cape Town Chamber Choir collaborated with conductors and choirs from near and far in two concerts dedicated to the life and legacy of Maestro Hanken, who sadly passed away in June.

Marijke de Villiers Roos was trained as a pianist, obtaining her BMus at the University of Cape Town under Lamar Crowson, and her MMus at the University of Alberta in Canada. Concentrating on vocal accompaniment, she was the official accompanist at the Conservatoire of the University of Stellenbosch for eight years, and piano lecturer at the University of Alberta and the Kings University College in Edmonton. On her return to South Africa she was catapulted into the choral world, leading choirs at the Stellenbosch Waldorf School and Somerset College. Marijke founded and directed a multi-cultural community youth choir program, Siyacula, in Somerset West, before becoming the conductor of the Accelerando Choir of the Hoër Meisieskool Bloemhof. Although Marijke is not a believer in the competition world,  the Bloemhof choir received a gold certificate under her guidance at the recent World Choir Games in Pretoria. Since 2013 she is also the conductor of the Cape Town Chamber Choir.