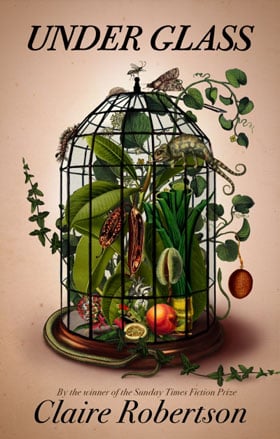 Let me start with my bona fides: I have not yet read Claire Robertson’s debut novel, The spiral house – the winner of the 2014 Sunday Times Fiction Prize. Her second novel, The magistrate of Gower, I have read twice, and when (not if, but when) I read it a third time, I will consider reading only one sentence per day. Claire Robertson writes beautifully; therefore, I want to savour it.

Please understand: we are not dealing with purple prose, overwrought by adjectives and adverbs to strangle the reader in consciously oversweet beauty. No, her sentences are muscular and precise, and draw the characters and situations clearly and with insight. I am not going to quote examples here – please, read for yourself.

Robertson’s most important achievement in that novel is the way in which she registers the sea change in Afrikaans politics in the 1930s – the surge of nationalistic emotions building up to the 1938 commemoration of the Groot Trek. Her historical research is thoroughly and convincingly integrated into her narrative.

Can her third novel satisfy so much expectation? Fortunately, the answer is: “Yes”.

The narrative of Under glass starts on 22 March 1857 with Mrs Chetwyn’s arrival at the tiny D’Urban in Port Natal after a journey of eleven months. She has met and married her husband in India, and their firstborn child, the daughter Sophronia, was born there to the nineteen-year-old mother. They decided to move to the new colony in southern Africa, but Mrs Chetwyn had to travel to England first to pack up belongings and provisions before she and her daughter, and the Indian ayah Griffin, could travel south.

D’Urban (later Durban) is no more than a hamlet at this time, and the women approach dry land in smaller and smaller boats, until the final stretch, where they are carried by strong workers. Their baggage comes ashore in the same way – even the two extraordinarily heavy cart wheels – but only weeks later due to practical considerations. An agent takes the Chetwyn group to the tent arranged by Mr Chetwyn – he is in the interior scouting for a piece of land he wants to transform into a sugar cane farm. He rejoins his family only a few weeks later, while Mrs Chetwyn has to create a life for them in limited circumstances, filled with new things with which she must contend.

Later, they procure a piece of land and found the farm. Shortly thereafter, twin daughters (Chastity and Verity) are born, and then another daughter, Maude. Then, at long last, a son named Cosmo. In the meantime, the farm is developed through the assistance of a large team of workers, including a foreman called Fuze (pronounced foo-zeh).

From this information, it is clear that Robertson’s novel investigates the theme of land ownership. The way in which the colonial government and her subjects (it is, after all, the era of Victoria) expand the colony and claim the land for themselves makes the reader aware of our present struggle with land redistribution. Early on, Chetwyn says to his wife: “They will never understand, in England. But we will join ourselves to this place” (56). In the thinking of this generation of people, who came to South Africa to farm, there is no thought that any system other than the colonial and imperial law could govern land and its ownership.

From this principle flow two important elements directing the narrative: firstly, the position of Fuze. He is a member of the indigenous population who has questioned the limitations of their culture. Therefore, he has become a pariah, but the colonial system allows him to regain his self-respect. He appreciates his cooperation with Chetwyn, and has a degree of sympathy with Chetwyn’s self-created burden: “[Fuze] can see that it is not a small matter to set yourself to remake the world” (108).

When the British Empire prepares to invade the Zulu kingdom, Fuze’s loyalty is ambiguous: will he fight with or against his family? (This invasion, known as the Anglo-Zulu War, took place in 1879, with the Battle of Isandlwana on 22 January 1879 the biggest British defeat against an indigenous army with far inferior weaponry.)

Secondly, a much stronger influence on the course of the story: Chetwyn’s father, known as “the General”, controls the Chetwyns’ destiny from Britain. Although he contributes generously in financial terms and pays, among other things, for the journey from India via England to Port Natal, he sets conditions to his generosity. Through a local attorney, he provides money for the purchase of land, but the land does not become Chetwyn’s: only the produce of the land falls to him. The owner is and remains his father. Chetwyn works very hard, not only to support his growing family, but also to ensure that the farm is worth something when he inherits it from his father.

When the General dies, the will becomes a way to govern his son’s life from the grave: a stipulation, a so-called entailment, determines that Chetwyn’s farm may only be inherited by a son; if there is no son, another male family member may claim the farm. Fortunately, a son is born: Cosmo. Cosmo is protected like gold: if something happens to him, the Chetwyns – in the case of Mr Chetwyn’s death – will have as little as they had before the farm was purchased.

(Incidentally, I am watching the whole series of Downton Abbey at the moment – a story also directed at the start by an entail and the gender of one’s progeny.)

There is a great secret about Cosmo that must be kept at all costs. As he grows older, he outgrows the smocks worn by babies, and starts to wear breeches and shirts; his hair is cut short, and through this outward clothing he is clothed with the position of heir. He learns from his father how the sugar mills function; he learns to shoot, and accompanies his father to a military camp when the colonial population starts preparing for conflict with the Zulu king.

By focusing on these external details, Robertson draws attention to colonising techniques other than land occupation and military action. The Victorian Britons’ dogged attempts to maintain their lifestyle in other cultural contexts are an important element of this process, in part because they teach their habits to the locals to employ them as servants who can help maintain this cultivated lifestyle. Clothing, in particular, is often mentioned in Robertson’s novel, and the details emphasise the trouble that being civilised demanded of people: Mrs Chetwyn “finishes her thorough toilette, and ties, buttons and hooks herself back into her stays, drawers, chemise, stockings, petticoats, wool crinoline, boots, skirt and bodice …” (56). (These details remind one of Barbara Kingsolver’s The poisonwood Bible.)

There is another way in which Robertson portrays the colonising of the new context: through her use of language. Her long, complex sentences capture the complex emotions and thought processes of her characters very well, and it becomes clear how they digest their new situation and its problems linguistically also. The interaction between English and Zulu, the learning of each other’s languages, the attempt to understand each other’s social structures all form part of the intellectual struggle for control.

The narration of the novel links with this process. The narrator focalises through Mrs Chetwyn for the most part, but there are some pieces where Fuze is the focalising character. The chapters are interspersed with short chapters with Cosmo as first person narrator.

All these characters build the narrative and are aware that life is retold as a story: “It is amazing to encounter all the ways people tell themselves the story of what is before them” (240). This insight from Cosmo emphasises humankind’s need to interpret, explain and, in some cases, hide. Mrs Chetwyn thinks, at a stage, how she will tell her lastborn child about her arrival in the country, “for when he is old enough to be schooled in the sympathetic fictions” (299).

Although the landscape is often described in the novel, it seems as if Nature makes colonising easier by avoiding large-scale disasters: this farmer and his family and workers have enough problems to contend with and do not need floods, droughts, fires and insects in addition. However, there are enough references weaved into the text about how humans lord over Nature and use trees and plants from the environment as building material to ensure that readers are aware of how people (and especially colonials) approach Nature as consumers.

The story of the founding of a country, especially one with a colonial past, is often told. Robertson focuses on a specific period in South African history when this process took place. Several aspects of this kind of narrative are not explicitly investigated, including racism; the relative status of men and women in society is much more important here.

Griffin, the Indian ayah, and the Chetwyn daughters, especially the twins, do not become round characters; even Chetwyn remains a supporting actor. Mrs Chetwyn takes up most of the telling and is portrayed as a practical and pragmatic colonial woman who does the best under the circumstances, while she does not necessarily become a sympathetic character. It is Cosmo who elicits empathy from the reader.

In the depiction of the building of a farm and a colony, in the contact between different groups of people, in the relationships within a family with their secrets and pettinesses and preferences and loves, Robertson creates another view of a particular piece of South African history for her readers. By weaving language and detail into text, she creates another literary feast and continues to build an oeuvre that is becoming more and more important in the literature of South Africa.