If A gap in the hedge were a painting, it would be a landscape by Walter Meyer. A gap in the hedge is written with the arid starkness of Meyer’s landscapes: all sun-bleached, heat-exhausted, end-of-the-line, small-town, intrinsically South African heartbreak. 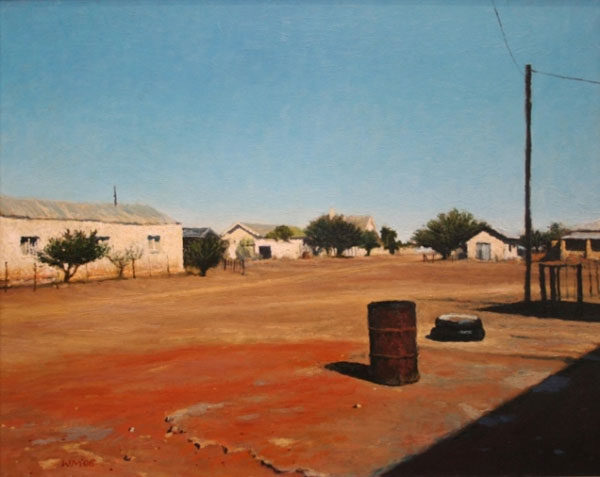 The prose is unapologetically masculine, staccato-short, bleak. The opening pages of the novel stutter out the set-up of a man who is not sure who he is. He finds himself in a dilapidated house on the outskirts of a mining town in the middle-of-nowhere, godforsaken, African veld. He decides to give himself a name: Karl. This is until he figures out who he really is and how he came to be in this hopeless house, fifteen kays from a bleak town. As the prose gives voice to Karl’s consciousness, the reader becomes aware that a schism has occurred between Karl’s present awareness and something dark and heavy from his past. He tries to function as best he can, travelling in a large Ford Falcon to the nearby mining town, which rests amongst toxic slime dams and creaking headgear. He buys the basics from the local trading store and begins to make some sort of normality of his days, bolstered by Paul Revere cigarettes and Bells whisky. He hangs up sheets as curtains, buys an outside chair and table, cooks over a fire under a tree and is soon able to create some sort of routine for his days. As he becomes aware of his surroundings, he realises there is a carbon-copy house next door to him, on the other side of an enormously overgrown hedge. No other house can be seen for kilometres except for this one, which looks as abandoned and bereft as his does. 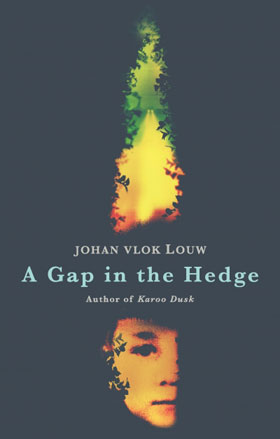 Until the day a bottle-green Valiant shudders to a halt outside the neighbouring door. It expels a hard-bitten man, a blowsy woman and a ten-year-old boy. Karl is intrigued by the family and soon becomes aware that the man, whom he dubs Rhesus – as in monkey – is a mean-spirited character who leaves the home most days to drive off on errands of a nefarious nature. The wife is a beautiful but helpless woman, fond of her booze, at the mercy of her husband. Karl dubs her Eve. On one of these days, Eve accompanies Rhesus, and the young boy appears at the overwhelming hedge, where a gap suddenly emerges. Karl invites the boy over to share his lunch, becoming aware of the fact that the boy is lonely and badly treated by Rhesus. The boy stutters. He eats food gratefully, often falling asleep immediately after a meal.

Karl encourages the boy to come over more often, eventually asking the boy to be his gardener, to help him mow the knee-high grass and tame the unwieldy garden. The boy agrees, but is cautious when Karl asks him to accompany him to the shops in the local town to buy a lawnmower and other gardening tools. The boy, Henri, is afraid that he might bump into his mother and father, who assume he is at home. Karl reassures him that all will be well. Henri manages to enjoy himself when he is with Karl, becoming more carefree as he spends time with the older man. Until Rhesus goes off into town with Eve one day and comes back in a devastating condition. Everything changes. Everything has to change. Henri is in danger now, and Karl knows it.

To say more would be to give away too much of the plot. Suffice to say that the novelist weaves a compelling narrative by leaving tantalising gaps in the story to keep the reader intrigued. When the final denouement takes place, it is satisfying and beautiful. The writing is skilfully crafted, even poetic at times. The characters and the surroundings are drawn with the accuracy of a master painter, as the author’s descriptions evoke the hopelessness echoed in the area and in the lives of its inhabitants. It’s a powerful novel, and one which recreates the landscape so well-observed in Walter Meyer’s paintings, one which resonates most strongly with me, with my having grown up in Odendaalsrus, a mining town on the edge of nowhere. There, too, people lived with the constant awareness of the fine line between life and death, where laughter could turn to tears in a heartbeat, where the future is an endless contemplation of the meaninglessness of the present. And people are abused by those they love the most.

This is a powerful novel, an excellent work of literature, and I recommend it most highly.