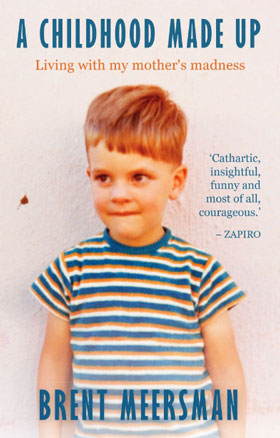 Title: A childhood made up: Living with my mother’s madness
Author: Brent Meersman
Publisher: Tafelberg
ISBN: 9780624089391

Brent Meersman’s memoir of a humble yet eccentric upbringing in a Milnerton, Cape Town, flat in the 1970’s and 1980’s reads as a stirring eulogy to his schizophrenic mother, yet also as a vivid snapshot in time.

His adoring mother, a horse-loving artist, received only rudimentary treatment and Brent, his brother and father had to look to each other for support. His father battled alcoholism and unemployment, at one point taking the whole family to Belgium, where he had found work, only for them to return a year later, defeated.

Traversing a home environment constantly on high alert for something to go wrong, waiting for his mother’s fragile mental stability to shatter, not finding support in his father, whose drinking and absences from home took a punishing toll on the family, bred in the author an almost heroic resilience.

This delicate yet brutal memoir, filled with wry humour, will resonate with many readers.