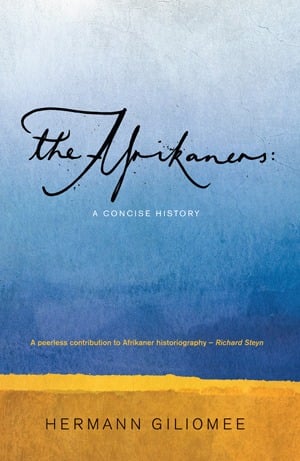 Hermann Giliomee, top historian, is seen as the world expert on the history of the Afrikaners. This shorter, updated version of his masterly The Afrikaners: Biography of a People recounts a people’s colourful history of survival against the odds, and eventual political surrender. It recreates the past with all its irony and drama in a lively narrative form. Many aspects of South Africa’s contentious history are freshly examined, leaving readers with new, often challenging perspectives.

Hermann Giliomee is an internationally renowned historian. His bestselling Die Afrikaners was adapted into a documentary for kykNET in 2018, while the original English, The Afrikaners, was published to acclaim here and in the US and UK. He has been an associate at Yale, Cambridge and the Wilson Centre for International Scholars in Washington DC.

In 1795 Britain conquered the Cape and ruled it for eight years before handing it back to the Netherlands, then under the Batavian Republic. In 1806 Britain took possession of the Cape again. In terms of a treaty negotiated in 1814 by the European powers after the Napoleonic Wars, the Cape officially became a British colony.

As a result the status of the burghers at the Cape changed drastically. They were now British subjects along with other inhabitants of the colony who swore an oath of allegiance to the British Crown. Informally English officials and commentators continued to use the names "burgher" and "boer" for the burghers. They were treated as a conquered community with all the stigma that clung to such a status.

As the historian Robert Ross argues, an English nationalism was now injected into social life in the Cape, at the core of which were ideas of respectability, civility and civilisation. The new rulers socialised with people at the Cape who before 1795 had served at senior levels of government and with some of the leading burghers, but they had scant regard for the Cape’s history and culture and the common burghers. With the exception of Cape-Dutch architecture, they were not impressed by what they found. Education was exceptionally poor and there were no newspapers, very few books and no regular musical concerts or theatre.

In the eyes of the British, the Dutch East India Company had managed the place poorly or even misruled it. Trade, industry and private enterprise had been neglected or severely restricted. The indigenous Khoikhoi were oppressed. Slavery was pervasive, along with all the ills that flowed from it.

A large part of the criticism was valid, but the cultural arrogance behind it made it difficult for the burghers to stomach. WW Bird, the Cape Colonial Secretary, described the British attitude as one of "nothing can be right or proper that is not English, and to which he is unaccustomed". A commission appointed by the new rulers in the early 1820s viewed the burghers’ character as the main stumbling block to progress. It stressed their "lack of intelligence" and their "indifference towards those facilities which are indispensable to English people". The new rulers sought to import English architecture, literature, fashion, social etiquette and behaviour, and considered English as the language of progress and civilisation.

An even harsher view was expressed of the burghers in the deep interior, especially those fighting wars on the frontier with the San (Bushmen) or Xhosa. It started with the account of John Barrow, private secretary to the first British Governor, that was published in 1806, and culminated in the Researches of the missionary Dr John Philip that was published in 1828.

These books singled out the burghers for condemnation for the way in which the frontiersmen treated the Khoikhoi, San and Xhosa people. Influenced by this line of thinking, the London magazine The Spectator wrote in 1834: "The maltreatment of the aborigines is one of the darkest and bloodiest stains in the pages of history and scarcely any is equal in atrocity to the conduct of the Dutch Boers."

A party of 4 000 British settlers, who arrived in 1820, helped to improve the British understanding of the burghers. Initially many of the British settlers tried to make a living as farmers in the eastern Cape districts, where they quickly experienced the same challenges with respect to labour and security that the burghers faced.

From the late 1820s some English colonists began to take issue with the extremely negative views the British held of the burghers. While finding their Afrikaner neighbours uncultivated and highly prejudiced against the Khoikhoi, they also made some positive comments. The poet Thomas Pringle, editor of the first newspaper at the Cape, considered the burghers "civil, good-natured", and "exceedingly shrewd" in driving a bargain.

The English merchant George Thompson differentiated between some individual burghers, who were in his view savage, indolent and unprincipled, and the community in general, which he considered of superior standing to their counterparts in many other colonies, particularly those in the Americas.

For all its arrogance as a conquering power, Britain also introduced the first professional civil service and tried to promote the welfare of the colony. In the first half of the nineteenth century its rule was still autocratic, with the Governor enjoying extensive powers and also serving as the commander of the military. He appointed people to all the important civil positions.

As was also the case under the Company, the government appointed and transferred ministers of the Dutch Reformed Church. Like the VOC, it made a substantial financial contribution to the church. Soon there were 12 Scotsmen among the 22 DRC ministers. They were convinced Calvinists and preached in Dutch. While English soon replaced Dutch as the language of government, the DRC strongly resisted pressure to make English the language of the church.

Between 1823 and 1825 a commission of inquiry investigated the administrative system of the colony. On its recommendation the system of landdrosts and heemraden in the districts was abolished and the government appointed officials to assume their functions. They were practically all English-speaking. In Cape Town the Burgher Senate or town council was abolished and replaced with officials.

The commissioners found the burghers’ colour prejudices were so serious that it recommended that those colonists who wanted to follow a legal career had to undergo training at the Inns of Court in London. Another reason for this was that a great deal of English law was imported, especially commercial law and criminal procedure, although Roman-Dutch law remained at the core of the Cape legal system.

On 1 January 1827 English became the only official language in the courts. Evidence in Dutch or Afrikaans was translated. The British jury system was imported and members of the jury were required to be proficient in English.