Like a good beverage, a good book holds promise from the first sip. This extract is used with the permission of Penguin Random House South Africa.

Matthew Blackman has written as a journalist on corruption in South Africa, as well as on art, literature and history. He recently completed a PhD in Creative and Critical Writing at the University of East Anglia. He lives in Cape Town with a dog of nameless breed.

Nick Dall has an MA in Creative Writing from the University of Cape Town. As a journalist covering everything from cricket to chameleons, his favourite stories are always those about people – dead or alive, virtuous or villainous. He lives in Cape Town with his wife and three daughters. 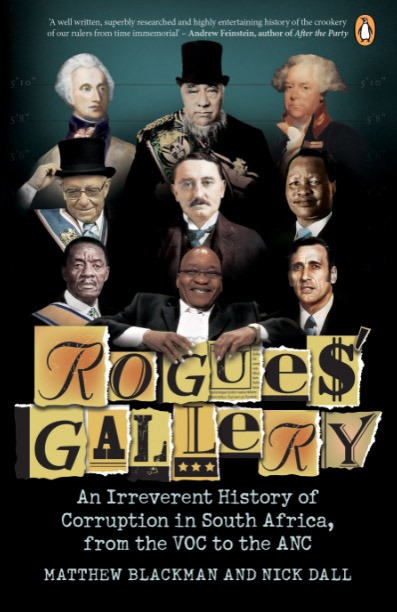 If you reckon corruption in South Africa began with Zuma or even with apartheid, it’s time to catch a wake-up call.

Rogues’ Gallery tells the story of some of the biggest skelms to grace our (un)fair shores, showing that dodgy dealings have been a national pastime for as long as South African history has been written down.

Readers are then treated to apartheid’s finest feats in corruption: from the Broederbond’s perfect ten in state capture to the Department of Information’s peddling of fake news and the apartheid state’s manufacture of – no, not illegal cigarettes – Class A drugs! And let’s not forget the hotbed of corruption that was the ‘independent’ homelands.

Add to this a few murders, plenty of nepotism and a state president who started out as a Nazi spy, and the gallery of rogues is complete. On the flipside, every chapter also features at least one brave whistle-blower – the true heroes of this book.

Irreverent, entertaining and impeccably researched, Rogues’ Gallery busts the myth that the Zuptas were the first to capture the South African state, showing that corruption has always been around – and that the tricks politicians play haven’t changed a jot.

With the National Party’s victory in 1948, the Broederbond set to work capturing the state. The Broeders had been working tirelessly to stack the civil service and education system with young junior members. In fact, the National Party’s victory against Smuts can, according to many, be put down to this covert propaganda strategy. Now, with the groundwork laid and one of their members prime minister, the Broederbond were in the perfect position to take control of all state apparatuses, to stack the courts with their judges and to hand their companies lucrative government tenders.

The scale of the capture was immense. What made it even more remarkable was that this was not an elected party setting up their stall, but a secret elite organisation with only a few thousand of what journalists Ivor Wilkins and Hans Strydom famously called ‘Super-Afrikaners’ in its ranks. Most of Malan’s cabinet positions were filled by members of the Broederbond. And within forty-three days of taking power, Malan handed control of the defence force and railways to his Broeders. His method was simple: he did a Zuma and removed General Poole, one of the most respected and decorated Second World War officers as head of the army. Of course, the National Party claimed, as Zuma did after removing finance minister Nhlanhla Nene in 2015, that they had another job for him that was of great importance. In Poole’s case, at least, the job did actually exist, and the general was spirited out of the way to Berlin on an obscure diplomatic mission.

At the head of the railways – perhaps the most important piece of public infrastructure in the country – was the young and impressive (but English-speaking) Marshal Clark, who still had another eighteen years of government service left. Clark was forced into early retirement and given an £80 000 (R60 million today) golden handshake. As Senator David Jackson (we had senators back then) pointed out, installing a Broederbonder as head of the railways ended up costing the taxpayer £95 000 (over R72 million today) once the administrative costs had been taken into account.

On retiring at the age of forty-eight, Clark stated, seemingly quite genuinely, that he was ‘sad at heart that I leave’ and that he was looking forward to the ‘other work’ the government had lined up for him. On discovering that the ‘other work’ was a complete farce, Clark insisted on further compensation from the government. Malan duly coughed up another £80 000 pension. Clark, still seventeen years away from retirement, would then become a director of De Beers – nice work if you can get it, especially with a R120-million severance package already in your pocket!

Charles Bloomberg, one of the first journalists to investigate the Broederbond’s activities, demonstrated that by 1962 every branch of the state (civil service, judiciary, police, army and parastatals) was controlled and staffed by Afrikaners. And most of the top positions were filled by Broeders. Of the forty-six top civil servants, forty-two were Afrikaners; of the country’s 318 diplomats, only three were English. The Appeal Court too had been packed with sympathetic Afrikaners. Only two (old) judges were not of Afrikaner descent; and not one English surname could be found on the senior military and police lists.

As the academic Julian Hyslop argues, the country and the government did pay heavily for these policies. The new officials placed in the senior positions of the civil service, in particular, lacked the training and expertise of the people they had supplanted. This led to an all too familiar skills shortage, an issue that plagued the government over the decades to come. The new Afrikaans recruits at junior levels were also quite often from the least educated sector of the population and struggled initially with their new tasks.

To add to these problems, an almost wholesale economic capture was on the go. As Wilkins and Strydom (those laudable muckraking journalists) noted, the influence that the Broederbond had on South African business was so widespread and fundamental that it could easily be the subject of a book the length of a Voortrekker family Bible. At the centre of this was the notion of ‘economic struggle’ in which capitalism would be used to promote the advancement of Afrikaner business. In this pursuit, the Broederbond set up an economic committee in the 1930s fronted by the Federasie van Afrikaanse Kultuurvereniginge. The federation’s committee included a list of the Broederbond’s usual suspects, including Nico Diederichs and Piet Meyer.

In October 1950, the Broederbond organised an Ekonomiese Volkskongres. Diederichs, in his address to the conference, stated in typically populist form that it was characteristic of the Afrikaner that he always ‘attached more weight to the spiritual than to the material’. Diederichs went on to say that the economic strengthening of the volk ‘was never an end in itself, but was always seen purely as a means, and indeed essential means to the fulfilment of the eternal spiritual calling of our nation’. But of course Dr Gold would say this.