Gérard Labuschagne was the head of the SAPS’s specialised Investigative Psychology Section, the only unit mandated to profile offenders, for fourteen and a half years. He is a clinical psychologist, criminologist, homicide and death investigator (trained by the Los Angeles Sheriff’s Department), a hostage negotiator, a US-certified threat manager, and an advocate of the High Court. He is a director of L&S Threat Management, an honorary associate professor in the University of the Witwaters­rand’s Department of Forensic Medicine and Pathology, and the founder president of the African Association of Threat Assessment Professionals. He has given training to the Behavioural Analysis Units of the FBI and the Los Angeles Sheriff’s Department and advised foreign law-enforcement agencies on their cases. Labuschagne is a regular speaker at international conferences and has published extensively in professional journals and textbooks. 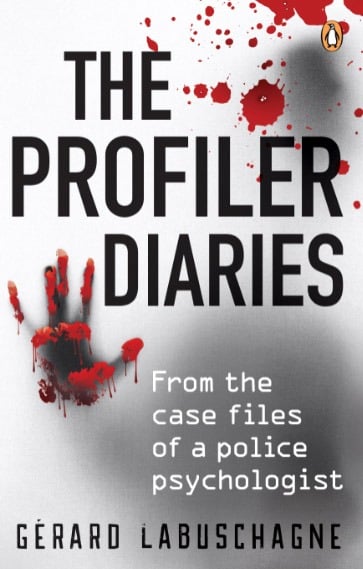 In this gripping – and sometimes terrifying – account, former South African Police Service (SAPS) head profiler Dr Gérard Labuschagne, successor to the legendary Micki Pistorius, recalls some of the 110 murder series and countless other bizarre crimes he analysed during his career. An expert on serial murder and rape cases, Labuschagne saw it all in his fourteen and a half years in the SAPS. He walks the reader through the first crime scene he ever attended, his arrest of the Muldersdrift serial rapist, his experience as the head of the task team mandated to catch the Quarry serial murderer, his involvement with the Brighton Beach axe murders, and more. Despite often being stymied by a lack of resources, office politics and political interference, Labuschagne and his team were always determined to get their man – or woman, as in the Womb Raider case.

The Profiler Diaries is a fascinating – and often hair-raising – glimpse into what it was like to be a profiler in the world’s busiest profiling unit.

On 11 and 12 July, Jannie and I were in Bloemfontein to interview Stewart Wilken, also known as Boetie Boer, who was in prison there. Wilken had lived in the seaside town of Port Elizabeth and was a commercial fisherman by trade. He was suspected of committing at least twelve murders, having initially confessed to that number, but was ultimately convicted of seven. Four of his victims were thirteen years old or younger, most of them street children, but one was his own daughter, and another his ex-girlfriend’s son. The rest of his victims were sex workers whom he approached with a con story, saying he wanted to procure their services.

Wilken stated that his motive for the murders was that he experienced sexual abuse as a child, and he had asked God for help and God hadn’t helped him. He wanted to take revenge on God by committing the same crimes that adults had committed on him.

Wilken stated, ‘I wanted to be God.’ He engaged in sex acts with all his victims, saying that while murdering them they had to shout out to God for help. He said, ‘The control over the person gave me pleasure. I would fantasise about it; it would make me happy to see them submit. I would say, “You see, God, I got you.”’ Again, the motives of power and control rear their ugly head.

Wilken would strangle his victims, often while raping them, which increased his sexual pleasure. With one of his adult victims, he also cut off the victim’s nipples and the external part of the genitalia and ate them at the scene. He also put his hand into her womb through the vagina and tried to pull her insides out. I asked him what the nipples and genitalia tasted like, but I won’t repeat what he said; suffice to say that he said he would have preferred to have cooked them first.

After the murders, Wilken would go back to most of the crime scenes to see how quickly the police reacted, how they processed the crime scene and what they were looking for. He was on a learning curve. He said, ‘I would do things more perfectly the next time, having seen what they [police] were doing.’ When I asked him what he thought of the police at the scene, he replied: ‘Some were good, but they weren’t good at catching me. I waited to see how long it took to be caught.’ Other times he went back and engaged in sex with the dead bodies.

Wilken lived in the area where he committed his crimes; this was his comfort zone. He had scenes spread out over various neighbouring areas. From the suburb of Sydenham to St George was about four to five kilometres. He would go in search of potential crime-scene areas beforehand. His criteria would be that the area had to be quiet, thus allowing him to commit the crimes. He told me: ‘When I looked for a place, I knew what I was going to do there.’

This was the stuff I wished we had more time to do, to go back and interview serial murderers. Of course, we always interviewed them upon their arrest, but then our focus was on trying to get them to agree to a formal confession or a pointing-out. I do think it is valuable speaking to them again, after conviction, to see if they would divulge even more. The problem was that I didn’t think they would be happy to see me after I’d given evidence at their trial, as it tended either to result in more convictions for them (in the case of a linkage analysis) or a longer sentence (in the case of a pre-sentencing report).

If you watched the Netflix series Mindhunter, these were the kind of interviews that were done in the early days of the FBI’s Behavioral Sciences Unit (which later became the Behavioral Analysis Units).

On 26 and 27 July, Jannie and I were back in Modimolle to check in on the murder series they were dealing with there.

Then, in the early evening of 31 July, we were called to attend another crime scene in the Quarry series.

The victim was found among the boulders surrounding the quarry. She was only clothed in a black bra, which had been lifted to expose her breasts. The victim was already in an advanced stage of decomposition. The autopsy reported three penetrating skin wounds in the anterior chest area, which were round and pin-like, with a two- to three-millimetre diameter. A rape kit was done at the autopsy, but no DNA was detected, which was not surprising when you took the state of decomposition into account. But again, you have to try. The victim’s fingers were removed at the autopsy for the SAPS forensics experts to try to obtain fingerprints, as was her head, to do a facial reconstruction. Ultimately, the cause of death could not be ascertained.

We were eventually able to identify this victim, thanks to the task team reviewing all missing person’s reports as part of our initial steps. A missing person’s report was filed for this victim after she went missing on 29 May; ironically; this was the day we formed the task team. The report had caught our attention because she had come to Pretoria from KwaMhlanga on 22 May, after someone by the name of Jabu had contacted her and offered her a job. Her boyfriend, Jerry Mahlangu, accompanied her.

They arrived in Centurion and she contacted Jabu, who said she must come and meet him. She left her boyfriend to go and meet this man, but came back shortly afterwards and told Mahlangu that everything was okay, and that she would meet him at home later. Of course, she never returned.

When we reviewed her missing person’s report, we thought that she could be one of our victims, and now we had found her body. We had also already been tracking her cell phone, which was still active after her disappearance, before we even found her body. She was identified as Selinah Mahlangu, and she was thirty years old. Our next task was to try to locate her boyfriend.

While at the scene, I took a walk along the boulders, looking for any evidence. I walked about 80 metres and decided to turn back because we had called the dog unit out, and it was getting dark. If I had walked about 20 metres further, I would have come across the second body that we would find that day.

Not long after the dog unit arrived, they found the other victim. She was also tucked away among the boulders. This woman was wearing only a white bra, pulled down below her breasts, and brown leather ankle boots with socks. The autopsy found that she had multiple, pin-like stab wounds to the neck (six of them), twelve to the chest and five to the abdomen. My suspicions were that they were made by a screwdriver. Since skin stretches and retracts, it’s difficult to determine the exact size of the weapon that was used, but in a later case, which I will discuss in the timeline, the surviving victim did say that the suspect had stabbed her with a screwdriver.

In this case, the stab wounds to the chest had penetrated the victim’s heart and caused her death. Her fingers were also removed during the autopsy for identification purposes, but once again she was never identified.