Like a good beverage, a good book holds promise from the first sip. This extract is used with the permission of Penguin Publishers. 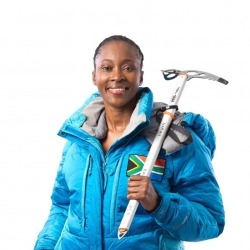 Saray Khumalo is an award-winning South African mountaineer and the first black African woman to summit Mount Everest and ski to the South Pole.

She was born in Zambia, is of Rwandan heritage, and has lived in Eastern, Central and Southern Africa.

Saray’s accomplishments include being a mother to two boys, holding a Guinness World Record, and, at the time of writing this book, working as an executive and corporate leader in the financial services sector. As a leadership and transformation coach, she focuses on women executives and entrepreneurs.

Saray is also a global keynote speaker and founder of the NPC Summits With a Purpose, which uses mountaineering to raise funds to promote literacy and education by building physical and digital libraries in disadvantaged schools. She believes that education is the great equaliser, capable of changing the narrative for the next generation.

In her podcast ‘Because It’s There’, she talks to successful African and global leaders about their experiences and philosophies on leadership. 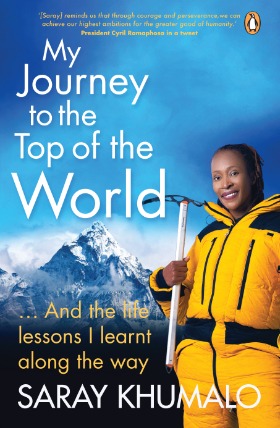 ‘This forms the nub of a dilemma that every Everest climber eventually comes up against: in order to succeed you must be exceedingly driven, but if you’re too driven you’re likely to die.’ – Jon Krakauer

In this truly remarkable life story, Saray Khumalo shares her epic journey to the top of the world: Mount Everest. From her childhood in Zambia and Zaire, to a corporate career in South Africa, through marriage and motherhood, Saray harboured one overriding ambition: to reach the summits of the world’s highest mountains. She first summited Mount Kilimanjaro, and then others, but her ultimate goal was to summit Everest. After three unsuccessful attempts, Saray became the first black African woman to summit the world’s highest peak. Her success was hard won, though – along the way, she suffered severe personal setbacks, serious health issues and life-threatening injuries.

But her perseverance finally paid off, and Saray’s success at high altitude has helped change the narrative about who belongs on the mountains and whose stories are told. Saray’s story, which redefines common perceptions about what women are capable of doing and achieving, will inspire girls and women from all walks of life. In this fascinating memoir, she shares not only her incredible mountaineering feats, but also the lessons she learnt about life, perseverance and failing forward.

The Tenzing-Hillary Airport at Lukla was built in 1964 under the supervision of Sir Edmund Hillary himself, and it has the dubious honour of being the most dangerous airport in the world. Flights are often delayed, or the airport closed, because of changeable weather, high winds, cloud cover and poor visibility. Accidents and crashes are not uncommon, for the same reasons.

On the day we were due to leave for Lukla, flights were cancelled due to bad weather. Now, this was what’s termed ‘Everest season’ – the best time of year to climb Everest – and almost every other foreigner in Kathmandu was flying to Lukla. The flights were chock-a-block full. In this situation, if for any reason you miss your chance to fly out, you go to the back of the queue and wait.

It was excruciating. I’d go onto Facebook and see that this group or that had landed at Lukla and were on their way to Everest Base Camp (or EBC, as we climbers call it). And here we were, flipping stuck in Kathmandu with no clear time or departure date after missing our flight!

Every day, we waited and hoped.

On the third day, Dawa had had enough of waiting and complaining climbers with itchy feet. He made another plan. We would take a bus to Jiri, a little village close to the mountains, and from there we would fly in one of those big Russian helicopters to Syangboche, above Namche Bazaar, the last town of any significant size before EBC.

Although a flight would have been quicker and easier, the bus journey was a rather remarkable experience, in that it allowed us to see quite a bit of the country. The most noticeable thing, aside from the beauty of the mountains, was how very poor the people were and how simply they lived. I’ve seen poverty in Africa, and I think the living conditions are better in the sprawling Alexandra township in Johannesburg than they are in some of those villages in Nepal.

What is distinct, though, is how content the people seemed to be. They would happily receive you in a tiny little house and offer you some tea. It humbled me, receiving their hospitality. It made me think about Africa and how we’ve got used to feeling sorry for ourselves and believing that we’re second-class citizens in the global village. In fact, we are blessed in many ways. It’s time to start appreciating that. Do we have problems? Absolutely. Does everybody else? Yes, they do.

In Africa, we discuss our problems with everyone and complain about them constantly. We are so caught up in our problems and complaints that we don’t appreciate our many good fortunes. If those people could come out of those little houses and smile and invite me in, and think it’s okay for me to come in and have tea with them, then what am I embarrassed about? I’m proud to be from Africa.

There were some hair-raising moments as our bus made its way up the narrow, winding road. We were halfway up a pass when I saw another bus, absolutely packed inside, with more people and chickens sitting on top of the bus, coming down the mountain. Well, this is interesting, I thought to myself. I wonder what’s going to happen now, because there’s clearly not enough room for two buses to pass each other? And yet somehow, against all the laws of physics, the two buses managed to do just that.

We’d hardly got started on the bus journey when Sebastien, the French guy who was on our expedition, got sick. One thing Sibusiso said to me from the very beginning was, ‘Whatever you do, just make sure you don’t get sick.’ It’s quite funny – you have all these super-fit, really tough people embarking on this incredibly hazardous expedition, and everyone’s completely terrified of getting a sniffle or a bad tummy. Long before Covid made it the norm, we mountaineers were constantly rubbing our hands with hand sanitiser and wearing buffs to protect ourselves from the dust, because you can’t afford to get an upper-respiratory infection. We only drank bottled water. If I had to use a loo, I went armed with wipes and sanitiser.

I don’t know what poor Sebastien had eaten, but he had a runny tummy, and we had to stop the bus every so often. We could see him losing weight from one day to the next. After the winding roads and terrifying passes and all the loo stops, we finally made it to Jiri. Sir Hillary and Sherpa Tenzing had left this town in 1953 to start the climb that would result in the first Everest summit. Now it was our turn. It felt momentous. This was it, the start of the expedition to the top of Mount Everest!

The next morning, our party gathered at the helipad to board the helicopter. The Russian pilot emerged, sipping from a flask, and my first thought was, ‘Is that coffee or vodka?’ He and a few helpers unloaded the cargo from the aircraft. Planks and building materials were taken out of the body of the helicopter and piled along the airstrip. There was a bit more shouting in Russian, and then someone came to sweep out the empty helicopter. Someone else opened up a nearby tent and hauled out seats, which he put into the space where the planks and building materials had been minutes before. It was now a ‘passenger plane’.

But we weren’t ready to take off yet. It appeared as if there was a bit of maintenance work to take care of, because our Russian pilot was now on top of the helicopter with a spanner, fixing something. Oh my God, I thought, we’re supposed to travel in this thing? With this guy? I was freaking out! But I was very much aware that the people around me were watching me closely and judging how I might react on the mountain. I did my best to present an attitude of ‘business as usual’ as I boarded that helicopter, but my heart was in my mouth.

We took off without incident. Despite my fear and lack of confidence in the pilot and the craft, I was able to appreciate the beauty of the view as we took off from the little village and flew over the mountains, the rivers meandering down their slopes, little houses scattered all over the mountain, so high and remote. Gazing down on them, I thought how strange it was that that’s somebody’s village, somebody’s home, and a child probably leaves there every day to go to a little school somewhere.

It seemed like a simple life, pure and uncluttered. In some ways, my own life had been pared down to the essentials. Everything I needed for two months was in my daypack and the two duffel bags. I thought about all the stuff in my house back in South Africa. Honestly, what did I need all that crap for? I realised that I didn’t want or need much. I certainly didn’t need a fancy brand of clothes or an expensive handbag.

That realisation never left me. I had never been a status-conscious shopper, but my buying patterns changed permanently after that Everest trip. My philosophy is that I don’t need much, but I’ll spend money on what’s important. If it’s anything to do with climbing, I’ll get the best brand. I’m not going to compromise on my gloves and risk getting frostbite.

I’ve got an expensive Garmin watch because I need it to track my training and climbing. But a fancy Gucci watch? It doesn’t mean anything to me. I feel the same about my car. I’m a Mercedes-Benz girl. I’ll always go for a Mercedes because it’s safe and solid, and I’ll keep it well serviced.