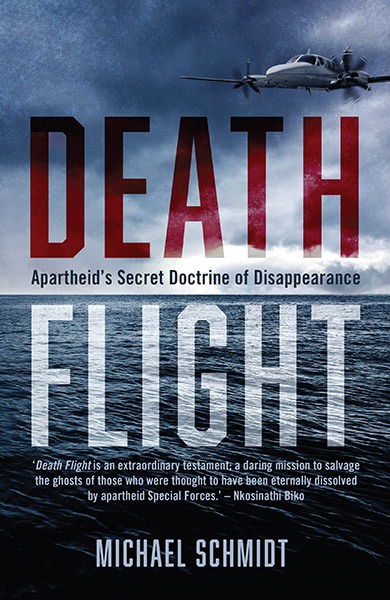 Michael Schmidt is an author, investigative journalist and defence correspondent with more than three decades' experience in conflict reporting on six continents, including war correspondence work in Guatemala, Darfur and Lebanon.

In the late 1970s, as the apartheid government fought a desperate and dirty battle to stay in power, its security forces devised a chilling new tactic. A shadowy, topsecret unit called Delta 40 was established, tasked with the murder of hundreds of ANC, PAC, and SWAPO members. Victims’ bodies were flung from aircraft into the Atlantic Ocean off the coast of South West Africa.

Based on the detailed analysis of flight logs and numerous interviews, Death Flight sheds shocking new light on one of apartheid’s darkest chapters.

After a cold, clammy, windy morning with the temperature bottoming out at 9ºC and with humidity peaking at 70% at 8:00 am, at least it was destined to be more pleasant than the previous day. On this partly cloudy Thursday, the weather station’s prediction was that the wind and humidity would fall through the day while the temperature would climb to a peak of 19ºC at about 8:00 pm.

That morning, Major Neil Kriel received a radio message from Major-General Fritz Loots. He was to fly from Otjiwarongo to Oshivelo to pick up two packages for ‘disposal’. He knew in his gut – after so many kills, did it quiver even then? – what this meant: he would have to pick up two human corpses from the police and make them disappear into thin air.

As Kriel later recalled during the Wouter Basson trial: ‘We had a message from the SAP, who did the first delivery, two bodies, to us and we went into Oshivelo, which is just outside or just inside the Operational Area, to do the first pick-up.’ Oshivelo, being on the boundary of the Operational Area, was an ideal delivery point, as D40 operatives, posing as civilians, mostly eschewed the military zone – unless they were on pseudo-ops raids or reconnaissance missions.

Kriel hefted his considerable bulk into the cramped confines of the Piper Seneca II’s cabin, entering over the wing through the starboard door and squeezing across the co-pilot’s seat to lodge himself in front of the forked joystick; the slighter Johan Theron then buckled himself into the co-pilot’s seat. On arrival at Oshivelo, the bodies turned out to be those of two PLAN guerrillas who had either been tortured to death or who had otherwise died in custody. Kriel said the SAP’s ‘Lieutenant Nel’ who handed the bodies over had been ‘subsequently killed about a week later’. It has not been possible for this author to identify this police officer.

Theron recalled the incident differently, claiming that the POWs were alive on delivery: ‘The first person was a SWAPO terrorist.’ He testified that he had received from EMLC head Dr Jan Coetzee an ‘anaesthetic dart’ usually used to ‘immobilise their animals’. But while Coetzee agreed at the Basson trial that the EMLC had indeed possessed animal tranquiliser darts, he denied they were ever supplied to outside entities – or that he was ever involved in using chemicals to eliminate people. The court accepted his version.

Coetzee testified that Theron had visited the EMLC in about July/August 1980, close to Coetzee’s retirement, and told him he wished he could also retire as ‘there are operations on the go where people are injected and thrown out of aircraft into the sea’ – which scared the scientist into hushing him up, not wanting to know about such ‘security things’. Theron insisted in testimony: ‘They [the EMLC] gave me a dart and said it would kill him. I had the anaesthetic with me. We got the person – I can’t remember his name; in truth I never bore knowledge of the names of any of the people we handled, because it wasn’t important to me.’

The two prisoners were stashed in the aircraft’s aft cabin and injected in their buttocks with the anaesthetic darts. Kriel and Theron flew with their now-unconscious ‘packages’ back to Otjiwarongo – probably to refuel – and then onwards to Kamanjab. Before landing, they probably first circled over the Kamanjab airfield, halfway to the Skeleton Coast. With its X of dirt runways intersected by a P-shaped taxiway, it looked somewhat like the Chi-Rho symbol for Christ. They ensured that the strip was clear to land, as there was no tower, but also because they wanted no witnesses. Kriel would later, privately and punctiliously, note the route and the landings, the stations-of-the-cross of his victims, in his pilot’s logbook.

Unfortunately, in the subsequent trial, none of the pilots of ZS-KFG were rigorously cross-examined about each and every death flight, so we are forced to reconstruct what little we know from the pilots’ logbooks and whatever testimony was given in relation to certain specific flights.

At Kamanjab the pseudo-operators probably surreptitiously, nervously checked their cargo in case anyone was looking, then flew on to the Skeleton Coast where they landed at Meob Bay, deep in the northern region of the Sperrgebiet, the famous ‘Forbidden Area’ to which most people’s access is restricted by law because of its diamond-rich dunes.

There, the two pseudo-operators removed any clothing the two bodies had on, removed the rear door of the aircraft and hid the door and the clothing in the sand. They then took off again, heading out towards the Atlantic Ocean with the bodies. With the rear door removed, the noise from the turbocharged port engine would have been deafening and effectively have killed any small talk. Eddies of nauseating exhaust would have swirled around the cabin through the open doorway. The wavetops would have glinted in the wan winter sunlight 12 000 ft below.

An hour later, at about 90 nautical miles (166 km) offshore – when the desert coast they had left behind would just have been visible on the horizon – Kriel would have told Theron over his headset that the time had come. Holding himself steady, Theron would have unbuckled his seatbelt, and laboriously wrestled the naked men one by one out the doorway. And then they would be gone forever, vanished into the howling of the engines, plummeting through the air like two black gannets diving towards the ocean far below.

Theron had done his research: he’d previously visited the SADF’s Silvermine naval intelligence station, buried in underground bunkers in the mountains above Tokai in the Cape to ascertain precisely how the icy, Antarctic-spawned Benguela Current ran north-northwest up the Skeleton Coast and how this interacted with the winds that swept the whitecaps.

‘I made inquiries with Silvermine at the Air Force/Fleet Operations Room that has to do with the traffic of ships at the southern tip of Africa. They had simulators on their computer to watch if something falls in the sea in which direction it would go . . . I asked if there was a package more or less the weight of the average man that fell into the sea 100 nautical miles [out], where would he wash up, and most of them there said the chances of him reaching land was nil. They didn’t know what it was all about.’

This research was crucial to his plan of eliminating all traces of D40’s airborne disappearances, as in December 1977 and early 1978, unseasonal storms off Argentina had seen scores of bodies of those ‘disappeared’ by the military junta washed ashore. Theron had resolved that this would never happen with his own victims, so he had determined the best area to do the death drops well in advance.

An hour after making the drops, Kriel would have landed the Piper at the beach. He and Theron would have exhumed the door and reinstalled it, then burned the victims’ clothing with a little aviation fuel before taking off again and heading back to Eros Airport outside Windhoek.  The two Special Forces officers were grimly satisfied: D40 would be able to dispose effectively of those PLAN guerrillas whom Military Intelligence were unable to turn into askaris and interpreters.