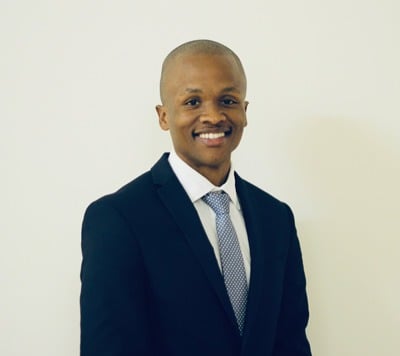 Hloni Bookholane completed his medical degree at the University of Cape Town. He was awarded a Fulbright Scholarship to pursue a Master of Public Health at the Johns Hopkins Bloomberg School of Public Health in the US. He is passionate about medicine with a specific focus on organ­donation and transplantation policy. 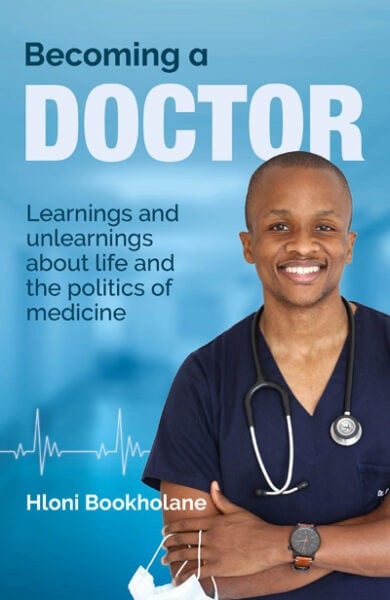 Becoming a Doctor: Learnings and unlearnings about life and the politics of medicine
Hloni Bookholane
Tafelberg
ISBN: 9780624089247

Join Hloni Bookholane on his journey of becoming a doctor: from student to intern at the world-famous Groote Schuur Hospital in Cape Town to the best school of public health in the world across the Atlantic, and back home amid the COVID-19 pandemic. There are highs and lows – learnings and unlearnings – about the personal versus political as he discovers how government policy, socioeconomics and more influence disease and medicine.

On breaking the news of a patient’s death to the family:

Breaking bad news is something we learn in medical school, some better than others. We are taught about it a lot in first and second year, and then periodically throughout the remaining years. It’s almost like a pension fund payout: a lump sum at first and then equal amounts each year following that. I imagine medical students (and I include myself in this plural) would memorise the criteria and then tick off each step mentally when breaking bad news to the simulated patient in their objective structured clinical examination (OSCE). The first time I broke bad news to a real, live family it went horribly. If it were an OSCE station, I would have failed.

The day before I had to do this, a patient, who was being managed by our firm, had died and the one of the doctors of the firm, usually the intern, needed to go and speak to the family. The registrar – the specialist in training, aka resident, asked if I had done this before and I told him that I hadn’t so he said, "Okay, let’s go together." He had already told me that there are three things you need to express whenever you break bad news, especially when informing a family of the death of their loved one: the truth, empathy and the irreversibility of the cause of death. In medicine, things come in threes, they say. Before going into the family room, we made a quick check to make sure it was the right patient and that we had the right folder to make notes in. It would be awkward to certify an alive-and-well patient and then scratch that out (because you cannot throw away the page altogether, for medico-legal reasons). The registrar broke the bad news and within minutes we were walking out, not without any reassuring thank yous from the family and expressions of understanding of the condition that had progressed

The next day, I was on my first call as a doctor and, with excitement about answering my phone to hear someone on the other end say, "Hello Dr Bookholane …", I was summoned to the ward to certify a patient who had passed away and told that I would have to speak to the family. I would have to break the bad news. If you have ever been to Groote Schuur Hospital, you’ll know it’s big. It was just before visiting hours and it was pretty busy and the lifts were taking aeons so I decided to take the stairs. I was going over what I was going to say, how I was going to say it, when I was going to use some non-verbal communication. But by the time I reached the ward I realised that I didn’t even know the patient. Shit. The one time (among all the others) you hope you can read another. doctor’s handwriting, it’s when you’re on call, a patient’s condition has changed and you need to do something. I read the notes. The patient had been admitted for a few weeks and their condition had been getting worse in spite of all medical interventions. The nurses told me the family was aware of the patient’s condition and the poor prognosis it carried. This shouldn’t be very difficult, I thought. I went into the family room and it was full. I was thrown a bit as the family the day before had only comprised two people. There were about six or seven family members before me and I introduced myself, explained that I was the doctor on call and not the doctor who had been looking after their loved one, and stated that the reason I had been called is because that’s what happens after hours. The team on call is tasked with looking after the whole medical ward.

I took a seat and briefly asked how all of them were related to the patient – the patient was their parent. I tried to establish how much they knew of the situation so I could start from there. It was going swimmingly until I went from, "Their condition was irreversible, they were deteriorating each day because of how sick they were,’ to ‘and they unfortunately passed away."

One of the children (these were adults, by the way, parents themselves) shouted: "What? What do you mean they passed away? How can you just say it like that?! No, man!"

With hindsight, but also in that moment, I realised that I had stuffed up royally. I thought the family knew why they had been called to the hospital and that they knew their loved one had passed away, and I was there merely to give more details about what had happened. This was when I learnt that what actually happens when a patient’s condition changes or deteriorates (and it doesn’t have to be that they die) is that the family is not given the details on the phone. The family is called to come to the hospital with nothing more than, "Please come to hospital. There has been a change in the patient’s condition." But yes, I still stuffed up. I should have primed them that what they were about to hear was not good news. There I was, a freshly minted graduate, delivering the worst news about a loved one in a subpar way. I was deflated for the rest of the call. The only solace for the night was the consultant and registrar saying that I would learn from that experience, I would not make that mistake again and that it was okay – a simulated exam scenario and the real thing are very different.

Sure enough, I never made that mistake again. My ability to deliver bad news got better. I know this because of the reactions I would get from patients and how the breaking of the bad news evolved into conversations with the families and would end in them hushing me away to go back to work. However, it didn’t ever get easier. I could do it better but it wasn’t easy and, to be honest, I hated getting calls to go to speak with families. It was emotionally draining. Twenty-seven-year-old me telling families made up of adults the same age as my parents, and sometimes older, seeing their hearts break and seeing them cry? Yoh, it was a lot. So much so that sometimes the tears would well up in my eyes as I walked out and left the family to see their loved one.