Fasten your seatbelts as the countdown begins to the first Mother City Comedy Festival. This new annual festival takes place at the Baxter Studio Theatre from 19 to 31 March. 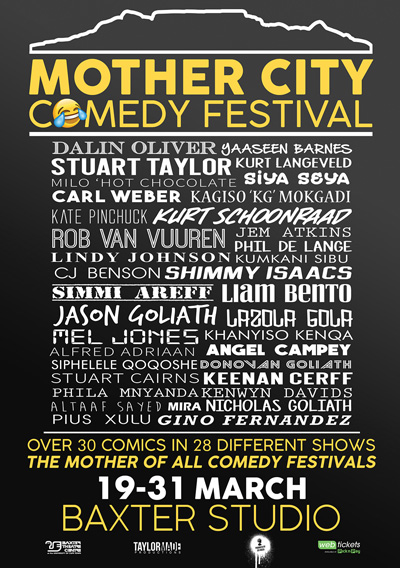 Celebrating stand-up comedy and the artists who present them, the Mother City Comedy Festival showcases a full spectrum of different comedic styles.

With two shows daily, the Mother City Comedy Festival promises to get audiences up close and personal with their favourite comedians while introducing them to some of the country’s most exciting upcoming talents. Comedy-lovers will be spoilt for choice during this inaugural festival of funniness, produced by SIV NGESI , in collaboration with Taylor Made Productions.

“The local stand-up comedy circuit has grown at a rapid rate, which has given rise to some hilarious household names, as well as stars of film and television. A host of local stars will present new work at the festival, along with one (or two) surprise international artists,” says co-producer Siv Ngesi. “Audiences have the chance to feast on ensemble shows, two-handers and solo offerings, ensured to cater for all comedy tastes.”

“This is a truly a festival for comedy connoisseurs, focusing on stand-up comedy only and celebrating all the different styles within that genre,” says co-producer Stuart Taylor. “We will present predominately South African artists while providing newer artists with the platform to perform their work at a mainstream venue, something which is often costly for them to do.”

Tickets cost from R120 to R150. Bookings can be made at Webtickets www.webtickets.co.za or selected Pick n Pay stores.

For discounted school or group block bookings, fundraisers or charities contact Sharon Ward on 021 680 3962 or email sharon.ward@uct.ac.za or Carmen Kearns on 021 680 3993 or email her at carmen.kearns@uct.ac.za.

Join the conversation at:

The line up for the Mother City Comedy Festival is: 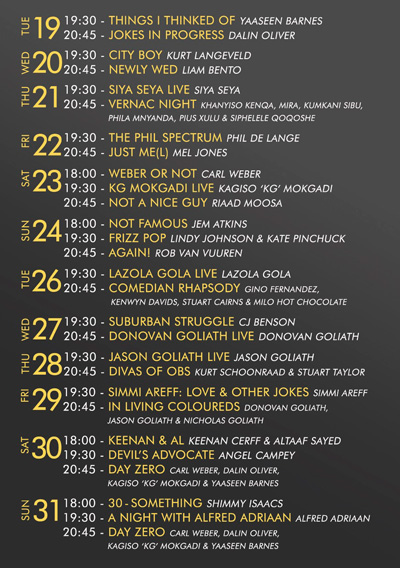