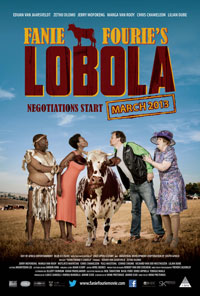 In a nutshell
Afrikaner laaitie falls in love with Zulu girl. Their families are unimpressed.

Acting
FFL made a good start by casting all the actors for, let’s say, their acting ability, and not for their Facebook debates or (questionable) singing talent. Chris Chameleon actually stands out, not for his crazy wig, but for his perfect portrayal of a cheesy, narcissistic Afrikaans doef-doef music star. He does sleazy real easy.

Styling
The Afrikaner “antie” wears knee-highs, the township sofa is covered in plastic, and from there it just gets better.

Script
The script, a mixture of Afrikaans, English and Zulu, flows comfortably. The dialogue is precise, clear and never unnecessary. The one-liners are cool and so South African it left me with an unexpected warm and fuzzy feeling.

At Sarel Fourie’s all white wedding shoot for Huisgenoot he phones the photographer from the balcony and asks him to cut out, ahem, the “dark pixel”, meaning Dinky, of course.

Later at the all white, all stiff wedding reception Dinky jumps up and asks, “Who is going to teach me to sokkie?”.

Camera work
FFL is not Wolwedans in die Skemer when it comes to cinematography, but for a romcom they outdid themselves with beautiful lighting, abstract close-ups (the cake in the oven) and even a few long, art-house kinda shots.

Soundtrack
The soundtrack is awesome! Yes, Freshlyground and Radio Kalahari Orkes are there, but Jack Parow dominates. It is almost as if his music was written for this film - it contains English, Afrikaans, a diverse set of cultural references and it’s cool!

Characters
I loved both Dinky (Zethu Dlomo) and Fanie (Eduan van Jaarsveld). Fanie is sweet and a bit daft at times, but definitely not dumb. He has really good manners/intent and calls everyone Oom or Chief. (Not always at the right moment, though.) The beautiful Zethu Dlomo shines as the spunky and sincere Dinky Magubane. She wants more out of life, but realises that her goals might not be what other people want. As per usual, Jerry Mofokeng and Marga van Rooy add some dramatic depth to the cast.

Cultural difference
FFL pokes fun at our cultural differences, and at how little we know about the different cultures in our country, but it does so with respect, without an accusatory tone. 10 out of 10 just for that! It goes beyond poking fun. It asks questions around racism, patriarchy and sexism and even goes so far as to suggest we should give the younger generation some room to start their own traditions.

Dinky’s dad is very patriarchal and set on African traditions, whereas Fanie’s mom is racist and judgmental. FFL treats both characters with respect – it shows the demons they are fighting, their progress and somewhat reluctant growth.

Outstanding scenes
Picture this: Fanie is at the wheel of his pimped-up ride, beautiful Dinky is in the passenger side and some township laaities are in the back. They are driving through the township with the windows down, singing along to Jack Parow’s “Cooler as ekke”. Beautiful.

Now picture this: they pull over on a dusty field, next to a shebeen, still singing “Cooler as ekke”. Fanie takes Dinky is his arms and teaches her to sokkie! They then kiss – and it is a real kiss, not two actors trying to not embarrass themselves! Hallelujah!

Okay, one last groundbreaking scene, then I’m done. They come back from a game. They are both “spray-painted” from head to toe in green and gold and dressed up in superhero gear. Fanie is dark green. Dinky is yellow/gold. They wash each other in the gentlest manner. It all, of course, leads to sex.

Conclusion
Fanie Fourie’s Lobola is a heart-warmingly sincere comedy with real depth and even something to say.