Raymond Danowski (permission for the publication given by Sandra Olivier-Danowski)

Delivered at the wake at Raymond’s home in Stellenbosch on Friday 9 February 2018. Present: friends and members of his family, including daughter Jane, sons Gus and Henry, and his surviving spouse Sandra Olivier-Danowski, and their families.

Raymond Danowski was born in Manhattan, New York, on 12 September 1943. The books on the shelves were high up, which meant the little boy had to satisfy himself with reading the words on the books’ spines to see what was there. But then, gradually, as he was growing up, he had opportunities to get to love poetry and plays. For instance, his uncle acted in The raven by Poe, and this made Raymond start to love literature, plays and, above all, poetry. For example, the poems of WH Auden became among his favourites. This love for Auden came from the fact that when Raymond was a young person, an uncle was sending him typed copies of Auden’s poetry. The lucky strike came when his aunt secured him a job packing books on shelves at the Burgess-Carpenter Library at Columbia University, where he found peace and solitude in books. Not just the reading appealed to him, but also the holding – the tactile side to it.

Raymond was a universal person with a multitude of interests, living across several continents during the course of his lifetime. His great interest, especially in art and literature – and also music – saw his dreams realised in collections and benefaction for art, literature and music – but especially art and literature. His strong love of art saw him become a very successful art dealer, with an expert knowledge of Renaissance art and prints.

In whatever work Raymond involved himself, there was always his deep social and civic conscience. For instance, while residing in Stellenbosch, the town he loved so much, he once went to a local store and bought up all the food vouchers, distributing them to street persons whom he encountered along the way. It led to the day’s fresh food stock being virtually depleted. He had a spirit of giving that was truly amazing.

However, the world will probably mostly remember Raymond as a book person, one who loved books and wanted to share the reading experience with others. It is as a result of Raymond’s own personal and deep interest in literature and books that I was greatly honoured, fortunate and lucky to know him. I first met Raymond at the opening of the Diocesan College Library wing on 21 August 1992 – today the Danowski Wing of the HA Molteno Library. Present there were his two boys: Gus, a boy at Bishops Prep, and Henry, still too young to be at school. It was an honour to know Raymond for these 25 years. It was truly a blessing to be able to visit Raymond last month, but sad to see him suffering from a life-threatening disease. And now, sadly, I will no longer be able to pick up the phone and run something by him, like, “What do you think about …?” And then, there would be the normal lengthy in-depth, yet perfectly simple, answer to what could have remained an almost unsolvable problem.

What did I learn from Raymond? It was in the gaps that Raymond saw what he saw. For instance, in the mid ’70s, as he was putting together his collection of 20th-century English poetry, and as book after book came to the farm in Hertfordshire where he was living at the time, he began shelving the whole collection in a barn, and it was there that he realised what was missing, and he said, “It was all links and gaps ... I realised I had nothing, just a drop in a bucket.” From this initial stage, today the final product amounts to what is now known as the Danowski Poetry Library, a 75 000-volume collection of rare and first editions of modern and contemporary poetry at Emory University. It includes every poetry volume in English published worldwide in the 20th century. In addition, there are 50 000 literary journals and several thousand broadsides, recordings, newspaper articles and manuscripts, among other artefacts. The whole escapade took 30 years from when Danowski started with the collection, until it was finally donated to Emory in 2004. Today, it is a living library with additions and new acquisitions added. See http://danowski.library.emory.edu/. More specifically, visit the Rose Library at Emory, where the collection is: http://rose.library.emory.edu/about/contact.php. The collection is said to be the largest of its kind in the world today. 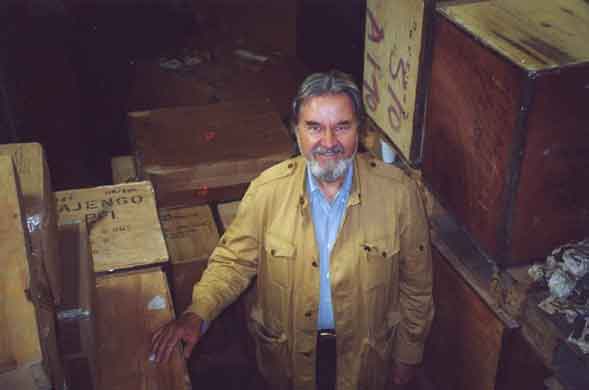 Closer to home, Raymond will also be remembered for his generosity in endowing so many institutions in South Africa – schools and universities – with books for libraries. He sponsored music recitals and put students – including those from disadvantaged backgrounds – through school and university. And the sending of books to persons that he knew, was a wonderful thing for someone to do. He sent me a collection of the philosophy of history that led to my thesis on Etienne van Heerden’s novels. And more books that led to a DPhil on Leipoldt. For this, I will always be grateful to Raymond. Not just the books, but also discussions on the relevant topics! And a wonderful friendship over the years.

In closing, I thought it would be apt to read a few lines, in this case, from Van Wyk Louw – “Winterbome”, one of Raymond’s favourites – about unconditional and universal love, which speaks to all of us today:

Langs baie weë gaan my smart,
blind is my oë en verward,
is alle dinge in my hart.

I will finish with my own attempt to translate the verse, and with Raymond’s voice right here saying, “Leave it to a person of the mother tongue to translate” – and, of course, he was right; but, I’ll try nevertheless for the purpose of those who might not know Afrikaans:

The thought of you, of you alone,
engrained on my mind
as shadows under trees
left behind
just you, just you.

Along so many paths, my woes
in my heart, blinded
to all things, and confused.

But this one thing – always
one thing and on its own
grounded and deep rooted – its relief
though naked in me, through a winter’s day
this love, this love.

Requiescat in pace, Raymond Danowski. Danowski is survived by six children and his wife, Sandra Olivier-Danowski.