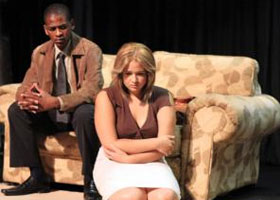 For those who would like an alternative to the South Africa-England rugby test at 17:00 on Saturday 16 June, Mike van Graan’s award-winning, fast-paced political thriller - Green Man Flashing – by Mike van Graan, will take place at the Artscape Arena Theatre at that time!

As an additional incentive, for every three tickets bought for this particular show (R65 each), a fourth ticket will be free i.e. four tickets for the price of three!  This special is only available via Artscape’s Box Office at 021-4217695.

Green Man Flashing is set six weeks before South Africa’s second elections in 1999. Gabby Anderson, a white personal assistant, alleges she has been raped by her boss, a black, high-profile government minister from KwaZulu Natal, with an impeccable anti-apartheid struggle record.  Should the allegations go public, there will be major repercussions for the ruling party who send a two-person – good cop, bad cop – delegation to convince Gabby not to go through with the charges.  The delegation includes Gabby’s former husband, Aaron Matshoba, now the ruling party’s major trouble-shooter, and Luthando Nyaka, the quintessential “bad cop”.

Green Man Flashing juxtaposes individual human rights against the greater collective good and pits the potential for political violence against the pandemic of violence against women through a very human story that gives truth to the mantra “the personal is political”.  The play tackles deeply moral and political questions in a changing society that – as the recent controversy caused by Brett Murray’s painting The Spear  has shown - continues to struggle with morality: what is good, what is bad, what is right, what is wrong?.   In a remarkable instance of life imitating art, the events depicted in the play (written in 2003) were to become real-life drama when Jacob Zuma, then Deputy President of the ANC (and upon whom the key figure in the drama was based), was charged with rape.

This is the second of three Van Graan works to be staged by Artscape this year with Brothers in Blood having played to sold-out houses in April, and Just Business, a satire on post-1994 greed and corruption, heading to the Arena from 16-28 July.

What the Critics Said

Van Graan is set to lead a new brand of politically active theatre in South Africa. … It will undoubtedly emerge as one of the finest plays of this year’s fringe. – Anton Krueger, Cue, 2004

Van Graan shows again why he has been such a thorn in the flesh as a cultural activist for the new elite in the last few years. – Gabriel Bothma, Die Burger, 2004

It tears at the heart and soul of our democracy, and rips at the underbelly of corruption and political power through its astute writing –Adrienne Sichel, Star Tonight, 2004

It’s got its finger firmly on the pulse of the precariousness of our democracy and the distance between politicians and the increasingly marginalised public. – Peter Tromp, Cape Times, 2004

It will in time be recognised for the ground-breaking work it is. – Brent Meersman, Mail and Guardian, 2005

Many contemporary plays grapple with the heart and mind of conflict and post-conflict life, with all its contradictions, but Green Man Flashing carries a high-voltage current that touches the nerve ends. – Nadine Gordimer, Nobel Literature Laureate

Green Man Flashing brilliantly lays bare the difficult paradoxes South Africans have to confront in achieving the real promise of our inspiring constitution: our ability to live it. – Prof Njabulo Ndebele, then Vice Chancellor, University of Cape Town

The play will also run at the National Arts Festival in Grahamstown from 2 to 7 July and at the Vryfees in Bloemfontein from 11 to 13 July 2012.