“Eish – this lockdown!” Research about teenagers’ experiences during the lockdown

South Africa, like many parts of the world, is currently still caught in a lockdown as a result of the COVID-19 pandemic. The lockdown – which the author categorised as a disaster – influences the economy, relationships and civil society at large. It also affects teenagers. The purpose of this research was to find out how teenagers are experiencing the lockdown.

The theoretical basis for the research was drawn from three theories. The ecological model of Bronfenbrenner (1979) provides a base for the interactions between an individual and his/her environment (Härkönen 2007). Certain factors, e.g. violence or the low socio-economic status of children can hamper their development, while positive aspects in the environment can improve wellbeing (Tupuola, Cattell and Stansfeld 2008). The second theory is the social space and ethical action theory (Van der Walt and Wolhuter 2018) which, in brief, postulates that every individual functions in a “cosmic framework” of interactions, but that these interactions are also informed by an ethical-moral element which, in the context of this research, also means that teenagers must act morally. Thirdly, resilience theories may give some clarity on the ways in which individuals act during disasters. These theories refer to an individual’s ability to successfully manage the negative impact of trauma and to avoid the negativity attached to risks.

Disasters have dire consequences. Not only are disasters “shockingly lethal” (Bonanno et al. 2010), but they also influence the economy and relationships. As nearly half of all disaster victims are usually, or frequently, children, disasters also affect teenagers. Consequences for teenagers include anxiety, stress, depression, sleep disorders, disorientation and post- traumatic stress disorder, while provisional research also indicates an increase in substance abuse (cf. Speier 2000; Bonanno et al. 2010). Disasters also affect education. These consequences include displacement, physical damages, financial constraints, children who prefer to enter the labour market rather than go back to school, an increase in grade failures and the emotional impact of death. However, except for newspaper articles by Gaur (2020a and 2020b) and Jasevičiūtė (2020), little has been published about the impact of the lockdown on teenagers and their education. This research provides some insights into the impact of and teenagers’ views on the lockdown.

Although people react differently to a disaster, most will overcome the negativity due to their resilience. Previous research indicated different extreme situations where people survived and the characteristics necessary for survival. These include life in Polar regions, in a submarine, and in natural disasters like Hurricane Katrina and the 2005 floods in Mumbai. Research findings indicate that survival is dependent on both personal traits (e.g. humour, social interaction and venting of emotions) and the environment and social relationships. With regard to teenagers, good relationships with parents and peers, the ability to solve problems and commitment are protective factors. These and other characteristics of resilience enabled teenagers to overcome negative socio-economic circumstances, to live away from a parent and to survive natural disasters in Canada, Taiwan and Thailand. However, not much research has been done on teenagers’ reaction during the lockdown which was the focus of this study.

A qualitative phenomenological study was completed to discover how teenagers were feeling during the lockdown. A request to participate and questionnaire were sent via WhatsApp to potential participants, who were chosen through convenience sampling. The teenage participants were mostly from rural North-West, and included learners from ten different schools. The questionnaire requested biographical information and included open questions about the participants’ current emotions and fears, their views on the atmosphere in their environments and the effect of the lockdown on education. Sixteen participants – fourteen teenagers and two adults – participated in the research. No interviews were conducted. Instead, both the questions and answers were routed via WhatsApp, with the exception of one participant who used e-mail. Participants either wrote their answers and sent images or answered directly as WhatsApp messages. Ethical considerations, including consent by teenagers and parents, privacy and beneficence were duly observed. The two adults were included as there is a congruence between their responses and those of the teenagers.

When asked to state three emotions, participants indicated four groups of emotions. The majority indicated that they were sad. Other emotions included anxiety, aggression/frustration and joy. The findings differ from those of previous research, which indicated that fear/anxiety was the most prevalent emotion. The reference to aggression/frustration and the percentage of participants (38%) who referred to joy despite the circumstances, were also not reflected in previous studies.

Participants were requested to state three fears. Six fears were indicated: education, the economy, the virus, starvation, uncertainty, and the role of the security services. Regarding education, 81% of the participants were anxious about education. Some of the fears were that they would fail the year, that there would not be enough time to catch up all the work, that the schools would not open again in 2020 and that there would be too much pressure on learners once the schools reopened. Their responses about the effect of the lockdown on education included time lost and dropping marks, but also that there were learners who did not have access to the internet or social media, and were thus unable to study during the lockdown.

With regard to relationships the participants were ambivalent. Some were of the opinion that relationships, especially with parents, improved. Others referred to the stress and depression caused by remoteness, and on the other hand, the frustration of being in one another’s presence all the time.

The lockdown had various consequences for the participants’ communities. Seven themes were evident. The effect of the lockdown on the economy was referred to by seven participants. Four referred to the current unemployment of their parents, while the frustration in the community, as well as the “poverty, social and psychological pressure” on the informal sector were also mentioned. Participants further mentioned the relative quietness of their communities and some were of the opinion that crime had decreased. Other themes included the plight of street children, the positive effect of the prohibition on the sale of alcohol, and the fact that some people were not obeying the lockdown regulations. An interesting theme was the effect of the lockdown on funerals. A participant noted that the lockdown made it impossible to “attend to and support the late/dead person”, which indicates the importance of funerals in some communities.

On the positive side, all the participants were able to give at least one advantage of the lockdown. These included more time available for personal and family time, that the lockdown had a negative impact on the coronavirus, fewer accidents and less alcohol abuse, “resting time” for the earth, and money saved due to retailers’ being closed.

The participants’ responses indicated several aspects of resilience. More than 90% indicated that they are always happy, or happy most of the time. Two-fifths indicated “joy” as an emotion they felt during the lockdown. Participants used the lockdown as study time and were able to articulate their fears. It seems that despite the social distancing, the participants did not feel lonely. Finally, the participants showed a sense of the future by indicating that the government should plan for future disasters.

As the research was done during the lockdown, there were some limitations, including the relatively small number of participants and the absence of interviews. However, the results confirmed findings in previous research and also provided novel insights on the views of teenagers during the lockdown. It can therefore serve as preliminary research on the effects and consequences of the lockdown for teenagers.

The article concludes with recommendations, including the necessity for further research and post-pandemic research. 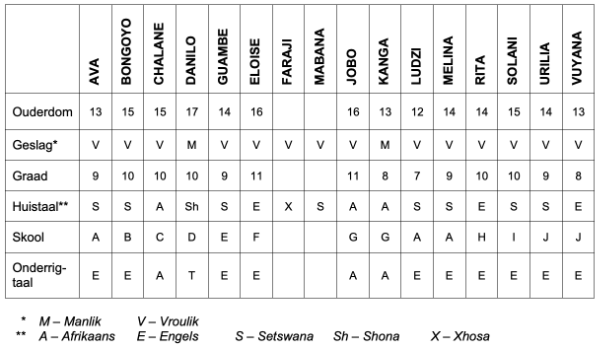 Nie al die deelnemers was egter negatief nie. Solani (15) dui aan dat sommige leerders, soos sy, wel oor internetgeriewe beskik en daarom in staat is om by te bly. Vir Jobo (16) is selfdissipline nou belangrik, ’n houding wat Melina (14) met haar deel: “[W]e can always learn by ourselves. We can and should work hard, study, read and do all the work we were supposed to be doing at school.”

Nie al die deelnemers is so positief nie. Mabana is amper filosofies in haar benadering: “Break up for some and reunion for others”, terwyl Ava (13) te bang is om iets oor verhoudings te sê, want “there are married couples staying together and cohabitating”. Melina (14) is egter meer uitgesproke hieroor: “[P]artners cannot be intimate as is expected due distance and long period of being apart.”

Sewe deelnemers verwys na hoe stil dit tans in hulle buurte is. Solani (15) beskryf die stilte só: “The streets are yet so quiet and lackluster. It is as if there is no life and that we live in a post-apocalyptic world where the struggle for survival is more desperate than ever.”

I think lockdown is good. The world never rest[s] and people never rest and now we are forced to rest. (Kanga, 13, s)

Lockdown should set as an example of good hygiene to our countries, and how we should look after each other as citizens. (Solani, 15)

If there was ever a time to dare, to make a difference, to embark on something worth doing IT IS NOW.

—. 2020b. Lockdown diary of a teenager: How coronavirus is making us appreciate the lives of our grandparents. DailyO, 7 April. https://www.dailyo.in/ variety/covid-19-lockdown-in-india-lockdown-elderly/story/1/32676.html (13 April 2020 geraadpleeg).

Jasevičiūtė, A. 2020. Teenage girl from Wuhan shares how dramatically her life has changed during the coronavirus outbreak. Boredpanda. https://www.boredpanda.com/diary-girl-wuhan-coronavirus (13 April 2020 geraadpleeg).