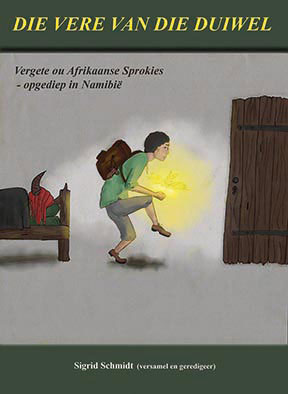 Once upon a time, before Walt Disney was born, life was different. People told folklore tales around the campfire. Sigrid Schmidt tells about the birth of her book Die vere van die duiwel.

Hi Sigrid! Thank you for taking the time to answer my questions. Please tell our readers about yourself.

I am a folklorist and live in Hildesheim, a city of 100 000 inhabitants near Hannover. I studied English and German at the Free University Berlin with special interest in folklore. Right after my PhD examination I married and, as my husband worked as a hydraulic engineer, spent the first years of my married life in the then South West Africa, now Namibia, mainly on the Hardap Dam construction site (1959–1962). After our return to Germany I went back eight times to collect folklore.

Right from the beginning I tried to combine the collection of stories with theoretical studies. I remember well my conflict when, via interlibrary loan, a manuscript PhD thesis from Pretoria had arrived just before my second child was to be born and the manuscript had to be returned soon. So while lying in the little missionary hospital at Mariental I eagerly tried to read the thesis, hoping all the time that no visitors would come and interrupt me, for I knew that back home with the baby there would be no time for stories. By the way, this thesis from Pretoria became one of the main sources for my first scientific publications.

Where did you learn to speak Afrikaans and why?

When you live among black and white Afrikaans-speaking people for years you certainly pick it up soon. It was easy for me because I knew some Dutch and, in addition, come from Northern Germany, where I heard Low German spoken during my childhood.

Your introduction in Die vere van die duiwel is fascinating. 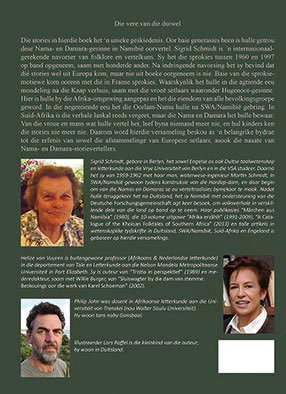 Please let me have your thoughts on the origin of the stories.

Each story has its own history. Folklorists of today do not try any more to reconstruct the origin, because this is based on too much speculation. We can try to trace stories back, and handbooks help us to do so. Many stories were documented in the 19th century for the first time, but might have lived before for centuries. Others have a complicated history and might have been based on oral traditions, then published in books, retold orally - and again used literally, for instance stories from Thousand and One Nights. We, too, have to distinguish whole stories from parts of stories, either sections or certain motifs which are combined in various ways. So the beginning of Hansel and Gretel, when the children are abandoned by their parents, was already in a story by Basile in 17th-century Naples but Basile’s story then goes on in a very different form from that of the Grimm text.

Helize van Vuuren is known for her research on the San people – again we go back to the roots of an ancient civilisation. How did she become involved with the project?

Though I collected tales mainly from Nama and Damara in Namibia, my field of research comprises all of southern African folklore, therefore I included the San (Bushmen) right from the beginning of my work. Because of my connections with San researchers I came into contact with Helize van Vuuren and asked her whether she could name me a person who might revise my Afrikaans edition. She was fascinated by the tales and wrote that she would do the revision herself.

And how about Philip John? What was his role?

I wrote the Introduction and notes in English. He was so kind as to translate these parts into Afrikaans and to proofread the various forms of the whole manuscript again and again.

Fairy tales from long ago were far removed from Walt Disney. Children grew up in a different time, where death and disease were part of daily life. But do you think this book, with its tales, is meant for modern children?

When storytelling was still alive in the old days, all of the family sat together, especially after the evening meal, and stories were told for all. Thus the stories I recorded were addressed to the whole family. For Western nurseries there might be a few places which might not be fit for young ears. But what do present youngsters eagerly absorb of TV programmes?

Where and how did you hear all the stories?

I went around many different places in Namibia with my tape-recorder, like a pedlar, and asked people for stories they had learned orally. So I recorded most of the stories in the homes of the informants. If the stories were told in Nama I had to ask someone to help with the translation, as my Nama is too scanty to grasp the full meaning. I transcribed the Afrikaans texts myself word for word when I was back in Germany. Practically none of my stories had been recorded before in Namibia.

What was your aim in putting this book together?

A folktale might be known in many parts of the world, like Cinderella. But when it is handed on orally over time and distance it is adapted to the geographical, cultural and social conditions where it is told. And the narrator then gives it his personal touch. I compare it to a dress: the material is common on many continents, the pattern is of the regional fashion, and the narrator adds his personal ribbons, lace or buttons.

The fascination of this collection is that the tales have kept the original European stories in an astonishing way, even an incredible number of phrases and details. At the same time, over 200 and more years, they have been adapted to African surroundings. The king of the fairy tale is depicted like a white farmer, but there are no woods, only the veld.

Readers usually know folktales only from books. The actual oral tradition in Europe is much, much closer to the Namibian tales. The style of oral performances avoids depictions of places, persons and, first of all, of feelings. A narrator brings in only what is absolutely necessary for the understanding of the text. There are practically no adjectives; the verb “say“ is used for all kinds of utterances, the structure of sentences is very simple and straight. This, as I said, is typical for oral performances in Europe as well as in Africa. When my narrators were not fluent in Afrikaans this was even stronger. The Western reader is used to the embellished texts in the books (the Grimms embellished their texts, too!). I tried to make a compromise: to keep to the original text as far as possible, but polish so far as to make it easily readable. My first aim: the story should move the reader as a fairy tale in the same way I was moved when I was listening to it. 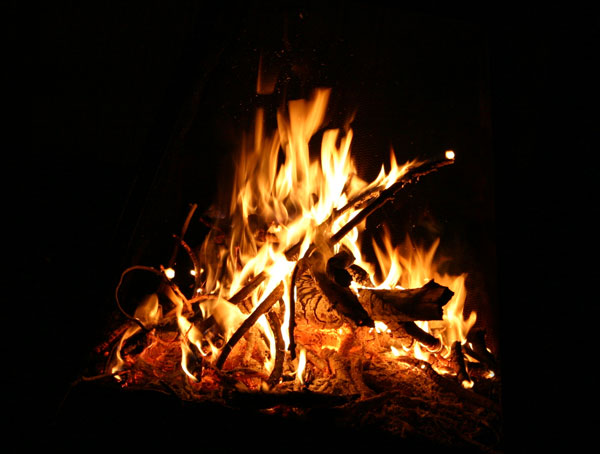 For somebody interested in language, culture, history and folklore, this can only be a gem. But for somebody who likes to read for entertainment, would you recommend the book?

Certainly I would recommend the book. As I mentioned above, I tried to keep to the original text as far as possible. This means: I reproduced only the words. Every narrator, however, uses gestures and facial expressions, alters his voice, pauses for effect. The reader should read the stories aloud – and best of all: retell them and add the missing expressions! Here in Germany I often tell these stories in public, at schools, in parishes, women’s clubs. The audiences particularly love “Langbeen, Verkyker en Seewaterdrinker“ when I tell it with corresponding excitement and speed.

What is your dream for this book?

That it may be well received and the stories will find their way back into the homes of the whites as well as the Namibians from which they originated but over the course of time have been forgotten.

Where can people buy this book and how much does it cost?

Information to order the book is available at this link. (The price is one hundred Namibian dollar. One Namibian dollar equals one South African rand.) 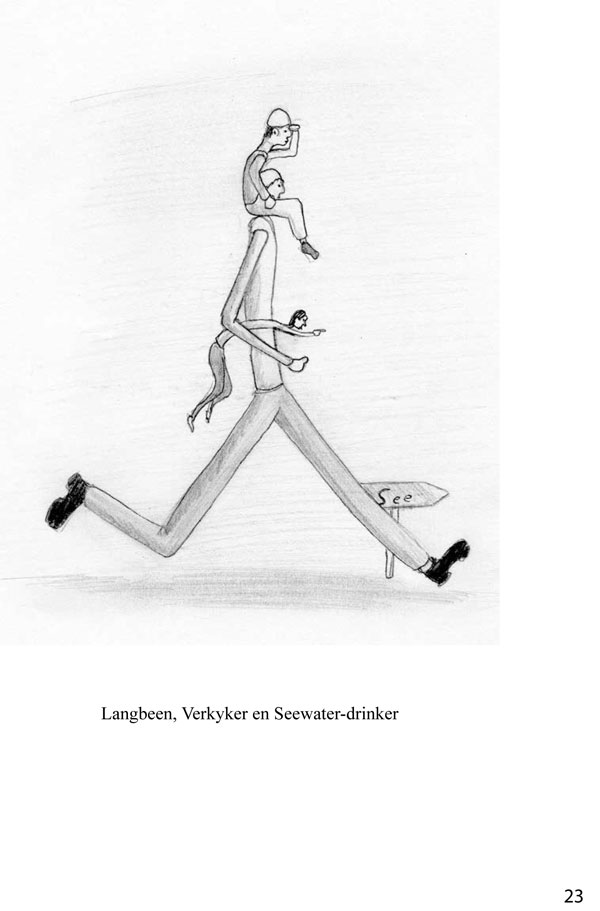 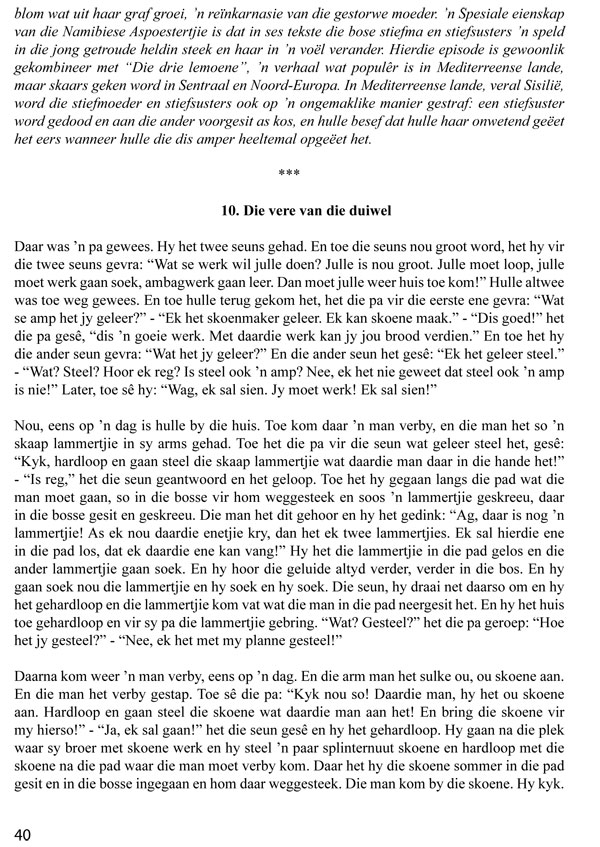