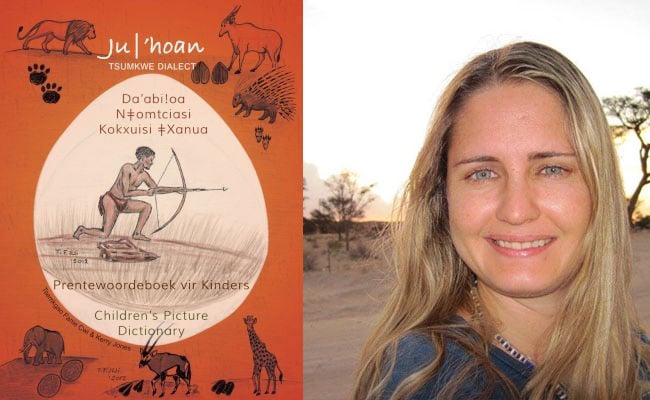 Kerry Jones is one of the compilers of the first picture dictionary of a San language. The other compiler was Tsemkgao Fanie Cwi. The book won the ATKV’s “Woordwystoekenning vir Woordeboeke en Taalgidse” award last year, and is called Die Ju / ’hoan Tsumkwe Dialect / Prentewoordeboek vir Kinders / Children’s Picture Dictionary (2014). It was published by UKZN Press. Kerry chats to Naomi Meyer.

Hi Kerry! Thank you for taking the time to answer these questions. You do research on the Ju|'hoan language – why?

No problem, thanks for the interest. Ju|'hoansi is an endangered language and is one of the most academically documented San languages. I am interested in bridging the gap between academic texts that serve academia primarily and providing user-friendly texts in Ju|'hoansi and other San languages to mother-tongue speakers. San people are the indigenous first peoples of southern Africa and we need to learn as much as we can from them about our history and our environment before it's too late.

How did you become interested in this unknown (to many people) language?

Through research and training I realised that the information and skills that I need to operate successfully in San communities is not available to me at South African universities and that I would need to learn these skills on site. I contacted an established female anthropologist who has over 40 years’ experience working with Ju|'hoansi, Megan Biesele. Thankfully, Megan agreed to my request to learn on site and I began shadowing her in field trips in Bushmanland Namibia. It was through Megan that I was introduced to key members of the Ju|'hoan community, and through this experience I began to network with other linguists and other San groups throughout southern Africa. 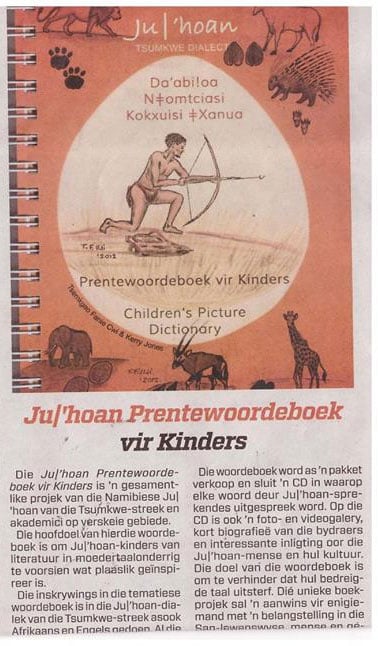 Press for the dictionary in a Namibian newspaper (photo: Facebook)

Why is it important to do research about such a small language? What about research regarding a language which is still "more alive"?

Research into our first people's languages is important for our national heritage. Encompassed in a language are indigenous knowledge systems about the environment, medicinal properties of plants, healing traditions, folklore, family systems, alternative philosophies, traditional skills in hunting, traditional music and instruments as well as local food production and preparation. Of course, there are languages in southern Africa that have larger speaking populations, and there are other linguists working on those. However, endangered languages are at high risk of disappearing forever and so we are racing against the clock to capture what we can before they are lost forever. 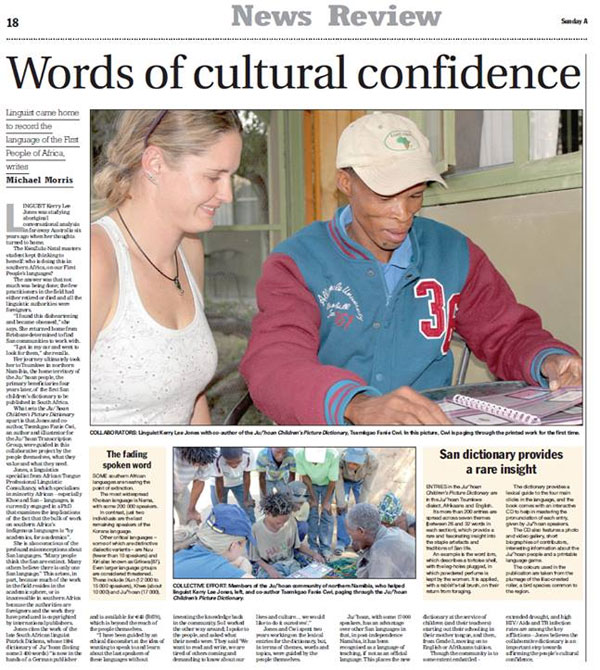 When does a language qualify as being "alive and well"? How can its speakers keep it alive and well or let it grow?

There are various scales and methods for measuring the "health" or vitality of a language. One of the easiest methods is to look at the number of mother-tongue speakers and inter-generational language transfer, ie is the language being transferred from one generation to the next or are the younger generations transferring to a different language? Below are two methods gauging language vitality.

The best way for a language to stay healthy is for it to continue to be transferred from generation to generation. From there the language needs to grow in various domains and be adaptable in literacy, media, education and trade. Political and economic power of a language also plays a significant role in the use or non-use of a language. 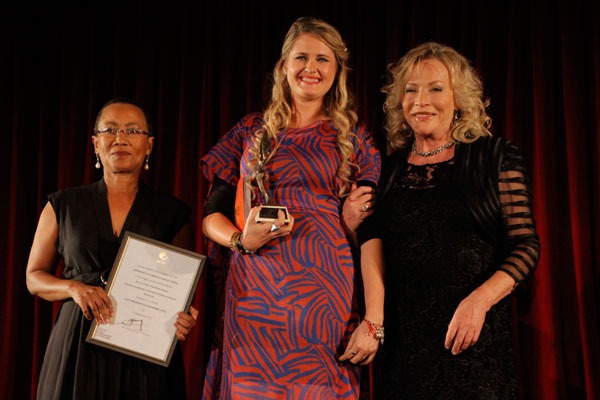 What can people from other languages in this country learn from the Ju|'hoan language?

What is the use of learning this language? Can you use it in any context in this country - and with whom can you communicate?

The dictionary is trilingual, so you are using Ju'|hoansi in collaboration with Afrikaans and English. Learning Ju|'hoansi can help you better understand our first peoples. It is closely related to another San language called !Xun which is spoken in South Africa by approximately 6 000 people in the Northern Cape area. So practically speaking, to speak Ju|'hoansi would be a useful tool to have should you want to collaborate with the South African !Xun at all. Leaning, at a basic level, about other languages in southern Africa is advantageous to South African students as this activity spreads awareness about the various ethnic groups that form the fabric of our history. We have many more groups of people and languages spoken than just our 11 official languages.

What did your study teach you about the speakers of this specific language?

Many, many things! That mother-tongue speakers are passionate about their language and about their culture. There are many things that we still don't know about San languages and culture. During the process of this project we discovered a new word for "meerkat" that had never been documented before in history.

Please share an interesting sentence from the Ju|'hoan language with our readers – and also how to pronounce it?

Hold your people, your language and your culture tightly together.

Please also share a video clip with our readers where they can listen to somebody speaking the language?

Below is a YouTube clip that I have loaded of our work. You can find lessons like this as well as printable pdfs to read along on the interactive CD that accompanies our dictionary.