A history of the UNESCO MAB Program in South Africa

The UNESCO Man and the Biosphere Program (MAB) originated in 1968 at the Biosphere Conference in Paris, France. The MAB Program promotes the establishment of biosphere reserves throughout all biogeographical regions of the world. In March 1995 the International Conference for Biosphere Reserves was convened by UNESCO in Seville, Spain. The tangible results of the Seville Conference were the Seville Strategy for Biosphere Reserves and The Statutory Framework of the World Network of Biosphere Reserves (UNESCO 1996). These instruments provide a common platform for the development of biosphere reserves, and define the principles, criteria and procedure for their designation (Robertson Vernhes 2007). They also establish the framework for governance of the World Network of Biosphere Reserves (WNBR) and provide for a periodic review of designated sites for every ten years of their existence. The WNBR is organised into a support structure of regional and subregional networks and currently consists of 610 biosphere reserves in 117 countries (UNESCO 2009a).

The essence of the biosphere reserve concept involves the combination of three functions within a specific landscape: conservation (of landscapes, ecosystems, species and genetic variation), development (fostering economic development which is ecologically and culturally sustainable) and logistic support (research, monitoring, education and training) (UNESCO 1996). These three functions support the notion of sustainable development as it is widely used today.

The MAB Program was introduced to South Africa in the early 1990s, coinciding with the country’s re-entering the international arena. The first biosphere reserve in South Africa was designated in 1998. The biosphere reserve concept is increasingly being considered as an option of expanding the system of protected areas by focusing on sustainable socio-ecological and economic development.

The historical events with regard to the implementation of UNESCO’s MAB Program in South Africa have never been officially documented. This paper looks at that history. It discusses the early introduction of the concept and its evolution throughout the past number of years towards becoming a more inclusive landscape management framework. It also provides a view of the future of the MAB Program in South Africa.

The first deliberations with regard to the MAB Program in South Africa started in the Western Cape in the early 1990s. South Africa was subsequently represented at the Seville Conference in Spain in 1995. Following further discussions the biosphere reserve concept was slowly introduced to the conservation institutions of the country. At present the concept is being used alongside other frameworks in different landscape initiatives as a tool with which to ensure sustainable development as an outcome of bioregional planning and as an instrument in the expansion of the national protected area system.

The year 1990 proved to be the start of major change in South Africa. On 11 February 1990 Nelson Mandela was released from 27 years in prison and the country was slowly starting to prepare for the first democratic elections that would take place in 1994. In 1990 the Chief Directorate of Nature and Environmental Conservation drafted a document on a potential holistic conservation strategy for the entire fynbos biome (Burgers, Fairall and Andrag 1990). Even that long ago the document emphasised the looming transformation and ultimate destruction of natural habitats that would result in a loss of environmental quality and a degraded quality of life. The involvement of local communities in conservation and development issues was being highlighted as being of critical importance. The UNESCO MAB Program was singled out as the most appropriate for a holistic approach to conservation (Burgers et al. 1990). This document by Burgers initiated wide deliberations with regard to the use of the MAB Program and the implementation of biosphere reserves.

From 26 to 28 April 1994 the first democratic elections took place in South Africa. This major event resulted in South Africa’s acceptance in the international arena, and the country embarked on liaising with a number of international conventions, the first of which were the Convention on Biological Diversity (CBD) and the World Heritage Convention of UNESCO, and subsequently South Africa was introduced to the MAB Program (Naude 2009). The Department of Environmental Affairs and Tourism became the line function department for the MAB Program and the World Heritage Convention.

The 3rd World Congress of Biosphere Reserves was held in Madrid, Spain in February 2008. The congress adopted the Madrid Action Plan (MAP), which plotted the future strategy of the MAB Program for 2008 to 2013. In response to the Madrid Action Plan, South Africa drafted a Position Paper for Biosphere Reserves that included a detailed list of actions to implement the MAP in a South African context (SA Biosphere Reserve Working Group 2008). That position paper states that the MAB Program could play a more prominent role in current government strategies relating to poverty alleviation, environmental sustainability, social upliftment, transformation and economic development. Within the South African context the biosphere reserve concept should be realised as a valuable land management tool with which to integrate people and the environment in a manner that supports the country’s natural and cultural conservation and sustainable development objectives, while improving human well-being. Thus the vision for South African biosphere reserves is stated as follows (South African Biosphere Reserve Working Group 2008): “South African Biospheres are special landscapes where socio-ecological land management is practiced towards a more sustainable future for all.”

Biosphere reserves truly are “special places for people and nature” (Bridgewater 2002; UNESCO 2002). The biosphere reserve concept is inclusive by nature, thereby addressing not only biodiversity conservation, but also the social, ecological and cultural aspects of a given region. Biosphere reserves offer models of “sustainable development in action”. At present the national government’s support to biosphere reserves in South Africa is still relatively inadequate.

Despite stern efforts by a group of biosphere reserve practitioners, the concept is still not well known and supported in the country. The biosphere reserve concept is very much in line with modern thinking of landscape management, because it seeks to balance ecological requirements with the economic needs of people living in these particular areas. For this reason it is potentially one of the greatest instruments to promote collaboration across administrative and political boundaries, especially in Sub-Saharan Africa, while demonstrating practical implementation of sustainable development.

The major value of implementing the biosphere reserve concept lies in its international alignment with UNESCO. Biosphere reserves foster collaborative thinking about the future management of a defined space. It promotes decentralisation of decision-making, while promoting collaboration and co-management practices between all stakeholders.

Biosphere reserves in South Africa are very well positioned to contribute towards social development within their specific domains and thereby address issues of local, regional and national importance. Over the more than 40 years of the MAB Program’s existence there has been continued global support and a greater worldwide interest in the establishment of biosphere reserves. South Africa should take cognisance of the international trend and recognise the potential of biosphere reserves in its national quest for sustainable development.

“How many times can a man turn his head and pretend that he just doesn’t see?” (Bob Dylan) 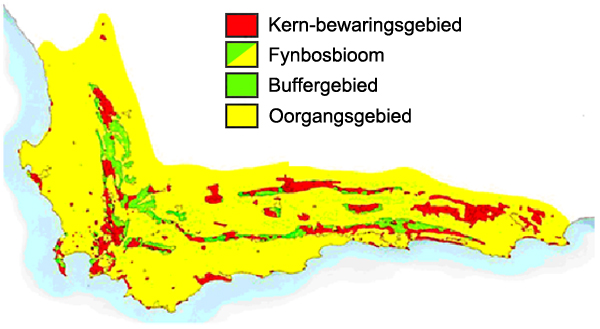 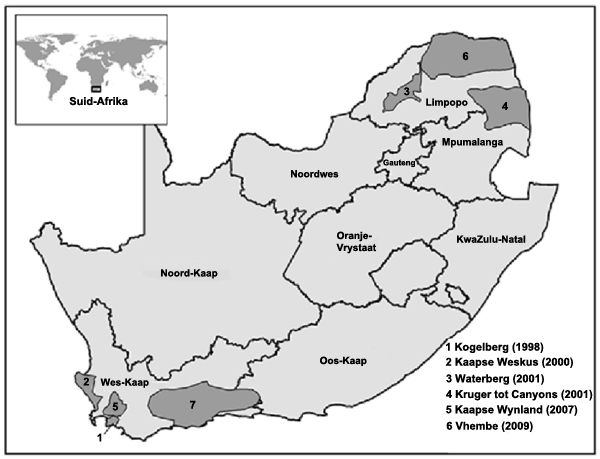 Canca, A. 2002. The application of bioregional planning methodology to promote sustainable development as applied by the Provincial Government of the Western Cape. Referaat gelewer by die Planning Africa 2002-konferensie, 18–20 September, Durban.

Joseph, G. 2008. A guideline for the formation and initiation of a biosphere reserve for the Klein Karoo. Ongepubliseerde verslag, Gouritz Inisiatief. http://www.gouritz.com/index.php?option=com_docman&task=cat_view&gid=34&Itemid=54 (6 September 2009 geraadpleeg).

—. 2009b. Interview notes for Mrs Ruida Stanvliet regarding the involvement of Dennis Moss and DMP in the UNESCO MAB Program. Ongepubliseerde dokument. Dennis Moss Partnership, Stellenbosch.

?. 2004. The UNESCO biosphere reserve concept as a tool for urban sustainability: The CUBES Cape Town case study. Annals of the New York Academy of Sciences, 1023:80–104.

—. 1996. Biosphere reserves: The Seville Strategy and the Statutory Framework of the World Network.Parys: Unesco.

—. 2000a. Solving the puzzle: The ecosystem approach and biosphere reserves. Parys: Unesco.

—. 2000b. Final report. Sixteenth session, International Co-ordinating Council of the Programme on Man and the Biosphere. Parys: Unesco.

3 ’n Oorgrensbewaringsgebied (TFCA – Transfrontier Conservation Area) word soos volg gedefinieer: “the area or component of a large ecological region that straddles the boundaries of two or more countries, encompassing one or more protected areas as well as multiple resource use areas” (http://www.peaceparks.org).