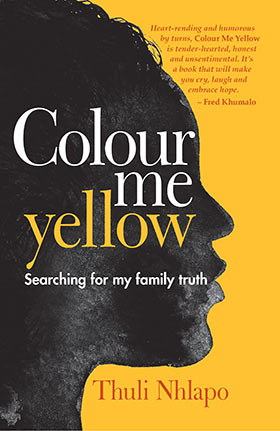 The book market in South Africa is glutted with memoirs at the moment. What makes this one stand out is the searing honesty with which the author explores harsh truths about her own identity and all that it entails. Thuli Nhlapo writes with eviscerating bluntness about her search for identity in a family that did not accept her from the moment she was born. She spares no-one in her family, not even herself, as she searches for her true origins. Thuli emphasises her desire for truth-telling in the opening chapter:

“If you have been lied to about your life by the very people who were supposed to have been honest with you, one thing you avoid as an adult is telling lies.”

Brought up in an extended family, living in a rural village called Tsebe, near Klipgat in Ga-Rankuwa, Thuli is surrounded by her paternal relatives. Thuli is ostracised and treated differently from as early as she can remember. Even her mother tells Thuli that she hated being pregnant with her and says her pregnancy was an embarrassment to her. The sense of her exclusion from the rest of the family is reinforced by the names her relatives call her. Each one is insulting, varying from “Mabovana” to “Boesman”, because of her yellow complexion, with her first teacher telling her she is as “yellow as a pumpkin”. Knowing she is different from the rest of her cousins, she resolves to keep to herself to try to stay out of trouble. The only problem is that she becomes a source of entertainment to her paternal grandmother, who takes great pleasure in making the young girl feel unwanted whenever she can. Thuli’s own mother treats her like an outsider, taking her husband’s side when Thuli’s father scolds her at every turn. She is belittled by all in her family from the earliest age. Initially, Thuli thinks it is because her mother was pregnant when she married her father. Eventually, though, she concludes that she must have another father altogether, as her parents treat her siblings, born in wedlock, as real family members, in contrast to their treatment of her.

The only person Thuli feels close to – the one who makes her feel at home as soon as she opens the gates to his homestead – is her maternal grandpa. He calls her by the name she likes most: Tho. She confides in him on the few occasions she’s allowed to see him, and he exhorts her to pray to his God, who he assures her will protect her. Her paternal grandmother, however, does not want her to spend any time with her mother’s family, and this is reinforced by her own mother. The visits to her maternal grandpa become rare.

Young Thuli vows to be as good as she can, not to cause trouble or embarrassment to the family in any way, and to work very hard at school. She wins her first competition by collecting more Nestlé condensed milk wrappers than any of the other school children and enjoys being admired and applauded when the winner is announced. She vows to win as often as possible to gain the admiration of those around her, rather than the scolding she’s become so accustomed to.

When life in the paternal rural village becomes unbearable for her mother, Thuli’s father loads up the whole family in one of his trucks and drives them to the border between Swaziland and Mpumalanga. Here, they set up a small structure overnight and plan to make a fresh beginning, far from the toxic jealousy of the paternal clan. They are in a forest area called Fernie. Fernie ushers in a new era for Thuli, who soon finds herself excelling at the small school where the locals go. She loves living so close to nature and enjoys the long walks to school. She begins to read voraciously and befriends their neighbours, kindly people, the Nhlabathis. However, none of these new changes soften her own mother’s attitude to her, nor does it change her father’s treatment of her. When her paternal grandmother decides that she, too, is coming to live in Fernie, close to her breadwinning son, Thuli’s heart sinks. However, the version of her grandmother that arrives is much softened and mellowed. Thuli and some of her siblings are put into a house nearby with her grandmother, and Thuli cares for them all as her grandmother grows weaker. Finally, her grandmother dies and Thuli is left with the children in the house. She survives with the help of her kindly neighbour.

Becoming ambitious about her future, Thuli decides that she needs to go to a more advanced school in Shoshanguve for her grade 12 year. She moves to stay with her father’s older brother and his wife, who are childless. Thuli’s life begins to expand somewhat. That is, until she expresses her desire to practise karate, which means she would wear pants, which goes against her father’s older brother’s strict religious rules. She is expelled from his house, but not before passing her matric. Thuli registers at Technikon Northern Transvaal (TNT). From this time on, her own journey begins, which includes a change of home again to continue studies at Mangosutho Technikon in Durban, and finally moving back to Johannesburg with a new baby. Throughout the journey, Thuli’s desire to find out who her real father is continues, and her answers are thwarted by the family.

Eventually, Thuli’s continual illnesses lead her to sangomas and finally to a prophetess, who advises her that Thuli must find her true ancestors, as the Nhlapo ancestors do not recognise her. Fighting against the many calls for her to follow the healing traditions of the sangomas, which are strong in her maternal family, she continues to seek the truth. Finally, finally, she comes close to the answer she longs for. She travels to an address given to her by an uncle. There, she meets a family – a white family. She is horrified to think that she is related in any way to these people. Unfortunately, the truth is even more shocking than this. Thuli Nhlapo embraces it bravely, understanding for the very first time the reason for her lifelong ill-treatment by her family.

This is a powerful book that has you spellbound, especially as the secrets are revealed towards the end. It reminds you, once again, that knowing your ancestry is all-important for healthy self-actualisation. This book is well worth the read.