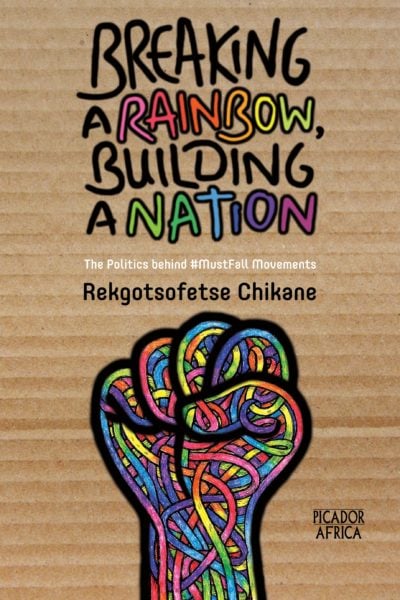 Intergenerational conflict is as old as mankind. It has always been part and parcel of the human condition, and it will remain so. The old and the new orders are usually at odds. It is the never-ending clash of the generations. And the old guard is almost always caught unsuspecting and, more importantly, unequipped to respond. This was particularly the case with the #MustFall movements that appeared on South African tertiary campuses from the year 2015. These student protests sent shockwaves through the country, and left friends, families and communities divided as to their merits. The unrest was well documented, and it was inevitable that books would eventually be written about the subject. Rainbowism was always due for revision. When the idea of the rainbow nation was first postulated, it was done within the parameters of the Christian religion, to which South Africa is overwhelmingly adherent. The rainbow was said to be the new covenant between God and the people of South Africa. Archbishop Desmond Tutu, who coined the rainbow nation concept and was chair of the Truth and Reconciliation Commission of South Africa, famously said, “We have looked the beast in the eye. Our past will no longer keep us hostage. We who are the rainbow people of God will hold hands and say, never again! Nooit weer nie! Ngeke futhi! Ga reno tlola!”

Very soon, God disappeared from the rainbow nation concept, and the rainbow came to symbolise the different skin colours of South Africa’s diverse people. But many South Africans never bought into the idea of a rainbow nation. From the outset, the concept was ridiculed by indicating that the colours do not mix in a rainbow, and that there are no black and white in the rainbow.

Not only was the rainbow nation up for revision, but even the legacy of former president Nelson Mandela began to be questioned, and continues to be, by younger generations frustrated with the slow pace of change in the country. Chikane is highly critical of the concept of the rainbow nation: “The rainbow no longer exists. Its hold on our national consciousness is being taken apart, piece by piece, by a generation of young people no longer enamoured of it, nor in awe of it” (242).

Breaking a rainbow, building a nation is painful reading. The book documents the disillusionment of young people with South Africa. Despite the idea that was created in the media that the #MustFall movements sprang out of nowhere, this was most definitely not the case. While the violence only really erupted in 2015, disputes over study fees were a standing matter for many years in the run-up to 2015. Tensions had been building up for a long time. The cost of university fees, coupled with a continuing apartheid infrastructure, gave rise to unprecedented student revolts, such as South African universities had never seen before.

Rekgotsofetse Chikane documents much of what transpired during this turbulent time. While the book cannot be said to be a complete record of all the events, it is a well-detailed account of the events, particularly from the perspective of a student at the University of Cape Town (UCT), where the statue of Cecil John Rhodes (1853–1902) became the main point of contestation in a movement that bore Rhodes’s name, #RhodesMustFall. Chikane played an influential role in the student protest, and was also involved in a march to parliament.

Chikane’s book details the events from his own perspective; however, the book is provided with detailed endnotes, suggesting a thorough investigation of the #MustFall movements. As the title suggests, the book is also not limited to UCT, as the unrest spread to many other universities, most notably the University of the Witwatersrand (Wits). But, despite Chikane’s efforts, the book has already received staunch criticism from within the #MustFall movements, in particular from one Zamayira Peter, who described the book as “opportunistic” and providing certain groups within the movements with too much significance.1 But, despite these objections, Breaking a rainbow, building a nation succeeds in documenting key moments of the #MustFall movements, such as #RhodesMustFall and #FeesMustFall, and the rationale behind many of the events that transpired. Even if one might disagree with the aims of these movements, it is still very much worth the read, as the book provides many insights into the student politics of the time. South Africa continues to be one of the most unequal societies, and, as such, social and political unrest will continue to be part of everyday life in the country.