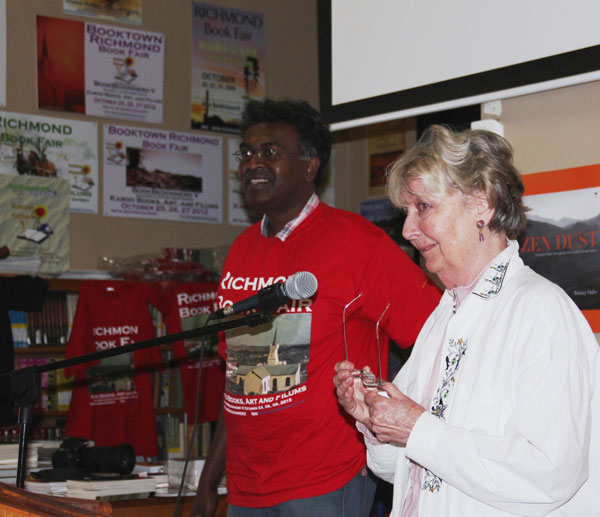 The JM Coetzee Festival is four years old. What is it? Where is it? Darryl David  tells Naomi Meyer about Booktown Richmond, the very centre of the literary universe in the Great Karoo.

Hi Darryl! It's nearly the end of May again and time for Booktown Richmond's 8th anniversary. For any of our readers who have never heard of this festival, how was it born?

Hi Naomi. Yes, it is our 8th anniversary. But our 8th anniversary as the national Booktown of South Africa. Every October we hold our now famous BookBedonnerd Literary Festival. It attracts thousands of bibliophiles. Nowhere near as big as a Woordfees or Franschhoek, but we still like to think of ourselves as the very centre of the literary universe out here in the Great Karoo. 🙂

Now every May we host the JM Coetzee Festival. This festival is four years old. At this festival we celebrate one of the world’s greatest novelists. But also all South Africa's Nobel laureates: Luthuli, Mandela, Gordimer, Tutu, FW de Klerk and even the lesser known medical laureates.

But it’s complicated. Back to back with the JM Coetzee Festival we host the Fugard Festival. Athol Fugard, as your readers might know, is probably the world's foremost dramatist. The Fugard Festival is our laatlammetjie! Only two years old. We adopted this orphaned festival from Nieu-Bethesda because the Karoo has played such a prominent role in the late phase of Fugard's life. And we did not want the Karoo to lose such an iconic festival to the big cities.

So you see, many a truth is said in jest. We are at the centre of the literary universe in South Africa. 🙂

And how beautifully your literary child has grown. Please tell us about this year's festival highlights.

On the Fugard side, everyone is looking forward to the screening of the DVD Falls the Shadow: The Life and Times of Athol Fugard.

Liesl Jobson will be making her way to Richmond, this time as a speaker, as one of the first journalists to cover the booktown phenomenon. This time she will read poetry, play the bassoon. And she will be interviewed by her dad on the role of the home and music in her poetry. It promises to be utterly fascinating.

Robert Ian Caldwell and Jeff Judge, who have performed all over the world and 21 times at the Grahamstown Arts Festival, will be performing two shows:  A Pair of Green Ous and Richmond Potpourri.

Thomie Holtzhausen will satirise Georgy Porgy in his play of the same title. It’s the story of a Karoo dominee's coming of sexual age in a small Karoo town.

Personally, I am looking forward to Dear Mrs Steyn, featuring Alison Cassels, about the epistolary relationship between Emily Hobhouse and President Steyn's wife.

And then my good friend Judge Chris Nicholson will make his stage debut in Chris Nicholson Unwired! All I want to say on the matter is that when you stumble away from the show in high spirits, I will take credit for unearthing one of the great raconteurs in South Africa.

From this line-up you will see that we have no Afrikaans productions. It seems as though everyone goes to the KKNK and then tours all the other festivals like Woordfees, the Clanwilliam Kunstefees, the Suidoosterfees and Aardklop. I would really like to encourage Afrikaans artists, though, to join us next year. When ABSA sponsored the festival at Nieu-Bethesda, the line-up was predominantly Afrikaans, so we hope that will resume from next year.

I would like to place on record, though: we did not “steal” this festival from Nieu- Bethesda, because I sometimes worry that people are boycotting the festival. We revived it after ABSA withdrew its sponsorship and the festival did not take place in 2012.

On a more positive note, we are looking forward to seeing the man who's gyrations have earned him the nickname Akkedissie. Yes, Jan Isaacs aka Boeta Gammie aka the Elvis of the Namaqualand will rock Richmond on the Friday night. And entrance is free. In fact, virtually all our talks and performances are free.

On the JM Coetzee side, Marianne de Jong will give a talk on a subject everyone has been crying out for: Coetzee's latest novel, The Childhood of Jesus.

Karen Jennings, author of Finding Soutbek, will give a talk on Coetzee's novel Slow Man. 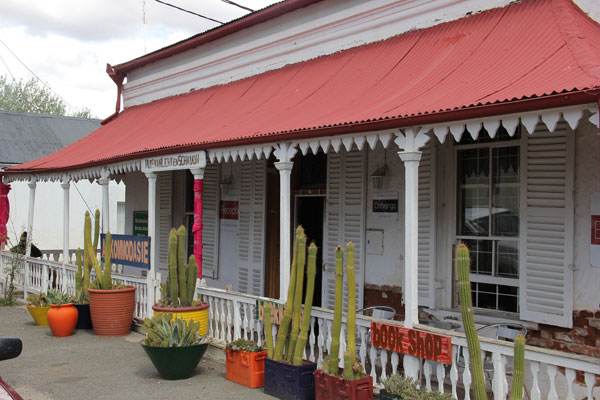 I might give a talk on the role of letters in Coetzee's oeuvre. I say “might” because the programme is jam-packed, but if a writer lets us down and does not pitch, I will be ready.

Luli Callinicos will present a talk on her Oliver Tambo biography, and then later on, a talk on The World that Made Mandela. This, I know, is a talk many are looking forward to, as Luli takes us on a visual tour of the places that shaped probably the greatest man of the last century.

Another Mandela-themed talk will be presented by Trevor Webster based on his recent book about Healdtown, the mission school that shaped the young Mandela.

Doc Robert Caldwell will try to convince us he has a serious side in what should be a riveting talk based on the book The Dark Lady of DNA.

In between all this serious stuff Chris Nicholson will once again entertain us with stories from his debut short story collection.

And Nick Norman, the man who has almost single-handedly made rocks sexy in South Africa, will talk on his best-selling book Geological Journeys.

André Kruger comes to Richmond with a weight of expectation on his shoulders. Last year he won the UJ Prize for best debut work for his novel Die twee lewens van Dieter Ondracek.

Pieter Scholtz, retired professor of drama at my university (UKZN), will present two talks. One will be a reading of his short story anthologies, including one based on a country graveyard, of all things. And his second talk will be on his anthology of haiku poetry entitled Haiku to Rapunzel.

We are most thrilled to have well-known TV personality and author Patricia Glyn join us. Patricia will take us on her emotional journey with a well-known son of the Northern Cape, Dawid Kruiper, in her book: What Dawid Knew: A Journey with the Kruipers. This book has just been longlisted for the Alan Paton Prize and already I know of two people who are driving great distances just to hear Patricia.

And if that isn't enough to get you to Richmond, remember that all but two of our talks are absolutely FREE! 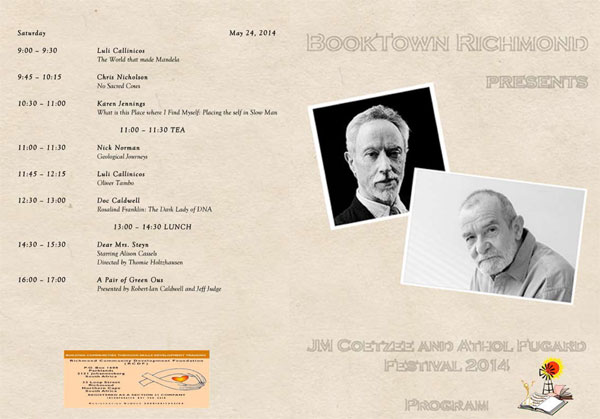 If somebody wants to attend the festival, who can they contact regarding accommodation and tickets for events?

Personal question: You write yourself – and I understand you love church buildings! Please tell us about your own writing. Has your second book already been published? (And what is it about?)

My books? I think I have one great novel in me. But that's the problem. It has yet to find its way on to paper! But my great love – churches of South Africa – there I have been more productive. In 2010 I published, together with Philippe Menache, 101 Country Churches of South Africa. I think it is testimony to the love that people have for this book that you won't find a single copy in a second-hand bookstore. And then, in 2012, we published our second book, A Platteland Pilgrimage. If I must say so myself, this is a thing of beauty. People like Jenny Crys-Williams fell in love with the book.

And now we are planning our final instalment. It will be launched at Booktown Richmond (where else?!) in October 2015. After Platteland Pilgrimage we were mentally exhausted. So we deliberately decided to do very little for two years and see how we feel. I've told Philippe that since he is over 60, this must be our lasting legacy to church history in South Africa. But first I need to buy a camera! I will now have to search for God through the viewfinder of another camera, which breaks my heart!