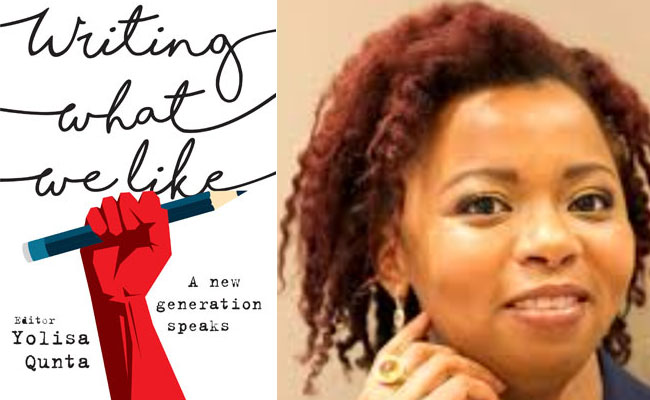 For a white person, reading Writing what we like: A new generation speaks might feel like gatecrashing a party where some ugly truths will be revealed about you. Provocative and penetrating, Writing what we like is a difficult book to review when you happen to be white, because one feels that one should not be talking at all, but listening only. One is torn between possible accusations of one’s own “intellectual arrogance” and the need for dialogue. And yet, a way to disrupt entrenched ways of thinking and to establish connections across barriers imposed on us by a turbulent and harrowing history is to try to imagine ourselves into the skins of others. That is where creativity and empathy begin – in writing, reading and interpretation – where we cease to view ourselves in any other categories but human. The ultimate goal is understanding, coupled with compassion. Everything else will follow from there.

If there ever was a timely book, Writing what we like is definitely it. It is the brain child of Yolisa Qunta, who over the period of the past two years interviewed and collected essays written by her fellow young black South Africans for this remarkable publication. Only a few of the pieces first appeared elsewhere.

Qunta was concerned about the “dearth of books” published by her black peers and felt “duty-bound to record” their lived experience of transformation. She hopes the book will “help to shape the debates currently taking place in the workplaces and the bars, and over dinner tables ekasi and in suburbs across the country”.

The volume represents fascinating and incisive slices of contemporary life in South Africa. Several themes are tightly woven into the fabric of the book: disillusionment, economic injustice, frustrations of the young, and their dreams and hopes, their confrontation with reality, often resulting in despair at the lack of opportunities. In “The gift of hope”, Thando Ntoi writes: “Freedom means different things to different people. For me, it is the ability to live my life with hope.”

Writing what we like is subdivided into six sections. In “Different shades of black”, authors interrogate privilege, the job market, identity and gender. As Seitiso Ntlothebe notes, “The only way to sort out our problems in South Africa is by acknowledging the elephant in the room. By ignoring it, those whose progenitors travelled to our shores for the sole purpose of pillaging do not have to feel uncomfortable about their wealth. Why do we keep up the pretence that all is well in South Africa?” Struggling to find employment beyond endless offers of internships which lead nowhere, Ntlothebe writes about having to survive on only the “crumbs” of the “cake of hope” baked in 1994.

In contrast, Thando Ntoi finds herself in the enviable position of being able to quit her job when it no longer fulfils her because she is financially secure enough to do as she pleases. For her, the country has become “a place where self-actualisation is a real possibility”. But she knows what sacrifices people had to make in order for her to feel this way, and she is aware of other pitfalls women face in the contemporary world, like “intimate femicide, the killing of women by their partners”.

In the section titled “What we have struggled for”, authors confront the topics of reconciliation and reparations, upliftment of rural communities, feminism and racism: “As black South Africans, we need to admit that we are angry and have every reason to be,” writes Qunta. In “Spider’s web” Qunta speaks of “the affliction of always wanting to do the right thing. Even though I could not articulate what it was, something about the carefully packaged transition from apartheid to freedom through Codesa and the Truth and Reconciliation Commission’s all too brief attempt at being a Band-Aid rankled me.”

What strikes me most about many pieces in the collection is that the authors are not afraid to voice even the vaguest of feelings, because very often that is where our greatest knowledge lies – in intuition. Only the brave can follow its lead. While we struggle to define our identities, find a language that best expresses them, we are still groping for answers. But even if not everything can be articulated at once, the texts included in this book make one think and reconsider, and that is what counts. There is a palpable signal for a need to engage, and there are no sacred cows in this collection. Several writers have no problems with tackling and redefining images and meanings of Mandela’s legacy and talking about the failures of the transformation process. It becomes obvious how colonialism has eroded traditional African values and community structures. The remaining reality is clearly difficult to negotiate for all concerned. Authors interrogate privilege, the expectations placed on them by their families and the resulting pressure to make it in previously inaccessible working environments.

The section “Romance in the time of freedom” includes stories about dating below one’s own income bracket, lobola negotiations, and what it means to be a sub in South Africa. “It’s not only annoying that being a sub is now associated with that badly written book that’s soaked in abuse, but it targets people who are going through what we call a sub frenzy,” writes Tshegofatso Senne about the Fifty shades of grey phenomenon. She warns: “Putting yourself in harm’s way by making yourself vulnerable to someone who doesn’t know what the fuck they’re doing, however, is a problem – one that becomes serious when the person to whom you relinquish control cares more about his or her pleasure than your comfort.” She continues: “In a nutshell, I want people to have the sex and get the love they deserve.”

Deadly serious or humorous, the texts reveal the complexities of our social tapestry. In “Mergers and acquisitions” Owethu Kheli talks about the costs of lobola in the modern day and age: “At one stage, I considered going to the house next door to find a wife instead. Or marrying a white woman, whose dad would have the pain of funding a lavish wedding with no lobola.”

“Seeking enlightenment” encompasses essays about untold histories, language as a basis for “re-imagining Africa”, belonging, and transformation at universities. In “White supremacy vs transformation” Siphokuhle Mathe writes about denial of white privilege and how discrimination is “sanctioned by institutional culture”: “Privilege allows you to skirt the issues while pain of the marginalised demands to be felt.” In “The post-apartheid colony: Rhodes must fall”, Mathe depicts the key events of the movement which began at UCT and exposes the multifaceted nature of its development, being constantly aware of the need to remain critical of what transpires.

Writing about identity and belonging, Sentletse Diakanyo states that the “term African refers predominantly to a racial identity and goes beyond the sentimental claim that being born in a certain geographical location – somewhere on the African continent – makes you African … The claim that we are all Africans because Africa is the cradle of humankind is also absurd: people in the rest of the world do not refer to themselves as Africans” (“Defining ourselves”).

“Comic relief” comprises Loyiso Gola’s take on Nkandla and Qunta’s observations about taxis in South Africa as well as her Q & As with David Kau and Sivuyile Ngesi. In other parts of the collection, Qunta also writes about her reasons for not wanting to participate in the activities of Mandela Day, and her experiences of dating “to find a husband”.

The last section of the book, “Thinking beyond privilege”, includes Ilham Rawoot’s story about the failures of the Cape Town Partnership to include all concerned citizens in the debate surrounding projects related to the World Design Capital campaign. Sibusiso Tshabalala addresses the language policies which marginalise people in broadcasting, Fezisa Mdibi talks about sexuality, sex and HIV, and Haji Mohamed Dawjee, asking why people can walk their dogs but not their children, writes about the lives of domestic workers and their employers.

These are all vital topics and it is clear how crucial it is for debates around them to continue. As Lwandile Fikeni states, “[R]ealities are forever shifting; at times, they appear not to be as black and white as one would like them to be.” I would welcome a collection of this kind every year or two. Highly informative and of great relevance to the way we see ourselves, Writing what we like might be the beginning of an important tradition. And perhaps one day there will be no need for exclusion. Qunta sounds a warning: “This is why we need to work overtime to fix this broken system – or be swept away in the coming tide.”