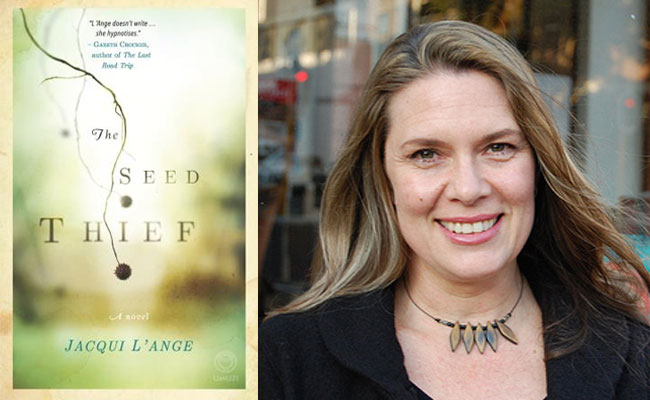 There are writers and then there are writers. Most of us can only dream of becoming the kind of writer Jacqui L’Ange already is, and the stunning The Seed Thief is only her debut novel. Her prose is luminous. It feels as if her words are caressing the pages they are printed on. Enthralled from the beginning, I was reading with bated breath, afraid that the author could not sustain such excellence through an entire novel, that she would take a false step, get lost along the way, and lose me as a reader. But The Seed Thief is one of those rare books which deliver on all fronts and leave you completely satisfied.

The novel tells the story of Maddy Bellani, a South African botanist with migratory roots. She works for one of the world’s seed banks in Cape Town, specialising in fynbos and dedicated to preserving the floral diversity of our planet for future generations. Brazilian by birth, Maddy is sent on a mission to Salvador, Bahia, to locate and secure the seed of the Newbouldia mundii, an African tree extinct on its continent of origin, but rumoured to have survived in Brazil, where it had been taken to by Africans during the slave trade. The plant is desired not only for preservation, but specifically for its medicinal properties. And some people are prepared to do anything to get their hands on it.

Maddy embarks on the mission after the break-up of her relationship with Nico: “Only now that it was finally ending, could I admit how much I’d wished we could have turned the mutual vulnerabilities that brought us together into something less fragile.” She is haunted by a family tragedy from the past and the relationship with her estranged father who finds out about her visit to their home country and attempts to get in touch: “Just knowing that he knew I was here made my emotional barometer plunge.”

Keen on redefining herself in Brazil, Maddy flies to the other side of the world in pursuit of the elusive Newbouldia mundii. The seed is protected by the practitioners of Candomblé, an Afro-Brazilian religious community worshipping gods and goddesses called orixás. Negotiating their different customs and loyalties is not easy and, as Maddy discovers, sometimes what you get in the end is not exactly what you set out to find.

Seeds are like love, unpredictable in the paths they travel. They take root in the most unlikely places, often against all odds. In order to gain access to the treasure she seeks, Maddy has to gain the trust of the Candomblé terreiro (the house of worship) and Zé, the mysterious man who guards their garden: "The rhythm of our interaction became a gentle ebb and flow. He would open up and play, then retreat and observe. Whenever he retreated, I found myself wanting to follow, to draw him back out and close to me. When he came in too close, I pulled back just enough for him to gather himself like the tide.”

Plants and seeds are as much characters in the novel as humans. L’Ange shows how vital their preservation is for all the inhabitants of the planet and what scary consequences our recklessness with our precious resources might have for the future. The politics behind preservation and the pharmaceutical applications of plants is just as terrifying. In this respect, The Seed Thief is clearly a green novel, but its global themes are carefully interwoven with the plot, so that the book is never preachy.

Moreover, The Seed Thief is laced with illuminating literary and historical references, enriching the texture of the first-person narrative. Its portrayal of Candomblé spirituality, Brazilian landscapes, legends, architecture, culture, cuisine and the people who inhabit it all opens up new worlds to the reader. L’Ange’s descriptions are very sensual. One experiences Maddy’s journey with all the senses, in particular smell, as she has a very fine nose. The characters are subtly drawn; their relationships authentic and fascinating. The tension of the plot is perfectly taut throughout. Stylistically, the novel is flawless.

In Polish, we have tęsknota: a longing which can range from intimate to national proportions. Portuguese has saudades: “That’s what Brazilians call this affliction. Sow – daa – jeez. The stretched middle vowel hangs like a hammock, weighing down the word. A longing for something that may not exist outside of sentimental imagination. The very concept requires a sleight of mind.”

If there is such a thing as a prose of saudades, L’Ange’s lush storytelling is it.