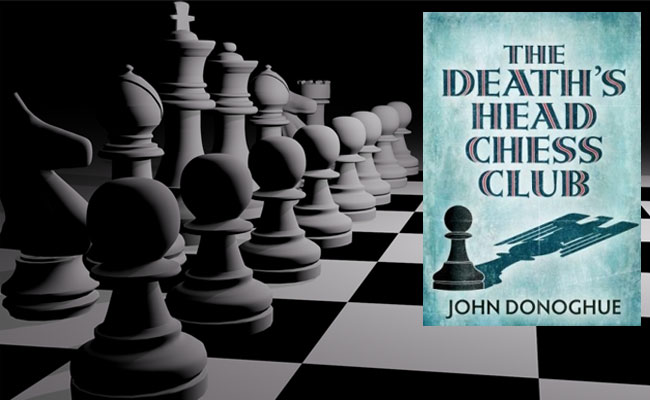 A friend has recently suggested that my reluctance to read Second World War novels might be similar to many South Africans’ reluctance to read apartheid fiction, and that saturation might be at the heart of it. True, having grown up in Poland and Austria, I have heard, seen and read plenty about the war – the stories as related by both sides. It is not that I shy away from the horror, even though after having visited the Mauthausen concentration camp as a teenager I was unable to accompany my husband when he wanted to see the concentration camp in Auschwitz (throughout, I sat very still in a coffee shop just outside and wept without going in). Imagination and empathy can be deadly for a soul. But I understand that these (hi)stories must be told and listened to. Today, in the midst of xenophobia, racism and violence, we need to grasp, perhaps even more than ever, what is at stake when we declare others as subhuman.

When John Donoghue’s The Death’s Head Chess Club arrived for reviewing, I decided to suspend my unwillingness to read about the Second World War and give three novels set around the time a chance (the other two being Kate Atkinson’s recent A God in Ruins and Markus Zusak’s The Book Thief, published in 2005, both highly recommended by friends). As always, though, it took a while for me to overcome my hesitation. Even if they are “only” fiction, at the root of such novels is a reality where pure evil manifests in human form and, as Donoghue’s narrator notes, the voices of the dead “clamour to be heard”. This is precisely why the task of imagining these stories bears a great responsibility and should not be undertaken lightly.

In The Death’s Head Chess Club three men form an unlikely alliance when they meet in Amsterdam nearly two decades after the war. One of them is dying, one does not know how to live, and one has existed for much too long in careless oblivion. But they are all survivors of one kind or another. The Frenchman Emil Clément and the German Willie Schweninger find themselves on the opposite ends of a chess board competing for the title of world champion. As they play, Paul Meissner looks on, hoping for redemption. A former SS officer who had served in Auschwitz, Paul remembers Emil as the Watchmaker, a nickname given to him in the camp because of his profession. During the war Emil became “guilty of a crime for which there can be no pardon: he is a Jew”.

The narrative swings between the early 1960s and the time around the Second World War, especially the years of Auschwitz. Trying desperately to survive the camp and preserve a shred of dignity in a world where all rules of human engagement have been turned upside down, Emil takes care of his only friend Yves, and finds fragile hope in the opportunity to play chess with other prisoners. For him, the game is divine and playing is “an act of worship”. When the rumour that he is unbeatable reaches Paul and the SS, who’d been encouraged to “take an interest in higher culture” by starting a chess club, Emil is ordered to risk his and his inmates’ lives playing against the officers.

Relying on historical sources, Donoghue describes camp life – and death – in great detail, as power struggles and lethal intrigues evolve. Historical figures feature on the periphery of the narrative. But the chess club, the main characters and their (post-)war experiences are fictional. However, like many survivors and some perpetrators, Emil and Paul find themselves on a guilt-ridden journey in search of meaning: “In Auschwitz the good are punished, the evil flourish, and the victims, not the perpetrators, are the ones who feel guilty. It is incomprehensible but true.”

The book does not deliver on the promise of its central ideas. The jumps between the war and post-war years are often clumsy. The novel is interspersed with highly irritating footnotes which could easily have been integrated into the main body of the narrative. Donoghue is good at telling, but not so much at showing, and large chunks of the story read like non-fiction. Many of the dialogues are artificial, and some of the emotional and psychological content remains underexplored. Far too often, pivotal scenes do not ring true, despite obviously good intentions. Such failures cannot be easily dismissed in the face of the enormity of the topic, especially not if one knows how exquisitely it can be handled. For an in-depth representation of the war and post-war experience, exquisitely told, I recommend Atkinson’s sublime A God in Ruins, which I’m reading with great pleasure right now.